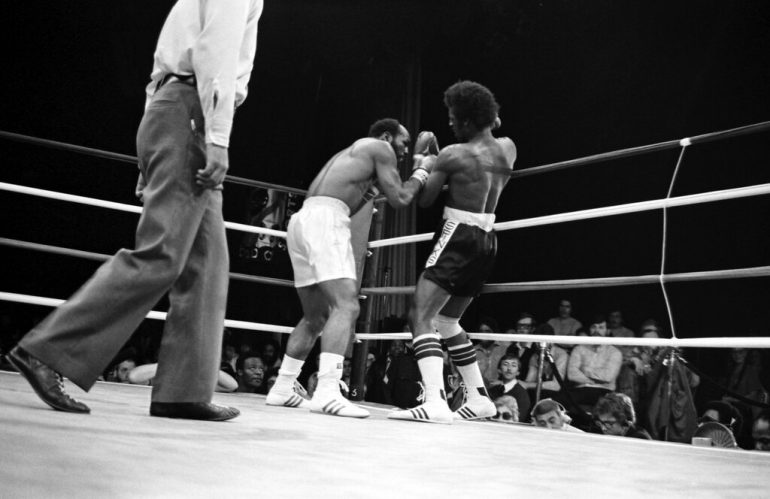 Spinks (right) lands the finishing blow on Marvin Johnson in their March 1981 bout. Photo by The Ring/ Getty Images
28
Mar
by The Ring

The first three rounds were competitive with Spinks, a former Olympic champion, struggling to find the range for his vaunted right hand. The finishing blow – a perfect left uppercut on the inside – came out of nowhere. The official time was 1:22.

“He bowed his head and I saw [the opening,]” said Spinks during his post-fight interview with ABC’s Howard Cosell. “[It was] picture-perfect and I took it as soon as I saw it, right then and there. It was beautiful – it felt good to do it. I hate that he went out that way. I saw his chin asking for a good left hand.”

The 16-0 Spinks was heading toward a world title shot and there was hype surrounding a potential matchup with The Ring and WBC champion Matthew Saad Muhammad. However, four months later, Spinks won a 15-round unanimous decision over Eddie Mustafa Muhammad to claim the WBA version.

In March 1983, Spinks became undisputed champ by outpointing Dwight Muhammad Qawi – who had dethroned Saad Muhammad – in Atlantic City. That victory and a further four title defenses established Spinks as one of the finest 175-pounders of all time.

Johnson, who entered the bout as The Ring’s No. 5 rated light heavyweight, bounced back with 14 consecutive wins. In February 1986, the Indiana-born southpaw won the vacant WBA 175-pound title by stopping Leslie Stewart in seven rounds. He defended successfully once before losing the title back to Stewart (TKO 8) the following year. It was Johnson’s final fight. He retired with a 43-6 (35 KOs) record.