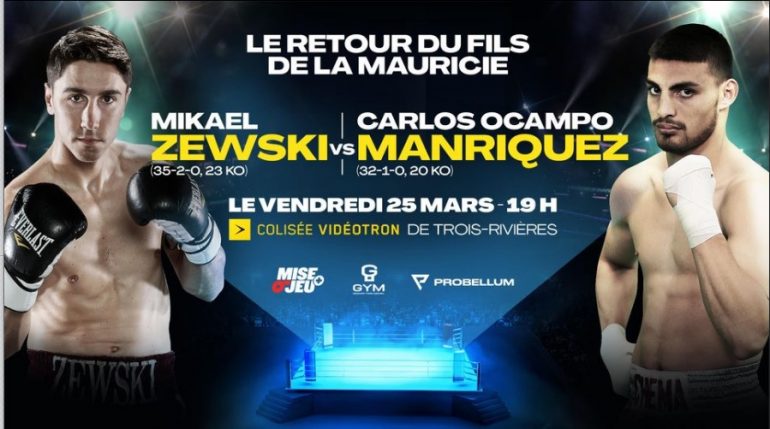 It was a homecoming for Zewski, who resides in Trois-Rivieres. Friday was his first ever professional fight in his hometown but it was anything but a celebration as Ocampo mostly dominated the action from the opening bell.

Ocampo was the more effective fighter, landing almost at will against Zewski, who never really got going. Anytime Zewski connected, Ocampo would fire back two or three-punch combinations to the head and body.

Midway through the third round, Ocampo dropped Zewski to the canvas. Zewski beat the count but did not mount a serious offense for the rest of the fight.

As the fight progressed, Ocampo kept his hands down, almost as if to entice Zewski to initiate exchanges so he could counter. Zewski would land an occasional lead straight or right cross to the head but Ocampo fired back, putting Zewski on the defensive.

About midway through the ninth round, a counter right hand dropped Zewski to one knee. Referee Alain Villeneuve began administering an eight-count but waved the fight off at 1:49 after Zewzki’s father and trainer Jean Zewski threw in the towel.

The Ocampo-Zewski fight was a clash of former welterweight contenders who are trying to make a splash in the ultra-competitive junior middleweight division. Ocampo has now won his last 11 fights since losing to Errol Spence Jr. in June 2018. Ocampo failed in his attempt to win Spence’s IBF welterweight title.

Zewski (35-3, 23 KOs) defeated Mexico’s Dilan Loza by unanimous decision in his previous fight on August 28. The victory over Loza was almost a year after Zewski lost by stoppage to former WBO welterweight title challenger Egidijus Kavaliauskas.

The loss to Ocampo was a setback for the 33-year-old. In a post-fight interview, Zewski said he would sit down with his family and discuss what the future holds for him.

Junior welterweight prospect Movladdin Biyarslanov, who was born in Russia and now resides in Toronto, Canada, improved to 10-0 (8 KOs) by stopping Mexico’s Roberto Verdugo (10-4-1, 4 KOs) at 1:00 of the fourth round.

In welterweight action, Marie Pier Houle, of nearby Terrebonne, defeated Serbia’s Valentina Keri (5-6) by unanimous decision. Scores were 60-54 twice and 59-55 for Houle, who improves to 6-0-1, 2 KOs.

The card was co-promoted by Groupe Yvon Michel and Probellum.