Katie Taylor is ready to show her best against Amanda Serrano 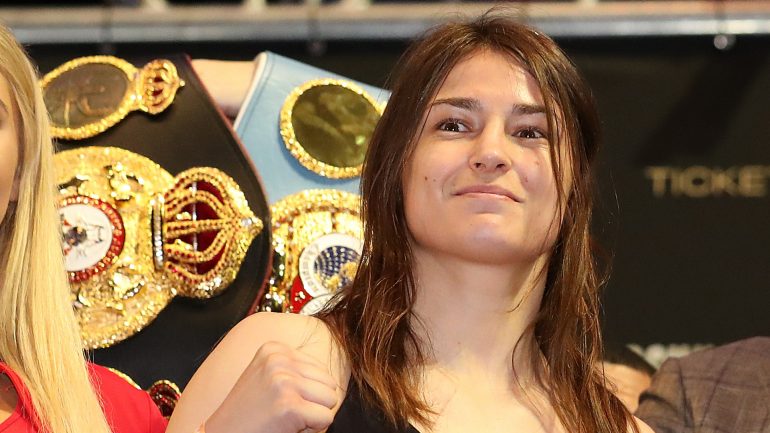 Katie Taylor hasn’t seen her. Amanda Serrano may not want to see her. But there is an invited guest to the historic fight for Taylor’s undisputed lightweight championship on Saturday, April 30, at Madison Square Garden in New York, which is being shown live worldwide on DAZN.

Whether or not that guest shows up is on Taylor (20-0, 6 knockouts). The Ring’s lightweight champion and No. 1 pound-for-pound female fighter in the world has never seen the best version of herself.

The boxing world may see something never seen before: The best Katie Taylor.

“This fight will be talked about for years and years from now,” Taylor said. “I don’t think the world has ever seen me at my best. I’m preparing to be the best version of myself, and I don’t think I’ll have to do anything to re-invent myself. I’ll go in there being myself and box the way I know I can box.

“We’re both preparing of the best versions of ourselves. I think my best is still out there. I’m not too sure what the best version of me has been. I have had a couple of really good performances, but people haven’t seen the best of me yet. I would say people have seen about 70- or 80-percent of the best of me. The closest I think I came to being my best came in the rematch against (Delfine) Persoon (in August 2020). That rematch was a great showcase, and I was very satisfied after that fight, too.

“I would put in there the Christina Linardatou fight, too. But the Persoon rematch was the fight I came away the most satisfied about. I guess you can say that was close to my best.”

Taylor will be defending her undisputed title for the sixth time, since winning them in June 2019 in a war with Persoon, then beating Persoon again in the rematch. Taylor has already vanquished challenges of Miriam Gutierrez, Natasha Jonas, Jennifer Han and Firuza Sharipova – and a win over Amanda’s sister, Cindy, in Boston back in October 2018.

“Amanda is a great challenge,” Taylor said. “I know she’s a heavy puncher and she’s a solid all-around fighter. But she doesn’t have anything I haven’t seen before. I’m looking for a great challenge and a great fight. I’m not concerned what she’s thinking. It would be a huge mistake to underestimate any opponent in a fight of this magnitude.”

Hopefully, we may see someone in the ring we haven’t seen before—the best Katie Taylor.