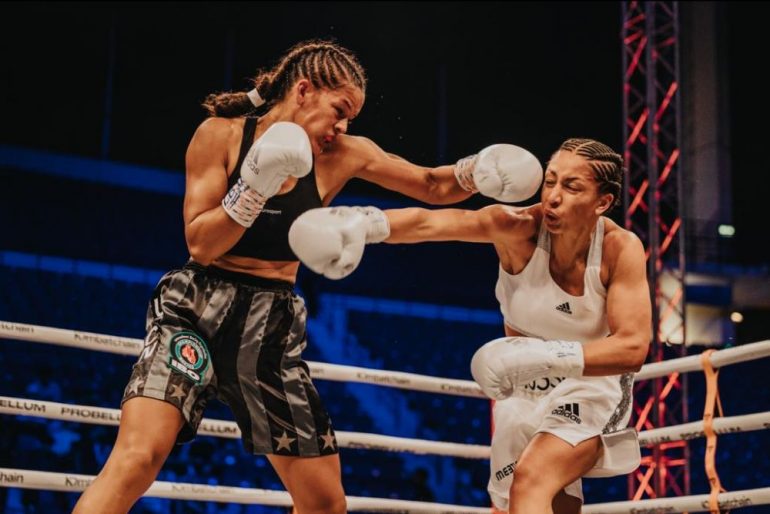 Estelle Mossely scored with a split decision victory over Yanina del Carmen Lescano at the Duty Free Tennis Stadium in Dubai, United Arab Emirates after 10 rounds, in a historic fight that pitted two women on a boxing main event for the first time in history in the Middle East.

The fight lived up to expectations, with both fighters trading heavily throughout the bout, and both rocking each other in more than one occasion. At the end, the judges were split but two of the officials gave the nod to France’s Mossely, with scores of 96-94 and 97-93, while the other gave it to Lescano with a score of 96-94.

The 29-year-old Mossely, who had won an Olympic gold medal in the London 2016 games and is currently rated at No. 3 as a lightweight by The Ring, admitted that she will need at least two more fights before she is ready for a contest with either Katie Taylor or Amanda Serrano, who meet next month in New York.

“It was a hard fight, I had not fought in more than a year and she was very tough,” Mossely, now 10-0, said after her win. “I must have two or three more hard fights to be ready for a (title) bout with either Taylor or Serrano.”

Argentina’s Lescano, 26, was bitterly disappointed with the judges’ decision and was adamant she had done enough to beat Mossely. She gave a good account of herself in a competitive fight against a much more experienced opponent.

Earlier in the night, Jono Carroll stopped Ghana’s Patrick Ayi Aryee in four rounds fought at a furious pace. Carroll, a former title challenger, was vastly superior than Aryee, who was fighting outside his native country for the first time.