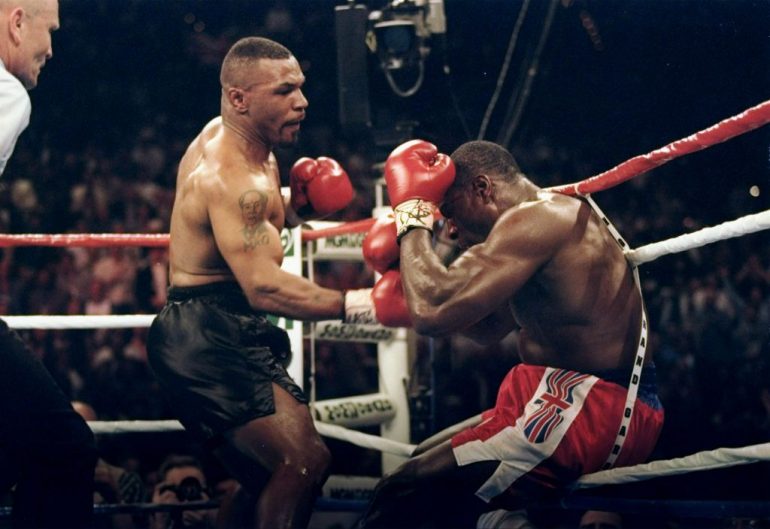 Tyson (had an even easier time with Bruno second time around. Photo by Al Bello/ Getty Images
16
Mar
by Ring TV

Following championship defeats to Tim Witherspoon, Mike Tyson and Lennox Lewis, the likeable Bruno looked doomed to failure. However, his unlikely triumph over McCall, before an estimated crowd of 23,000 fans at Wembley Stadium, had some Brits believing “Big Frank” possessed superpowers.

His next opponent, the all too familiar Tyson, did not read comic books.

On March 16, 1996, Bruno made his first defense of the WBC title against the very man who had battered him to a fifth-round stoppage loss seven years earlier. Bruno had performed well in the early stages of that fight, briefly rocking a rampaging Tyson in the opening round, but the punishment coming back eventually took its toll.

There were no moments of heroism in the rematch. Tyson wobbled his opponent with a huge right hand in the closing seconds of Round 1. That one shot cut Bruno over the left eye, a wound that would eventually require plastic surgery, and for all intents and purposes, the fight was over.

Bruno foxed his way through the second round by attempting to manhandle Tyson and was warned several times for clinching. However, early in Round 3, Tyson scored with a right to the body and a left hook the head – a combination that opened the stricken champ up to an avalanche. Ferocious right uppercuts and hooks from both sides had Bruno helpless against the ropes, when Mills Lane stepped into save the Englishman from further punishment. The official time was 0:50.

It was the final fight of Bruno’s 14-year professional career.