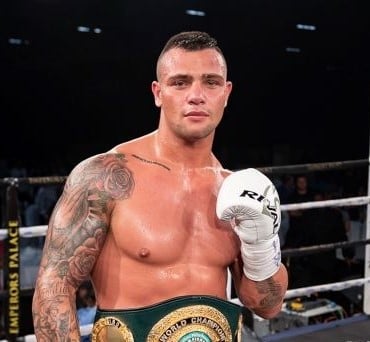 Lerena, who made his name as a world-rated cruiserweight, welcomes the new challenge that Dinu will present.

“It’s a real legitimate heavyweight debut fight,” Lerena (26-1, 13 knockouts) told The Ring. “He’s fought the likes of Jarrell Miller, Kubrat Pulev and Daniel Dubois. So, when I beat him, it’ll show the heavyweight world that I’m a serious contender and that I’m a force to be reckoned with and respected in the division.

“Bogdan Dinu is tough competitor, he’s a nice boxer. We’ve got to work hard, move our head, be evasive, be elusive, be smart and when I’m smart, take my time, I’ll find the mark and then I’ll work it from there.

“I have to be on my ‘A’ game and I’ll have to really put in a good performance to beat him.”

The 29-year-old southpaw had been zeroing in on a cruiserweight title shot but felt the time was right to move up in weight.

“I was struggling to make the weight for the last four-years,” admitted Lerena, who says he will weigh around 230-pounds. “I’d outgrown the weight division. At what point in my career was it going to be an injustice to my performance to cut all that weight?

The broad shouldered South African believes now that he’s at heavyweight he can focus on the task in hand.

“The skill set, the technique and fundamentals haven’t changed but it’s one less thing to worry about the weight cutting,” he explained. “That’s the only thing that’s really changed. It’s just taking out the element of losing weight and eating for performance as opposed to eating to lose weight.”

Lerena is well rested, coming off a 15-month layoff for a variety of reasons, but hopes to be more active moving forward.

“I had a hand injury that put me out for six-months and then Covid,” he said. “So, I’ve used this time to really develop my boxing skills and to work hard in the gym. I’m looking forward to getting going now.

“I’d like to have three fights this year. Three creditable opponents, pushing me into the top 10 in the world. Once I’m in the top 10 we’ll see from there.”

Rodney Berman of Golden Gloves, has been the premier boxing promoter in Africa since the 1980s and has handled the likes of Brian Mitchell, Welcome Ncita and Vuyani Bungu.

The veteran promoter is excited at the prospect of adding Lerena to the heavyweight mix.

“Lerena is a breath of fresh air in the heavyweight division,” said Berman. “[He has] matinee looks, [he’s] articulate, a committed paramedic to boot.

“His skills and Mike Tyson-style will more than compensate for his lack of height [6-foot-1.]

Dinu (20-3, 16 KOs) turned professional in 2008. The Romanian won his first 18 fights before tasting defeat for the first time against Jarrell Miller (KO 4) in November 2018. He then lost for the second time against Kubrat Pulev (TKO 7) in March 2019. The 35-year-old has rebounded with two low-level wins, before losing last time out to Daniel Dubois (KO 2).