Vergil Ortiz Jr. is ready for Michael McKinson and a busier 2022 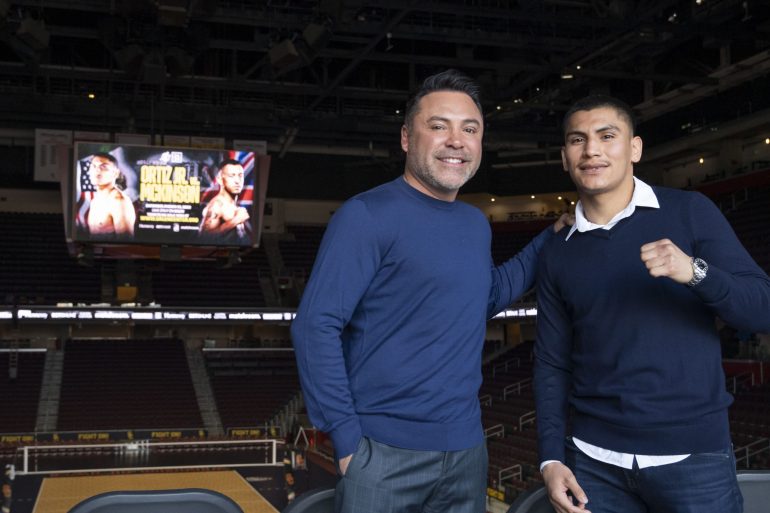 Oscar De La Hoya and Vergil Ortiz Jr. inside the Galen Center on the USC campus, where Ortiz will take on Michael McKinson on March 19. Photo by Lina Baker / Golden Boy
15
Mar
by Doug Fischer

Vergil Ortiz Jr. has a lot going for him. He’s powerful, technically sound, dedicated, and battle tested at a young age.

The only thing The Ring’s No. 5-rated welterweight doesn’t have going for him currently is activity.

Ortiz (18-0, 18 KOs) fought four times in 2019, including impressive KOs against three veterans – Mauricio Herrera, Antonio Orozco and Brad Solomon – which earned him The Ring’s Prospect of the Year award. 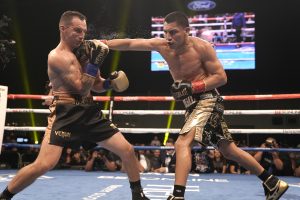 However, his career momentum was stunted by the COVID pandemic. The native of Grand Prairie, Texas only fought once in 2020. Ortiz fought twice last year and he made those bouts count by taking on and stopping former 140-pound beltholder Maurice Hooker and hard-punching former welterweight title challenger Egidijus Kavaliauskas, but developing boxers in their early 20s should be fighting more than twice a year.

Ortiz’s promoter, Oscar De La Hoya, agrees, which is why his first bout of 2022 is taking place in March, giving Golden Boy Promotions nine months to make as many follow-up bouts as they can for him. Ortiz (18-0, 18 KOs) takes on unbeaten English southpaw Michael McKinson at the Galen Center on USC’s campus in Los Angeles this Saturday. Ortiz-McKinson headlines a Golden Boy Promotions card that will be streamed live on DAZN (6:00 p.m. PT/9:00 p.m. ET).

“The strategy is to get him at least three fights this year,” De La Hoya said during the kick-off press conference in late February. “We’re already in discussion with arenas in Texas and talking to the management of potential opponents.

“No disrespect to McKinson, because he’s no walk in the park. He’s a complicated boxer, he’s almost like a fencer. But with Vergil’s pressure and determination and power, it’s only a matter of time before he overwhelms his opponents.

“So, we’re looking ahead. Vergil told Jerry Jones that he would one day headline a mega event at the AT&T Stadium after his second pro bout there. We feel like he’s getting closer to that goal, so we just have to keep him busy and get him the best fights possible.”

The more fights a year, the better, says Ortiz.

“I hope I can at least fight three times,” he said. “I’m sharper when I’m active. I’d love to fight four times this year.” 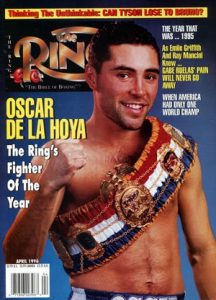 De La Hoya knows something about that kind of activity at the world-class level. He fought five times in 1994, the year he won his first world title. He fought four times in 1995, the year he earned The Ring’s Fighter of the Year award for besting the likes of John John Molina, Rafael Ruelas, Genaro Hernandez and Jesse James Leija. In 1997, as the biggest attraction in the sport next to the downward spiraling Mike Tyson, De La Hoya fought five times – including a welterweight title-winning decision over the legendary Pernell Whitaker.

“Boxing becomes fun when you stay active and you basically stay in the gym all year,” De La Hoya said. “You’re training to hone your skills at that point. You’re not just working out to lose weight. You’re already on weight. You’ve already got your timing and confidence, so you can just focus on strategy.

“If Vergil gets busy like that he’ll be very hard to beat. Every fight he’s in – whether it goes one round or 10 rounds – has a purpose. Each fight is giving him experience and teaching him for the future, and Vergil is like a sponge when it comes to boxing. He’s going to be ready for that mega fight when the time comes.”

Errol Spence Jr., The Ring’s No. 2-rated welterweight and No. 5 in the pound-for-pound rankings, hails from DeSoto, Texas, a city in Dallas County, just like Ortiz’s hometown of Grand Prairie.

Spence makes sense to Ortiz, too. 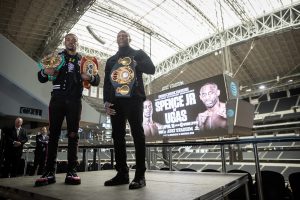 “He’s the fighter I get compared to the most,” said the 23-year-old Texan. “I’ve heard a lot of fans say he’s a southpaw version of me. We came out of the same gym (as amateurs in Texas), we had the same trainer for a time, and that would be a really entertaining fight to make.”

Spence faces Yordenis Ugas, The Ring’s No. 3-rated welterweight, in a three-belt unification bout at AT&T Stadium on April 16. Whatever turnout Spence-Ugas produces, De La Hoya is confident that Spence-Ortiz would do a lot better.

In the meantime, Golden Boy has one job concerning Ortiz – get him more fights.

“It’s going to be a little complicated,” De La Hoya admitted. “Nobody’s going to want to fight him because they know he’s dangerous, there’s a good possibility that they’re going to get knocked out, but the longer the top guys wait, the better he gets.”