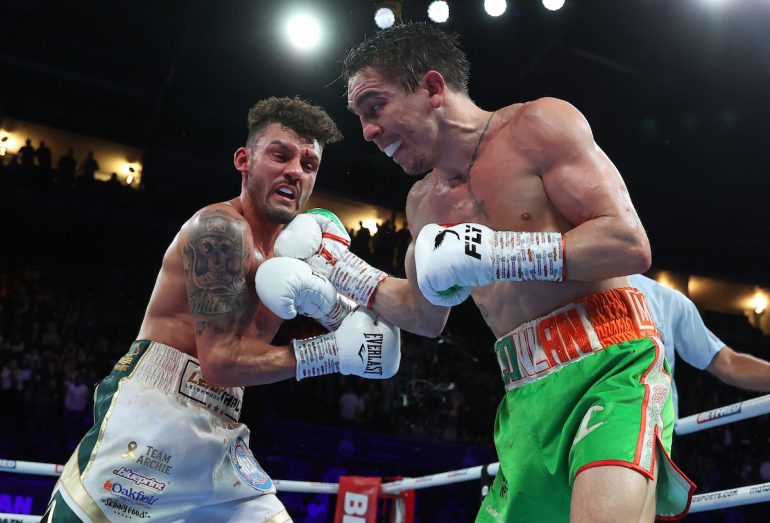 After suffering the first loss of his career, Michael Conlan discusses the heartbreak he’s feeling with Tris Dixon

How are you today?

MC: He just caught me. I was extremely fatigued, but I was taking his shots all night and it wasn’t like he had extreme, mad punch power. I was tired, I made a defensive move and I wasn’t even looking where the punches were coming from, so it was a punch I didn’t see which hit me in the temple and obviously it turned my lights out. He can whack. Obviously, if I’d seen the punch and anticipated it, it wouldn’t have been a problem but it was one I didn’t see that did the damage and it switched me off. I think there was a lot more made of it than it was. I was out, then I was on the ground and I was awake. They made it out like I was dead but I was on the ground and I was awake.

How was fight week, did it go as you hoped?

MC: It did. No complaints. Everything in the fight went really well and the whole of training camp we trained to fight orthodox and I knew within seconds that I was going to have to do it southpaw so we changed the whole gameplan in the first few seconds and boxed as a southpaw.

You still got off to a dream start, with that first round knockdown?

MC: [Laughs] If it had happened 30 seconds before, the fight would have been over. That would have been it. I would have been champion now and there are little things that I kick myself for that make it all harder because it shows how close we actually were to being champion. I was inches away. And 95 seconds at the same time. It was seconds. It was a few little moments where you could have said, ‘That was it, or just hold on here…’ ‘The 11th round as well, I slipped. That wasn’t a knockdown. I slipped, my cutman kept throwing water on me coming back and the ground was soaking and when that happened in the 11th my foot slipped back. It slipped across the ground and I said it was a slip, and you see Adam [Booth] going crazy, and you could hear [Tony] Bellew going crazy. It’s just all little things. I suppose everything happens for a reason and I always say it, and I believe it as well. I can’t sit here and say that shouldn’t have happened. I’ll take the loss on the chin. I was beaten. That’s all it is and he pulled out the wonder shot, he pulled out the Hail Mary in the last round and fair play to him.

He said he enjoyed it in there, did you enjoy the fight?

MC: It was a great fight. They’re not the kind of fights you want to be in every week but it was a great fight. I just thought that I was winning. People are saying to me now about it being Fight of the Year and things like this, I just thought I was winning. I didn’t think anything of it. Looking back, I thought it was a case of me going in, doing the job and winning the fight. I just got clipped in the end. Obviously there was loads of back and forth but it wasn’t registering like that, I was just thinking, ‘won that round, won that round… lost that round, won that round’.

Going out for the last, what was the strategy? Do what you were doing?

MC: No, because of the knockdown Russ [Abner] the cutman says, ‘You need to win this round.’ And that put a thing in my head and I went out on the front foot instead of just boxing. I should have done what I did in Round 9 I think it was and just boxed and he couldn’t touch me and I think, ‘Why didn’t I do that?’ So these are all the little things that are playing in my head. It will take me a very long time to get over this. I don’t care. I really don’t. I’m absolutely heartbroken.

Does that make it more important to, when you’re healed and clear, to get back out?

MC: I think it’ll be summer time I’ll be out again. Whether it’s July or August, it will be one of those. I’ll go on holiday because my body and brain need a rest. That type of fight can take something from you. It was one of those fights. I woke up this morning, I was in hospital last night and I was knocked out. That means you’re concussed. You’ve got a concussion. I think Leigh Wood was put down and his head was rocked round the place so I would also say he’s concussed. If you look at the fight, he took a lot more damage than I did throughout. Although he had the finishing shot, the damage he took through those 12 rounds was a lot and he’ll have lost something from that fight, so it’s about just recover and get back to normality and let my body rest, because that was a big fight. That was big. It’s not the type of fight you want to have every day of the week or every week. It’s one of those once-in-a-career fights, you don’t need many of them.

You want the rematch, Leigh feels he had to concede a lot to get you to Nottingham… He holds more of the cards this time around.

MC: Yes, definitely. I’ll go back to Nottingham. I’ll go to the City Ground, and in terms of what’s being paid, I’m more the B-side than I was that time, so he’ll have more say in terms of what he’s being paid. But I think that fight is even bigger now than it was before, so I think there’s a lot more money on the table for that fight and I think a lot of people would be interested in that fight, Top Rank included. Whatever way it’s going to go, I would love that fight to happen next. Whether or not it does, is the question. Does Leigh Wood want to fight me again after that? Because he was losing that fight, right up to the last bell until he pulled out that shot that changed the day. He had that equaliser. Would he risk that against me now he’s got the win over me? I don’t think he will. I think he’ll want to aim for a bigger fight for himself, a unification, if he can get Leo Santa Cruz into the ring, or a unification then I understand it. But if not, I think the only viable option is me and I think it’s probably the biggest option for him financially, too. If I have to take a lesser part of the pot, so be it. I just want to face him again. I think I proved I have the beatings of him. I just made some little mistakes throughout those 12 rounds and it cost me dearly in the end.

Have you watched the whole thing back?

MC: I watched highlights last night. I was so in control. It was good back and forth [action] but I was winning most rounds. I had it like 7-2 after nine rounds and I had it wider than the judges had it.

You may feel like you’ve lost some career momentum, but you’ve both been elevated by that fight in terms of popularity and career-standings… Do you get any consolation from that?

MC: I’ve had people say your value has risen more than it was, people had never seen a fight like that, people didn’t think you had that in you… It’s nice people saying that and you could sit here and take things from it but, at the same time, I lost, so for me, none of that matters. The only thing that matters is I lost. I hate losing. It’s my first loss since the Olympic Games and I’m properly heartbroken. It’s really hurting. I woke up this morning and thought I was going to cry. I thought it was a dream. It’s really hard to take.