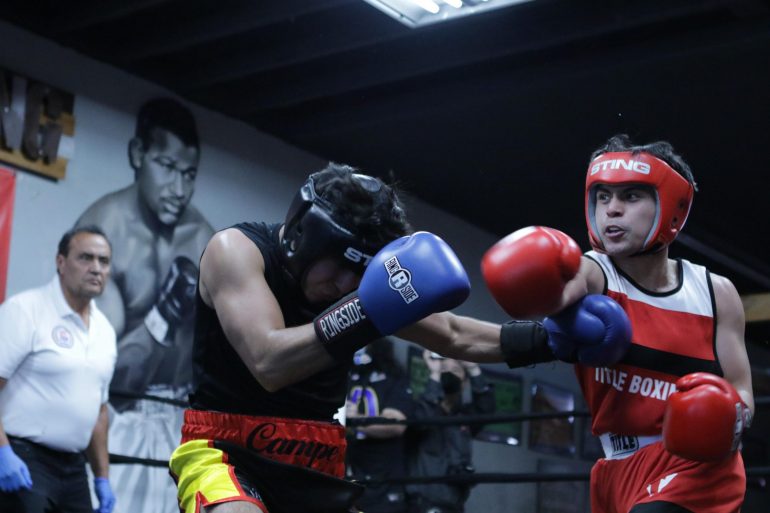 Manny Pacquiao may have retired from the ring, but his namesake is working to establish his own legacy in the sport.

Emmanuel Pacquiao Jr. moved his amateur record to 1-0 on Saturday with a decision win over Andres Rosales at the House of Boxing gym in San Diego, Calif. The bout was his first sanctioned amateur bout; Pacquiao Jr. had previously competed in unsanctioned bouts in Manila.

Pacquiao, 21, of General Santos City, Philippines used a stiff jab and a sneaky overhand right to consistently beat his opponent to the punch in front of a packed crowd. There were no knockdowns or scores read, only the announcement that Pacquiao in the red corner had emerged victorious.

Marvin Somodio, who has been an assistant to Pacquiao Jr.’s eight division champion father for a decade, liked what he saw from the young man known as “Jimuel.”

“This is only his first amateur fight but he showed me that he has heart. He’ll get better and stronger,” said Somodio of Pacquiao Jr., who is the eldest of five children born to Pacquiao Sr. and wife Jinkee Pacquiao.

Somodio says Pacquiao Jr. will remain in Los Angeles, where he’ll continue to train him at the Wild Card Boxing Club, the same gym where his father first arrived at in 2001 en route to becoming an all-time great. He says they are actively looking for a date for his second amateur bout.

Aside from boxing, Pacquiao Jr. has also found work as an actor and model, and has a Youtube vlog with over 560,000 subscribers. Pacquiao Sr. had initially been reluctant to offer his son his blessing to box, but was eventually worn down by his son’s insistence on trying the sport out for himself.

Manny Pacquiao reportedly had an amateur record of 60–4, beginning with his first fight at age 12 before turning pro at age 16.

Pacquiao Jr. is far from the first son of a boxing great to pick up the sport. Julio Cesar Chavez, Leon Spinks, Chris Eubank, Aaron Pryor, Hector Camacho, Joe Frazier, and Wilfredo Vazquez are among the many boxing champions whose sons have had boxing careers of their own.