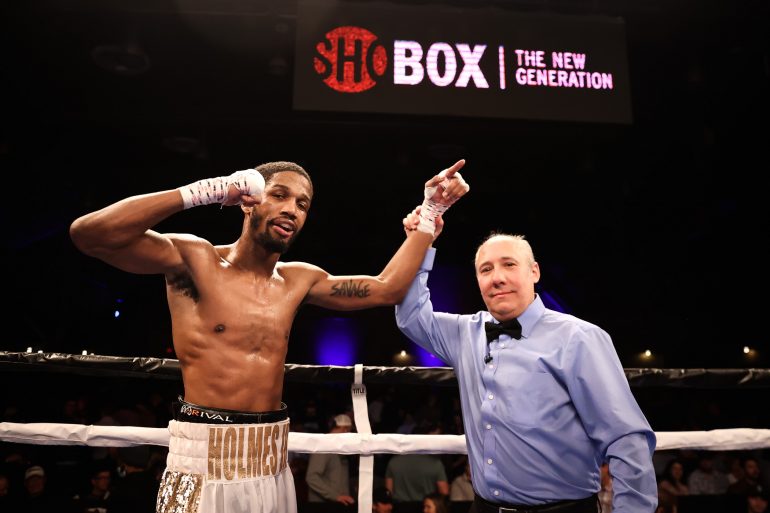 Maybe middleweight prospect Ardreal Holmes created a new training method. Take over two years off to preserve your body, while continuing to train, and return to the ring after a 27-month layoff looking the sharpest you ever have in your career.

That’s what the 26-year-old Holmes did Friday night, winning an easy unanimous 10-round decision over Vernon Brown in the main event on ShoBox: The New Generation from Deadwood Mountain Grand Hotel in Deadwood, South Dakota.

In the co-feature, Dominican lightweight southpaw Edwin De Los Santos delivered a frightening knockout of Luis Acosta in the second round of their scheduled eight-rounder.

Referee Mark Nelson stopped the fight immediately at the :48 mark.

It was the first defeat for Acosta (12-1, 11 KOs). De Los Santos (14-1, 13 KOs) was the first fighter Acosta encountered with a winning record. De Los Santos was 63 days off his first pro loss. De Los worked well off the jab, and started well, forcing Acosta to touch the canvas after connecting with a right hook in the opening round.

Acosta showed some glimmers, but not much, like the right he caught De Los Santos with around :18 left in the first. De Los Santos replied with a straight left, setting the stage for the second-round knockout.

In the opener, welterweight prospect Giovanni Marquez (1-0) added some history to his early pro resume by becoming the seventh fighter in the vaunted history of ShoBox to make his professional debut on the series, extending the streak to 7-0 in those bouts as Marquez scored a four-round unanimous decision over the tough Nelson Morales.

“I felt great,” Marquez said. “I hurt my left hand in the second round on a jab. I think I would have been able to stop him if I hadn’t hurt my hand.”

“All the attention, it’s really not normal for a 21-year-old,” said Raul Marquez, who rejoined the SHOWTIME broadcast team of Hall of Famer Barry Tompkins and analyst Brian Campbell before the main event. “I’m really proud of my son. I’m very satisfied.”

Added Giovanni: “It was a great experience. He was a tough durable guy. But I feel like I handled everything, the cameras, all the attention pretty well. I started a little slow but after the first round I settled down and fought my fight. I felt fine without the headgear. We kept bumping heads, but he never hurt me. There was a lot of pressure on me, and I was a little nervous in the lead up to the fight, but once I got into the fight, I relaxed and I felt comfortable. Overall, it was a great experience.”

Following a competitive first round, the 21-year-old Marquez settled in and dominated the second round, his confidence surging with every second that passed against the Dominican-born Morales.

“I think I did OK,” said the 30-year-old Morales (2-1) now living in Scranton, Pa. “My strategy was to go in and box. He cut the ring off and applied good pressure. I can’t say too much because it wasn’t the best of me. He was OK. I’ll be back.”