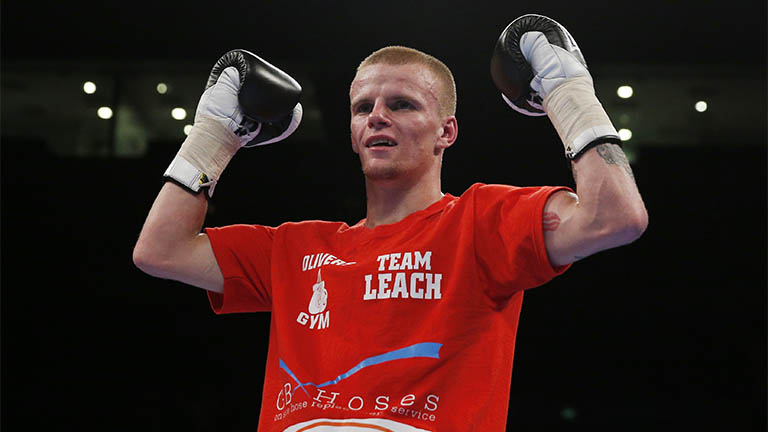 The well-supported Leach took the opener with smart movement and sharp shots and he did well in the second, too. Bourke was applying the pressure but he was often tagged by Leach’s jab, but the London man did land a good left hand towards the end of Round 3. There were spells of good action in the fourth as Bourke’s face started to redden but Leach’s defensive work and movement off the backfoot was often negating Bourke’s attacks.

Leach, who is trained by Nigel Travis and who had Jamie Moore and veteran cutsman Kerry Kayes with him, soaked up a left hand in the sixth but his chin didn’t falter and he was well up by the half way stage.

Martin Bowers, in Bourke’s corner, thought Leach might slow up as the fight wore on but Bourke bled from the nose in the seventh and there was swelling by his right eye.

“Do not switch off,” said Travis to Leach after seven, reckoning his man was 4-2 up (presumably with one even). Both had their moments in a tough eighth, Bourke landing another big left but Leach replying with shots of his own that landed to the body and head.

Leach’s right hand was working well in the 10th as Bourke’s left eye started to swell although the Salford man wasn’t without facial damage of his own (bruised under his right eye) but at the end of the 11th and 12th sessions Bourke’s face was an absolute mess. Leach had controlled the pace, the distance and the fight. Bourke was courageous and defiant to the end.