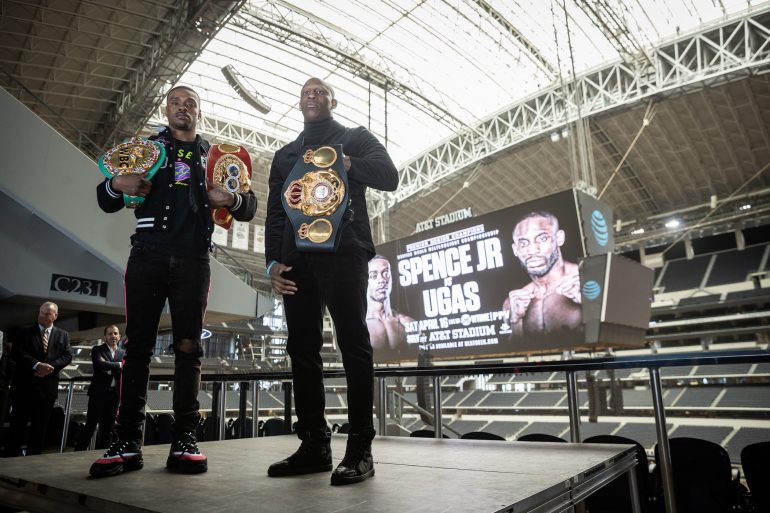 In a press conference to discuss their welterweight title unification clash that headlines a Showtime PPV on Saturday, April 16 from AT&T Stadium in Arlington, Texas, IBF/ WBC titlist Errol “The Truth” Spence Jr. and his WBA counterpart Yordenis Ugas faced off for the first time Wednesday.

Fresh off of an upset victory over legendary eight-division world champion Manny Pacquiao, Ugas will seek another upset victory as he hopes to continue his remarkable run through the division that has seen him win 12 of his last 13 fights since 2016. 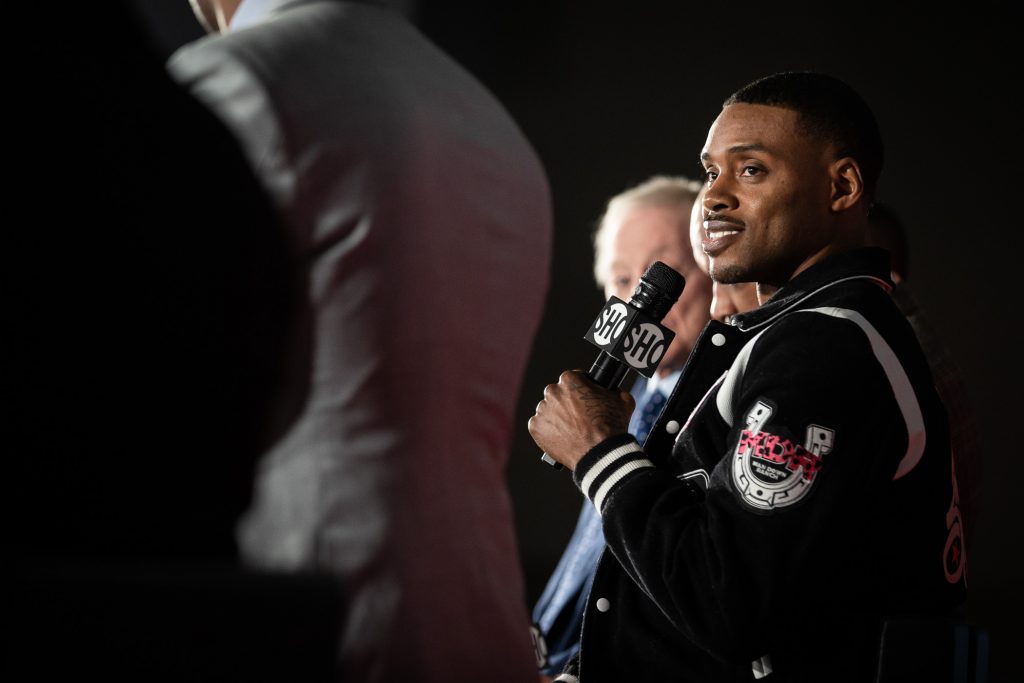 Spence Jr.: “It feels good to be back”

“I can guarantee fireworks on April 16. Ugas is going to give it his all, just like I will,” said Spence Jr. “I’m going to put on another great performance in front of my hometown crowd. It’s ‘Man Down’ and it’s ‘Strap Season’. I’m the guy everyone is talking about. The motivation I get from my family and friends allows me to push through everything I’ve gone through.

“I want to thank Jerry Jones and the Cowboys for bringing me back and realizing my skills and my potential. We’re going to sell this stadium out and make this a great night. I’m going to put on a great show in front of my fans, my family and the whole Cowboys organization.

“I also have to thank Ugas for agreeing to take this fight with me. He’s a tough competitor who comes to fight. I thought he beat Shawn Porter in 2019 and then he beat Pacquiao with an arm injury. He’s a great warrior, but I believe that it’s my time to show the world that I’m here to win another belt. At the end of the day, I want to be the undisputed welterweight champion of the world. This is another step toward that goal. I’ve been the shot caller. I’m the big fish at 147.”

“I feel very sharp right now. My last couple of fights I was really only able to train for about two months. But I’ve been in the gym for the last six months getting ready for this.

“This is going to be a great fight. Ugas always comes to compete. With all respect to Pacquiao, I’m a way different fighter than Pacquiao and at this point I’m a better fighter. Ugas is a real warrior, but I’m hungry too. I’m not letting this opportunity pass by me.

“I’ve been feeling strong. My nutritionist that I added for this camp has been the missing ingredient. I was struggling to make weight and I think that’s the reason that I haven’t gotten a stoppage in my last few fights. This is the first camp in a while that I haven’t put the sauna suit on. It’s been a breath of fresh air. I’m really having fun in this training camp. 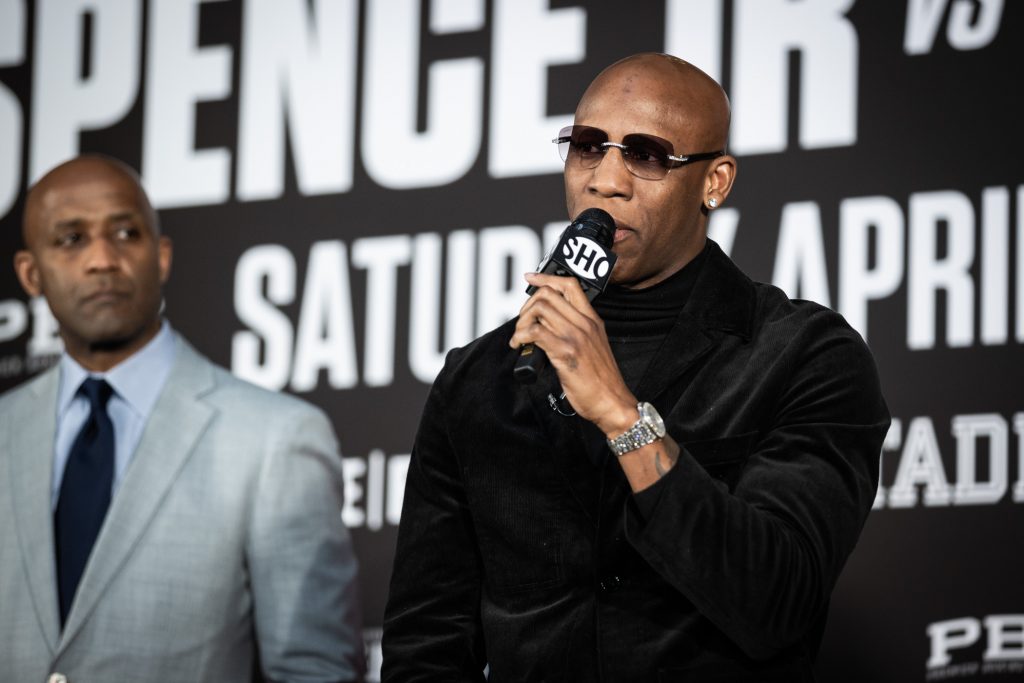 “I’m a warrior. I’m someone who is committed to his family, to his community, to his team. I’m going to give the fans more than 100 percent of what I can give and I can promise you it’s going to be something you don’t want to miss.

“I not only accepted this fight, I pushed for this fight. Because I want to fight the best. Here we are, two of the best welterweights in the world. I want the biggest challenges. I’m here and I’m ready to prove that everything I’ve done so far wasn’t a fluke at all.

“Whoever wins this fight is going to be the king of this division and the one that calls the shots from now on.

“I’ve been waiting for the best Spence to reappear for two years now. I was well aware that he had to overcome a terrible accident. After that, the surgery on his eye was nothing. I knew he could overcome that. 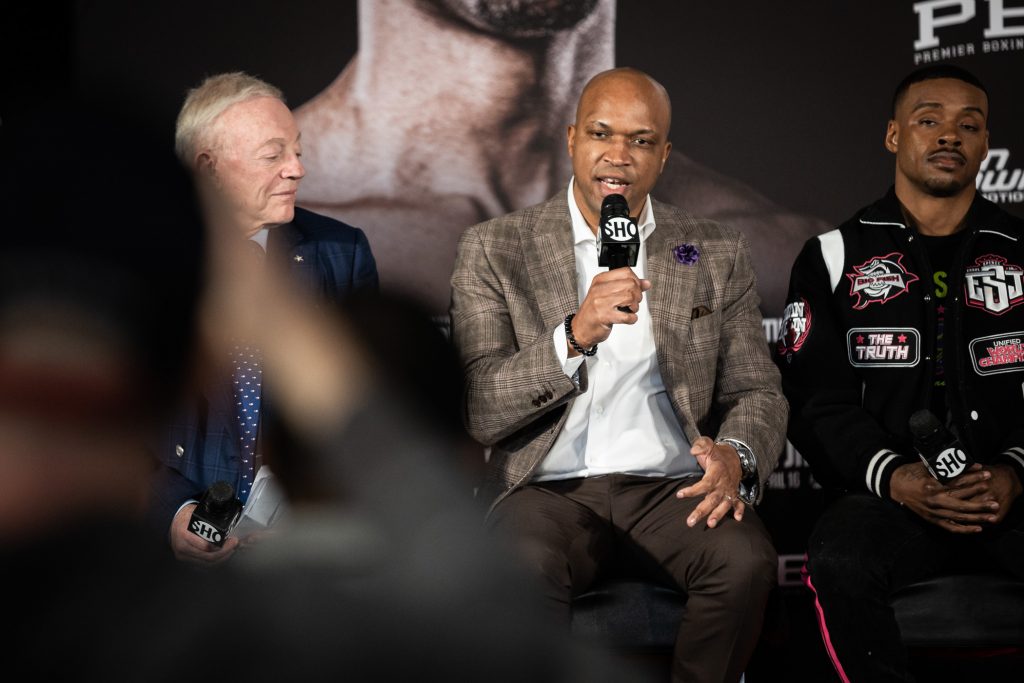 “Fighters get better when they fight great opponents. You’re going to see the best of Errol Spence Jr. on April 16, because Ugas is going to bring it out of him.

“Errol is looking phenomenal in the gym and he’s only getting better. We’re really looking forward to the challenge that Ugas is going to present.

“Yordenis Ugas deserves this fight. He’s proven it from his journey defecting to the U.S., to him coming back to the sport as a late replacement opponent and then fighting all the way back to become champion. The night he fought Pacquiao, I told Ugas that the stage was set for him and that he should go make the best of it. That’s exactly what he did and now we’re here.” 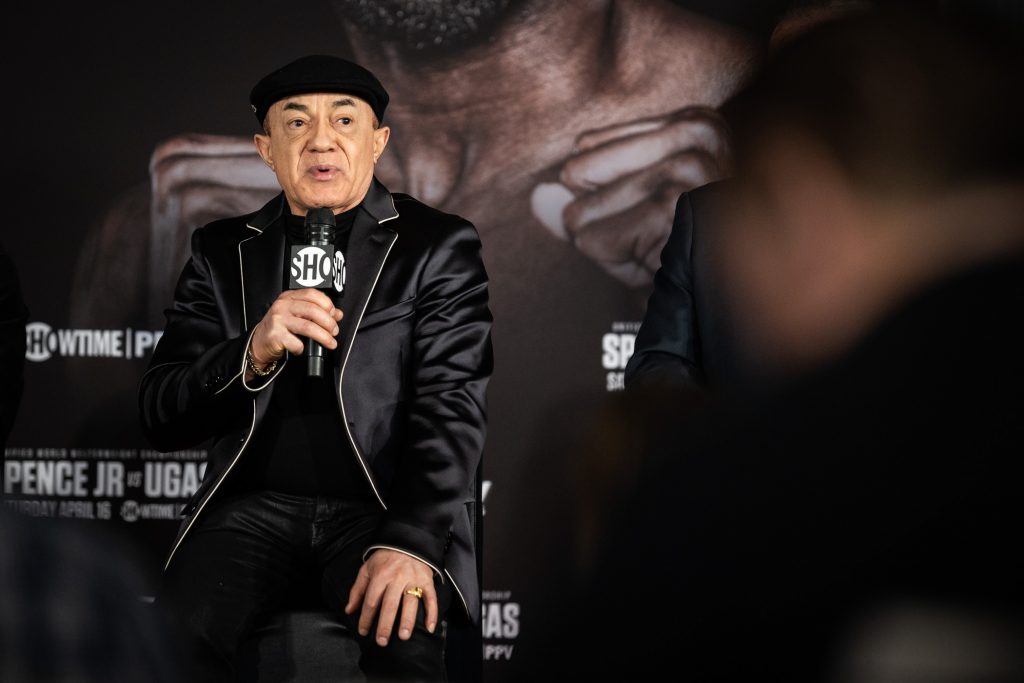 “It’s been a long time, over six years, of hard work with Yordenis Ugas. Finally, we get what we’ve been working for. This is the top fight in the welterweight division.

We respect Errol Spence for his achievements, but remember that Yordenis Ugas always comes in as the underdog. And I love to be the underdog as well.

“On April 16, we will make a statement because Ugas deserves to get what he’s been working for. This will be a historic night, and history will be made by Yordenis Ugas.”

A press release by Showtime/TGB/PBC was used in this article.