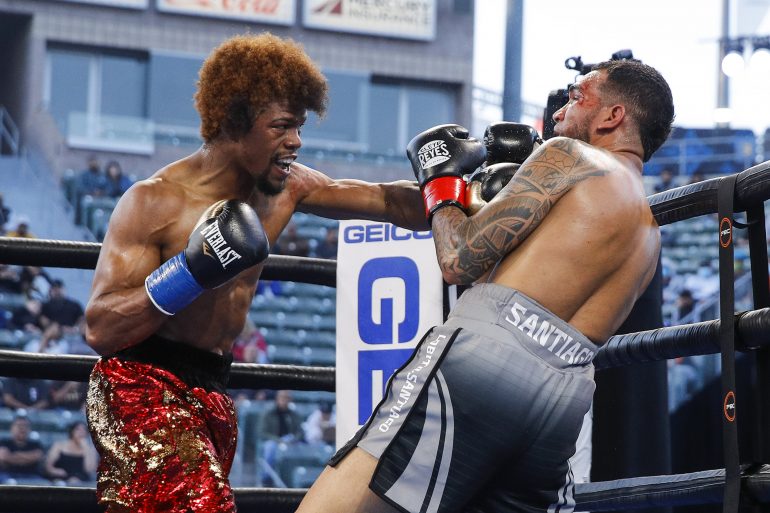 Gary Antuanne Russell was too much for Jovanie Santiago. Photo by Esther Lin / SHOWTIME
21
Feb
by Anson Wainwright

It will be the first time Russell has fought since an impressive beatdown of Jovannie Santiago (RTD 6) last May. However, there are mitigating circumstances for his extended absence from the ring.

“I lost my brother, he passed away, at the beginning of 2021, my father just got one of his legs amputated,” Russell (14-0, 14 knockouts) told The Ring. “There’s been a stressful chain of events. Now that I’m getting something that’s productively keeping my mind occupied – it’s a help.

“I needed time away but I’ve got to keep in mind, I still need to keep active, things still need to get done. Me being a couch-potato or bawling my eyes out, things of that nature isn’t going to get things done.”

“I hear people say the reason he lost is because he did everything with one hand, just because a person is a one-handed fighter doesn’t determine if a person loses or not,” he said. “If you’re outpointing the person, making a person miss, landing the cleaner shots, then yes, you deserve to win.

“My brother displayed skills, he hurt his shoulder but he did what he had to do to come out victorious. A person, who’s going up against the champion, you’ve really got beat the champion and I don’t think the guy did that at all.”

The 25-year-old southpaw is now focused on the task in hand and ready to take a huge step up in opposition, though is taking everything in his stride.

“Honestly, he’s another opponent that’s in the way of my vision,” he said. “I won’t take away his credentials and the things he’s done in his career but I really don’t put him on a pedestal. I give him respect because any fighter who prepares for no one but me for eight weeks could be dangerous.”

Russell, who was the subject of a New Faces feature in the October 2020 issue of The Ring, intends to make a statement to the junior welterweight division.

“That’s the plan, I just have to execute come fight time,” he said. “I will not give full disclosure about what my game plan is, what my tactics are. Viktor Postol is a good fighter, he’s no slouch, I will have to make adjustments just for him.

“My goal is to accomplish a ​victory; it would line me up for a title match.”

The confidence oozes out of Russell, who feels he has everything to go on and become a big name in boxing.

“Be prepared for a great show,” he said. “I tell people all the time I’m a superstar, when I come there and I put on a performance you will see I have superstar written over me.

Postol learned his craft in Europe before breaking through with a stoppage of Selcuk Aydin (KO 11) in the U.S. on May 2014. The tall Ukrainian was highly impressive in systematically dismantling Lucas Matthysse (KO 10) to win the WBC title, but he lost a unification matchup against pound-for-pound star Terence Crawford (UD 12).

He dropped a decision to Josh Taylor (UD 12) but repositioned himself with two wins to earn a shot at then WBC/WBO ruler Jose Ramirez. Despite giving the American all he could handle, he lost a 12-round majority decision. The 38-year-old sports a record of 31-3, 12 KOs.