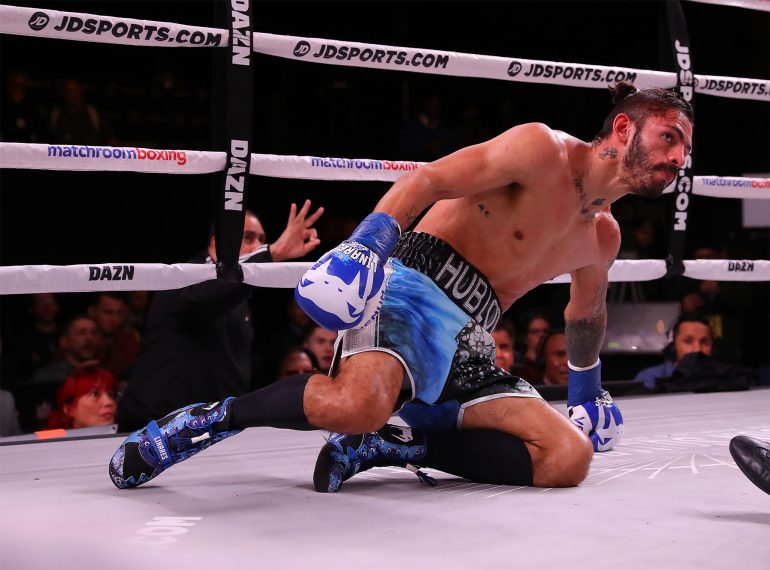 Zaur Abduallev notched the biggest win of his pro career thus far, dropping Jorge Linares twice before winning by knockout in round 12 on Saturday night at the RCC Boxing Academy in his hometown of Ekaterinburg, Russia.

With the victory, Abduallev improves to 15-1, with nine knockouts.

Both fighters were squaring off in a world title elimination bout, even though each suffered a recent defeat to WBC lightweight titleholder Devin Haney. Linares lost by unanimous decision to Haney in his previous fight on May 29. Abdullaev faced Haney in September 2019, losing by knockout after round four in a fight where he suffered a broken orbital bone.

Both mostly fought in the center of the ring during the first half of the fight. Linares was the more-effective fighter as both stayed in the pocket. As the bout progressed, Abdullaev was committed to work the body of Linares. As Abduallev initiated exchanges, Linares countered with either hooks or uppercuts to the head.

Sensing he was down on the scorecards, Abduallev, who is managed by Egis Klimas, was the aggressor from round eight. He began walking Linares down, forcing him to fight off his back foot or against the ropes. A left hook to the head stunned Linares later that round.

Linares’s punch output began to drop, but he continued to stay in front of Abdullaev. As the fight continued during the championship rounds, the veteran’s face had taken a toll from the amount of punches Abdullaev connected.

Linares, who is originally from Venezuela and now lives and trains in Las Vegas, Nevada, drops to 47-7, 29 KOs. Entering the Abdullaev fight, he was ranked No. 8 by The Ring at 135 pounds.

In the co-feature, fringe junior lightweight contender Angel Rodriguez defeated Mark Urvanov of Pervouralsk, Russia by split-decision. One judge scored the bout 116-112 for Urvanov (20-3-1, 10 KOs), while the other two judges had Rodriguez winning by scores of 115-113 and 116-112.

Rodriguez, who is originally from Venezuela and now resides in Barranquilla, Colombia, improves to 20-1, 10 KOs.

Francisco A. Salazar has written for The Ring since October 2013 and has covered boxing in Southern California and abroad since 2000. Francisco also covers boxing for the Ventura County (California) Star newspaper. He can be reached by email at [email protected] or on Twitter @FSalazarBoxing