It’s very rare when everything you work on and plan comes almost exactly how you envision it. That’s what Jamaine Ortiz thought Friday after dispensing of Nahir Albright on Showtime’s ShoBox: The New Generation from the Caribe Royale Resort in Orlando, Fla.

“That’s the goal, to look smart and look more mature in the ring,” said Ortiz, who accomplished both. “The attitude is the same attitude as every other fight and that is to be the best version of myself and be world champion. That’s what I expect from myself. But I’m calm, cool, collected every single time.

“There’s nothing different. It’s another day at the office. That’s how I take it.”

It wasn’t such a surprise that Ortiz won. It was the way he won. If you saw one round, you saw them all.

“I think was my chance to so maturity in the ring, be more patient and being more collected and being able to do when I want to do it,” Ortiz said. “I showed I can box. With this fight, I was able to show a little diversity and I can take this to a boxing match. I would say this would be my best victory (to date).”

Ortiz said he liked his movement. He wants to bottle the patience he showed against Albright moving forward. He’s looking at two or three more fights this year, with the idea of returning to the ring in June.

Marquis Taylor gets robbed in a split-draw against Paul Kroll 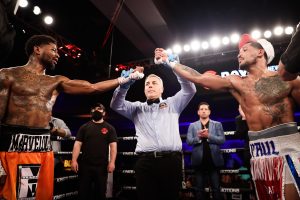 Marquis Taylor doesn’t have a lot of power, though he sure made Paul Kroll pay in their eight-round junior middleweight co-feature. Taylor, however, received a slap across the face with a split-draw decision against Kroll.

Judge Joe Ware gave every round to Taylor, scoring it an 80-72 shutout. Somehow, judge Tito Wilgo scored it 77-75 for Kroll, and judge Alex Levin topped it off with a 76-76 rendering.

“I know, I know I got (screwed), I just have to keep going, I can’t let this discourage me,” Taylor said. “That was my first time fighting on national TV. It sucks, it sucks so bad. I worked so hard. I felt after the first round, it was over. I knew it. He knew it. His coaches knew it. Kroll knows he lost that fight.

“The fighter in me wants to fight him again. But I felt I won by such a big margin, why should I have to give him a rematch? I felt so bad I think an investigation should be done. I won that fight tonight. It’s very mentally discouraging.”

Kroll, 26, was supposed to be the “A-side.” It didn’t look like it. Taylor used his reach to counter everything Kroll tried, especially when he swung wildly, which he did often. In the four, Taylor jarred Kroll, and dominated Kroll in the fifth and sixth rounds, when a left hook sent Kroll reeling into the ropes. Showtime’s unofficial scorer and Hall of Famer Steve Farhood scored it 79-73, giving Taylor seven of eight rounds.

“I got (Kroll) with big shots and I can’t think of a time where he dominated me,” Taylor said. “I don’t know, I don’t know.”

The world knows. It was a terrible decision.