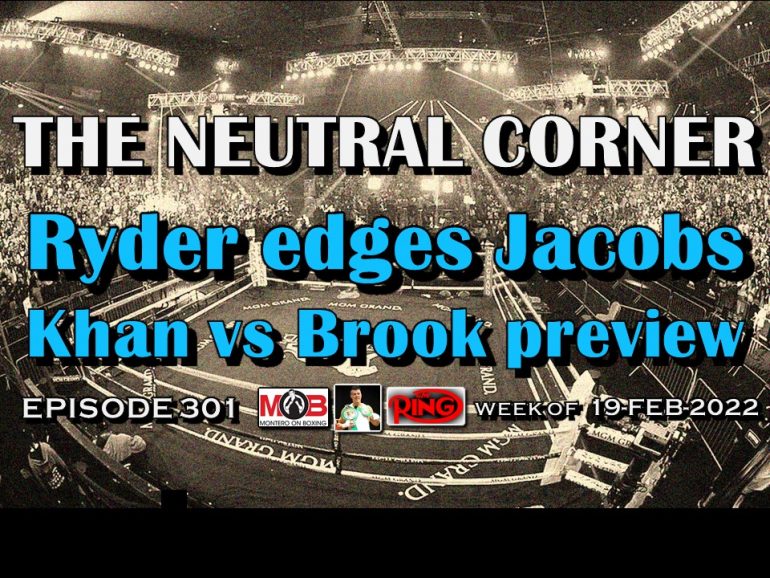 On episode 301 of The Neutral Corner boxing podcast, host Michael Montero briefly gave his thoughts on Super Bowl LVI. The Los Angeles Rams defeated the Cincinnati Bengals 23-20 at SoFi Stadium in nearby Inglewood, CA. The franchise, which started in LA, moved to St Louis for 20 years, then returned to LA in 2016, and has now won two Super Bowls.

In boxing news, young lightweight contender Ryan Garcia announced he will no longer be training with Eddy Reynoso, and will work with Joe Goossen going forward. Middleweight titleholder Jermall Charlo was arrested in his Texas. And PBC announced that junior middleweight Erickson Lubin and Sebastian Fundora will fight April 9 on Showtime.

On Saturday, February 12, John Ryder won a controversial split decision over Daniel Jacobs in London. The super middleweight bout headlined a Matchroom Boxing card that was broadcast on DAZN. After a dominant start, Jacobs appeared to fade in the second half of the fight. Still, many on social media felt the American had done enough to win.

Ryder landed 135 of 448 total punches (30%), compared to 123/651 (19%) for Jacobs. Could Ryder be a potential future opponent for undisputed super middleweight champion Canelo Alvarez? The Mexican is yet to fight in the UK as a pro.

“The Daniel Jacobs fight has been close,” said Brian. “Danny is not Danny anymore.”

“The biggest problem with Ryder is that he is an unbelievably slow starter,” said Nacho. “He allowed Jacobs to clinch way too much in the first half of the fight.”

“Jacobs has made his money, and he’s just a minimalist at this point,” said Thad. “The first six rounds of the Jacobs vs Ryder fight were dreck. I felt Ryder won. Jacobs has had a good career, he’s a credit to boxing.”

“I believe the best option for Terence Crawford is to sign with Mayweather Promotions,” said Mike. “He can be that middle man between Bud and Al Haymon, to help negotiate that big fight with the Spence vs Ugas winner.”

“I think Bivol is a horrible style matchup for Canelo,” said Jack. “He’s a fantastic combination puncher and has fantastic footwork. I’m telling you right here and now that if Canelo fights Dmitry Bivol, he is going to lose.”