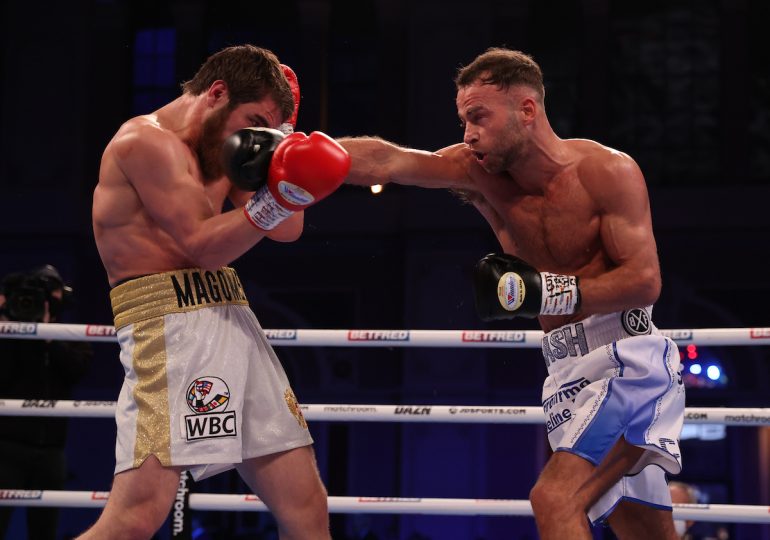 Middleweight Felix Cash was floored twice and had a point deducted but still came through a hard fight with capable Russian Magomed Madiev on Saturday.

Cash won their 10-rounder by margins of 95-92 (twice) and 94-93 and he came through several sticky moments, notably in Round 2 when he was floored by a left hook and in the 10th when he was put over by a right hand.

It was an exciting fight. Cash seemed to recover from the second-round dramatics to get the measure of Madiev, banking rounds as Madiev seemed to run out of ideas but in Round 10 the Russian nearly managed to turn the tables and keep them turned.

Cash, who is rated No. 10 by The Ring at 160 pounds, was nailed by a couple of left hooks and a right hand sent him lurching into the ropes.

The referee, Mark Lyson, deemed that the strands had prevented him from touching down, so he was knocked down for a second time in the fight.

Cash looked shocked and was desperately hanging on. Madiev steamed in to finish and Cash tried to grapple. A cut over his left eye was pouring blood into Cash’s left eye and then a point was taken from Cash for excessive holding. It was a wild affair and both boxers let the leather fly in a desperate bid to earn the decision but Cash had banked enough rounds to earn the decision.

Heavyweight Johnny Fisher, the world’s most popular novice boxer (he sold around 2,000 tickets for this show at the Alexandra Palace), moved to 5-0 with a six-round points win over Spaniard Gabriel Enguema.

Within 90 seconds of the first bell, Fisher was cut and bleeding heavily by his left eye following a clash of heads and he would have learned plenty going the distance for the first time.

Fisher was firing in right hands bombs trying to get it finished early and Enguema, for his part, was game and kept coming.

Junior featherweight Ellie Scotney, 4-0, won a 10-round tear up against Argentina’s Jorgelina Guanini (96-94 twice and 95-94) and Austin ‘Ammo’ Williams, 10-0, stopped Javier Maciel in the sixth of a scheduled eight. Maciel was down in Round 1and in real trouble and he soaked up a steady beating before being dropped twice and stopped in six.