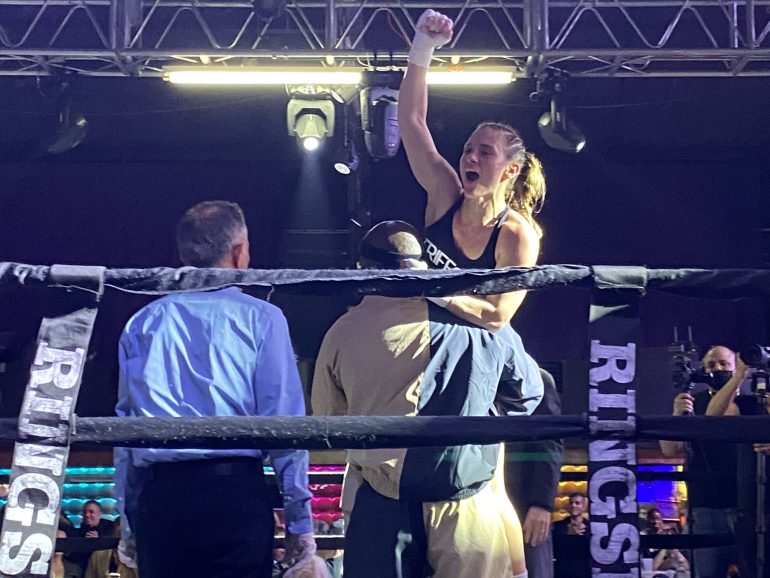 NEW YORK — Chiara Dituri lived up to her “Speedy” nickname, outfighting a tough Michelle Cook on Friday night to win a majority decision at the Amazura Concert Hall in the Jamaica section of Queens, N.Y.

Dituri (5-0, 2 knockouts) stunned Cook (1-3-2) several times in the bout, primarily with the right hand, but couldn’t stop Cook from continuing to press forward. Two judges scored the six-round junior lightweight bout 59-55 in favor of the 27-year-old Brooklyn native Dituri, while the third had the bout even at 57-57.

Dituri, who is trained by Don Saxby out of Gleason’s Gym, has already fought five times since turning pro last March, while Cook has fought just twice since 2014.

Raymond Cuadrado, the night’s biggest undercard ticket seller, moved his pro record to 3-0 (1 KO) with a unanimous decision victory over Saquan Felton (2-4). All three judges scored the fight 39-33 in favor of Cuadrado, 25, of nearby Ridgewood.

Cuadrado looked on his way to an early stoppage when he scored two knockdowns in the opening round, but the overanxious Cuadrado lost a point for hitting Felton when he was down. Cuadrado scored another knockdown in the second with an overhand right, but couldn’t find the punch that could finish the bout. That inability to finish ended up costing Cuadrado, who was cut over his right eye in the fourth round by a headbutt.

”I’m happy with my performance tonight. I had a tough opponent in front of me, I got my punches off first and that’s when he started going down,” said Cuadrado.

Cuadrado says he doesn’t expect the cut to delay his next fight, which is scheduled for March 19, underneath the Edgar Berlanga-Steve Rolls bout which headlines Top Rank’s annual Puerto Rican Day Parade weekend card at The Theater at Madison Square Garden. The New York State Athletic Commission suspended him for a month due to the cut, and the next fight is five weeks away.

Cuadrado, a 5’8” junior lightweight, is trained and co-managed by his father Ray Cuadrado Sr., who is also the President of USA Boxing Metro, which runs amateur boxing in New York City. The Filipino-Puerto Rican prospect had been ranked in the top ten in the country by USA Boxing before turning pro in April of 2021 after approximately 80 amateur bouts.

Cuadrado has other interests outside of the ring, including modeling for The North Face’s most recent fall and winter line. He is also a Twitch streaming affiliate, earning extra money through his account RayTheBoxer to play video games like Apex Legends and Halo.

Jose “Chocolatito” Gonzalez ended a year of inactivity with a unanimous decision over Aaron Echeveste (6-6, 3 KOs) in a six-round featherweight bout. Two of the judges scored the bout 60-54, while the third found a round to score for Echeveste, turning in a 59-55 scorecard.

HIGHLIGHTS: Jose Gonzalez (@chocolatitojg) improved to 16-0-2 (5KOs) with a 6-round unanimous decision over Aaron Echeveste (6-6, 3KOs) last night in Queens. Gonzalez, a cousin of @chocolatitobox, is from Harlem, NY and trains out of @GleasonsGym #boxing pic.twitter.com/LI6mcyIV3x

Gonzalez, a cousin of former pound for pound champion Roman Gonzalez, used his southpaw counterpunching and superior speed, but didn’t have the power of his more famous cousin to finish Echeveste, who had only been stopped once before.

The night opened with Mathew Castro (2-0, 2 KOs) of the Glendale section of Queens stopping the previously unbeaten Joey Aquino (2-1, 2 KOs) of Pahoa, Hawaii in the second round. Castro, a multiple-time N.Y. Metros champion who trains out of Universal Boxing Gym in Ridgewood, was landing at will when a punch opened a cut above Aquino’s left eye. The fight was stopped at the 38 second mark.

Castro, who had about 25 amateur bouts at the Junior Olympic level, expects to be back in the ring in April.