Lazarte-Casimero: brawl in the ring, mayhem on the stands, 10 years later 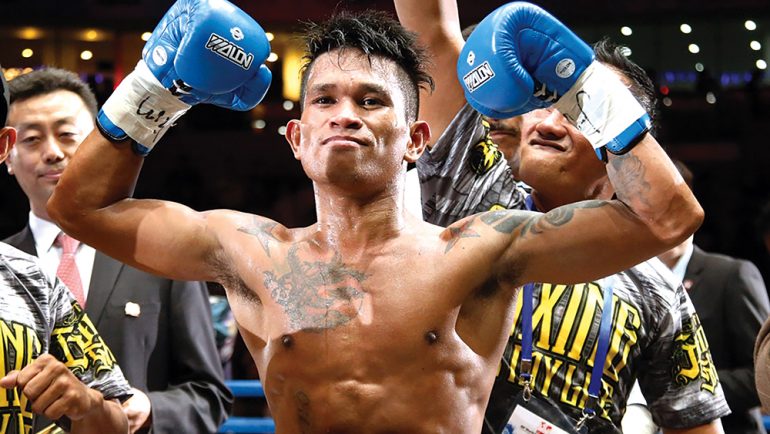 The history of ringside brawls can be divided in two large groups: those that were caught on video, and those which weren’t.

And although I am sure there were plenty of intense bench-clearing donnybrooks back in the days of the bareknuckle boxing and the early gloved era, they will only live on in the memory of those who were there, if they’re still alive.

The Lazarte-Casimero disaster, however, will live on as long as video exists. And during that period of time, it shall reign supreme as one of boxing’s most infamous nights.

It ended with the local hero losing his last chance to grab title as well as his license, and the new titlist fearing for his life. But above all, it lives in infamy as one of the most violent mob attacks in boxing ever caught on tape.

On February 10, 2012, the fight between Argentina’s Luis “Mosquito” Lazarte and John Riel “Four Aces” Casimero ended up in what can only be described as an attempted lynching. A throng of only a few hundred spectators in a small gymnasium of the Club Once Unidos, in the outskirts of the Argentine city of Mar del Plata, came within minutes of causing a tragedy far worse than what it turned out to be.

And it was quite bad to begin with.

Lazarte, born in Mar del Plata to a mother that gave him away at birth only to be retrieved miraculously by his aunt who then adopted him legally, was making one of his last stands at the highest level after building a reputation as one of the dirtiest fighters ever in his home country. Having already tried to win the WBO and WBC versions of a world title below the flyweight division earlier in his career, Lazarte had lifted the IBF junior flyweight belt in 2010 by defeating Colombia’s Carlos Tamara in the same Once Unidos stadium where he would later stage the Casimero fight. He defended it twice there also, first against Nerys Espinoza and then against Ulises Solis, against whom he would lose the belt in a rematch. After beating Espinoza again in an elimination bout, Lazarte (49-10-2, 18 knockouts at the time) set out to regain his belt in a vacant interim title bout against Casimero (15-2-0, 9 KO), after Solis was declared “champion in recess” due to an injury.

Casimero, born in the Philippines and fighting under Manny Pacquiao’s promotional banner, was fresh off two heartbreaking losses, one in an attempt to lift the IBF flyweight title against South Africa’s Moritu Mthalane, and a previous one in which he lost to Mexico’s Ramon Garcia the interim WBO flyweight belt he had lifted against Nicaragua’s Cesar Canchila eight months earlier. All those fights had been in his opponent’s respective backyards, and with a record of 1-2 fighting abroad, Casimero flew to Argentina trying to even out the score. He did. But at a heavy price.

The third protagonist in this tragicomedy was referee Eddie Claudio, who in spite of having been forewarned about both Lazarte’s dirty tactics as well as about the belligerent nature of Lazarte’s followers probably went in expecting little more than a tough, dirty fight in the ring. No forewarning, however, could have prepared him for what transpired outside the ropes.

Which takes us to the final component in this fight, which is none other than the loud mob of mostly burly, surly and presumably inebriated men in the stands. We’re not talking about the fifty or sixty people who had actually showed up to the stadium to purchase their own tickets at the gate. We’re talking about the hundreds that got a free ticket from the local Camioneros (Teamsters) labor union, to which Lazarte belonged thanks to his job as a garbage collector first (1988 to 1997) and later as a street sweeper, a job he still holds today at the age of 50. With banners hanging from the rafters and columns identifying their branches within the organization (from cattle transportation to beverage distribution and beyond) and with loud drum-and-brass bands performing popular melodies to which the crowd added lyrics honoring their fighter, the Camioneros crowd was there with the sole purpose of shepherding their hero to a new world title. Nothing else mattered.

As it is their custom during their rallies and picketing events, Camioneros usually begin their night gathering outdoors to eat (mostly choripán, a simple sausage sandwich) and drink heavily on the union’s dime. The mood was set. 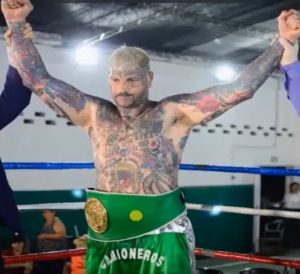 One of them, also a fighter, was part of Casimero’s security detail. Gonzalo “Big Foot” Basile, a 6’5’’ head-to-toe tattooed heavyweight with a spotty record both inside and out of the ring, was there to mediate between his comrades and the visiting team in order to keep things civil. Someone should have known better, though.

At this point it is pretty useless to describe the fight itself. A list of the fouls and infractions committed during its ten rounds should suffice. After a lot of elbowing, headbutting and grabbing from Lazarte for the best part of the early going, Casimero kicked his foe while Lazarte was on the canvas, drawing a point deduction. Lazarte sent Casimero to the canvas in the following round, but was deducted a point in the sixth round for repeated rabbit punching. Casimero returned the favor and lost a point in Round 8 for the same reason. And there were at least two occasions in which Lazarte was seen trying to bite Casimero on his neck or shoulder.

It was only after Lazarte went down twice in the ninth and once again in the 10th, prompting Claudio to halt the bout, that things got completely off the rails.

Against all common sense and in spite of warnings against doing so, Casimero climbed the ropes in a corner and pounded on his chest twice, celebrating his achievement during an emotional moment in his life, since he had lost his brother only days before traveling to Argentina, choosing to fight on through the pain.

The celebration triggered an attack from all angles that couldn’t have been more effective if it had been rehearsed. Several members of vest-wearing Camioneros jumped onto the apron and into the ring to start punching and kicking Casimero and his team, who fell to the ill-advised natural reflex of fighting back for a minute. That’s all it took for chairs, water bottles, cans and other projectiles to start being hurled into the ring. Chaos ensued.

Just as Casimero’s handler Sean Gibbons was being escorted to the dressing room by two police officers after being repeatedly kicked and punched, Casimero himself and his cornermen were forced to hide under the ring, with a dozen angry attackers trying to fish them out. Basile was nowhere to be seen, and he later claimed he ran to shelter his own wife and offspring to safety. TyC Sports blow-by-blow commentator Walter Nelson simply vacated his post and allowed his mic to become a raw live broadcast of what quickly devolved into a WWE scene, complete with top rope jumps, slide-offs below the bottom rope, table smashes and drop kicks galore.

After a few minutes that most certainly felt like hours to Casimero’s team, they were escorted in an armored vehicle to their hotel, where they remained until a police escort drove them to the airport without their newly acquired belt, which had obviously disappeared during the attack. Broken ribs, bloody noses and a few bruises aside, everyone survived to tell the story, but it could have been a lot worse.

The aftermath was just as consequential as the proceeding itself. Lazarte was suspended for life after a hot mic in the ring caught him asking the referee whether he “wanted to make it out of here alive” at some point during the fight. The Philippine government sent a letter of complaint to its Argentine counterpart, and for a minute the whole thing turned into a diplomatic confrontation.

Lazarte didn’t fight again for over two years, putting on as much as 30 pounds before scaling them back for a few fights at a local level. He did manage to buy a house and a muscle car that he had to trade in for a cheaper model once his boxing days were over. He lives four blocks away from his biological mother, although they almost never speak. He is now in charge of sweeping 21 city blocks on both sides, and he is happy to have that job in a city that boasts one of the country’s highest year-round unemployment rates (close to 14%) except during the months of January and February, when its population swells up to 8 or 10 times its usual number, with tourists coming from all over Argentina searching for a busy and exciting nightlife, a string of what were once nice beaches now ruined by overpopulation, and yes, quality sporting events.

And of course, for the cash-strapped low-budget tourists who cram the labor union-run hotels in the city, there are plenty of cheap sideshows to enjoy: bustling musicians, street performers, comedians shouting out jokes for tips, and yes, the occasional all-out brawl after a world title fight somewhere in the suburbs.