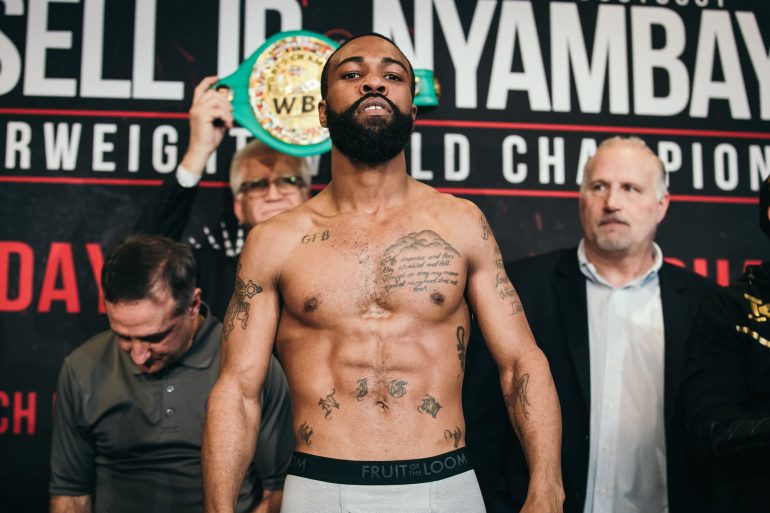 Magsayo (24-0, 16 knockouts) may have won on the scoreboard, though Russell (31-2, 18 KOs) may have gained a great deal of redemption by winning over the doubters.

Russell fought the majority of the fight with one arm and was only able to throw 27 punches per round, a gaping drop from his 72-punch average output per round. He rarely threw a punch, but he also rarely got hit.

The telling point in the fight came with 2:31 left in the fourth, when Russell stumbled and shook out his right shoulder, like there was something wrong with it.

From the fourth round on, the Maryland southpaw did not throw a jab. An interesting point is the previous eight opponents landed 28.7% of their power punches against Russell, while Magsayo landed 41% of his power punches (140 of 340).

Russell fought a world-class fighter with one arm for eight rounds. His courage and determination may have swayed more fans in his favor than in any one of his victories.

The scores indicate how close the fight was. Magsayo won 115-113 on the scorecards of judges Mark Consentino and Henry Grant, overruling Lynne Carter’s 114-114 draw.

“I think I proved how much better I am fighting with one arm,” said Russell, who is still waiting on a diagnosis of his injured right shoulder. “I hurt my arm hitting him in the head in the fourth round. He didn’t do anything to hurt me. People, I felt, saw brilliance on January 22.

“I still say I won that fight—with one arm. I hurt my arm two weeks before the fight. It was an old injury that I had before the 2008 Olympics. I had a torn tendon in my right shoulder. I was told to get surgery, but I built my muscles around it and was still able to fight effectively.

“I thought I could jab and use my right as a measuring stick and use it to finesse a situation. The shoulder was damaged to being with, and by hitting him in the head, that damage was increased.”

Russell plans on coming back later this year, depending on how quickly he recovers from the injury.

Entering the fight, Russell had averaged 37 jabs thrown per round, but the right shoulder injury caused him to stop throwing his jab. Another interesting nugget is that despite Russell not landing a jab from the fourth round, he still landed more total jabs (11) than Magsayo (10).

“I didn’t know that,” Russell said. “This is supposed to be about being hit, and not getting hit. I want another shot against him, depending on how injured my shoulder is. I know I was hitting Magsayo, and he wasn’t hitting me.

“People got to see intellect over athleticism. I was in control the entire time of the fight. I fought a world-class fighter with one arm—and I made it look easy. I wasn’t able to use all of my tools.

“I would have stopped him. I would have got him out if I had two hands. I had him down from timing him, and I touched him at will.”

After the fourth, Russell finished each round in his corner. That was design, and that’s all he revealed.

“I think I have gained a lot of fans, because they saw my heart and my will and fight fans appreciate that,” Russell said. “I’m grateful that everyone got a chance to see my skillset. I definitely feel like I gained from that fight and that situation.”

Eight rounds with one arm—against a world-class fighter.

“And guess what, Magsayo won’t rematch me, either,” Russell said. “The fans should want to see that fight again—with me being fully healthy.”