Erik Bazinyan takes on Reinaldo Paniagua in Montreal on March 3 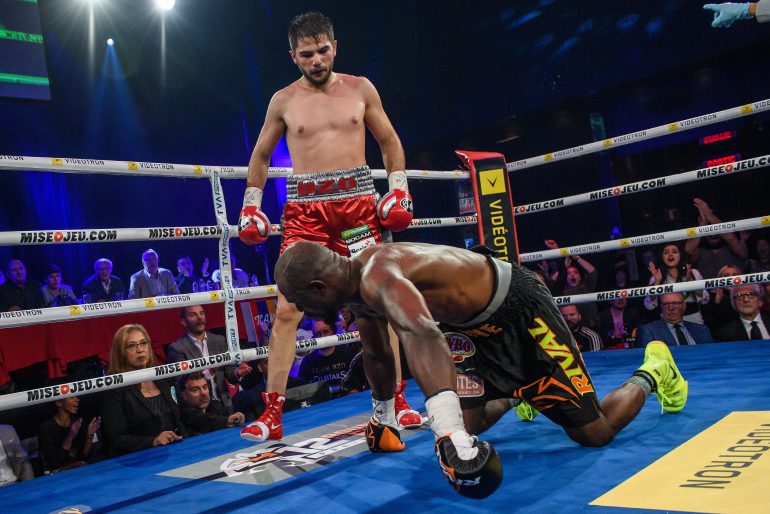 Bazinyan puts a foe down. He's finished foes in 20 of his 26 outings. (Photo by Vincent Ethier for Eye of the Tiger)
10
Feb
by Francisco Salazar

Unbeaten super middleweight Erik Bazinyan is preparing himself to breakthrough this year and emerge as a strong contender.

Before facing the upper echelon of the division, Bazinyan must get past once-beaten Reinaldo Paniagua March 3 in a 10-round bout at the Casino de Montreal in Bazinyan’s hometown of Montreal, Canada.

Bazinyan (26-0, 20 knockouts), who is originally from Yerevan, Armenia and now resides in the Montreal suburb of Laval, has defeated modest opposition on his way to building an unbeaten record. In his last bout on June 6, Bazinyan stopped gatekeeper Scott Sigmon in round 2. He has stopped 11 of his last 12 opponents.

The 26-year-old has defeated the likes of David Zegarra, Alan Campa and Saul Roman, all of whom were stopped or knocked out.

Bazinyan has worked with trainer Marc Ramsey to improve his skill-set to complement his punching power. Eye of The Tiger Management is confident Bazinyan is ready to take that next step later this year.

“We (believe) Erik is ready to make the final push to put himself in the big fights at super middleweight,” Camille Estephan told RingTV.com. “We want to give him three to four fights this year, and hopefully get him in a position for an elimination bout for a major (world) title.

Bazinyan is not overlooking Paniagua (17-1, 16 KOs), who resides in Tijuana, Mexico. The 23-year-old knocked out journeyman Jorge Sillas in round 2 of his last bout on October 30. Paniagua has won his last eight bouts, all by knockout, since suffering his only loss as a pro to Elvis Bravo Salazar in March 2019.

While fights await Bazinyan later this year, he must win impressively against Paniagua and send a message to the rest of the top fighters at 168 pounds.

“(Paniagua) is a young, good boxer with a good record but I have more (than enough) experience to handle him,” said Bazinyan. “He is a Mexican boxer with a Mexican style and I think he will try to make a good fight, but I know what I have to do to win.

“The super middleweight division is very hot right now and I see myself with (the) top fighters this year. I’m ready for big fights and everyone will see me there soon.”

In the co-feature, hard-hitting middleweight Steven Butler will square off against Hector Zepeda in a 10-round bout.

Butler (28-3-1, 24 KOs), who resides in Montreal, has not fought since losing by knockout to gatekeeper Jose de Jesus Macias on January 21 of last year. Butler’s previous fight was a knockout loss to Ryoto Murata in December 2019.

In a clash of unbeaten female featherweights, Martine Vallieres Bisson (4-0, 1 KO) of Montreal will face Mexico’s Yolanda Vega (5-0) in a six-round bout.