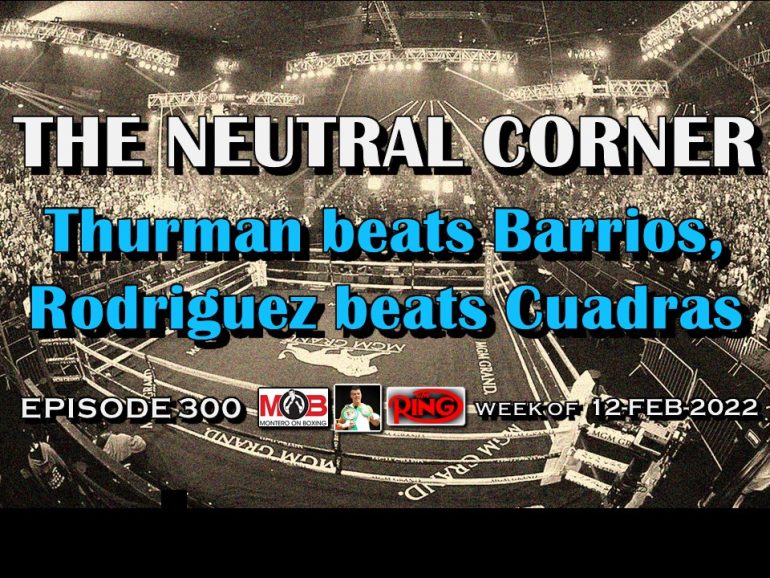 On episode 300 of The Neutral Corner boxing podcast, host Michael Montero celebrated another milestone for “TNC”, which has grown by leaps and bounds since he created the show in Los Angeles six and a half years ago.

TNC joined The Ring in July of 2020 with episode 229, which featured special guest Charles Conwell. It has been quite a journey so far through 300 episodes, with the show poised to do even bigger things in the future.

On Saturday, February 5, there were three cards of note.

In Cardiff, Wales, Chris Eubank Jr dropped Liam Williams four times, winning a unanimous decision in a 12-round middleweight bout. In Phoenix, Arizona, Jesse “Bam” Rodriguez had a breakthrough performance against former titleholder Carlos Cuadras . Rodriguez, who stepped in to replace Srisaket Sor Rungvisai after he withdrew from the fight due to an illness, beat Cuadras by unanimous decision to claim a vacant 115-pound title.

In Las Vegas, Keith Thurman scored a unanimous decision win over Mario Barrios in a PBC on Fox PPV headliner. Both fighters were coming off losses, and Thurman was returning from 2.5 years out of the ring. Leo Santa Cruz and Luis Nery, both coming off losses as well, scored wins on the undercard.

Well over 30 callers dialed into the show this week, including many first-time callers. Montero was only able to get to about half of them due to time constraints. In fact, about 80 minutes of the two-hour long broadcasts were with callers.

There are simply too many quotes to post this week. It would be unfair to only post a few of them, so instead we’ll just say THANK YOU to everyone for your great calls and continued support!