John Ryder: ‘This fight with Danny Jacobs is one I’ve needed’ 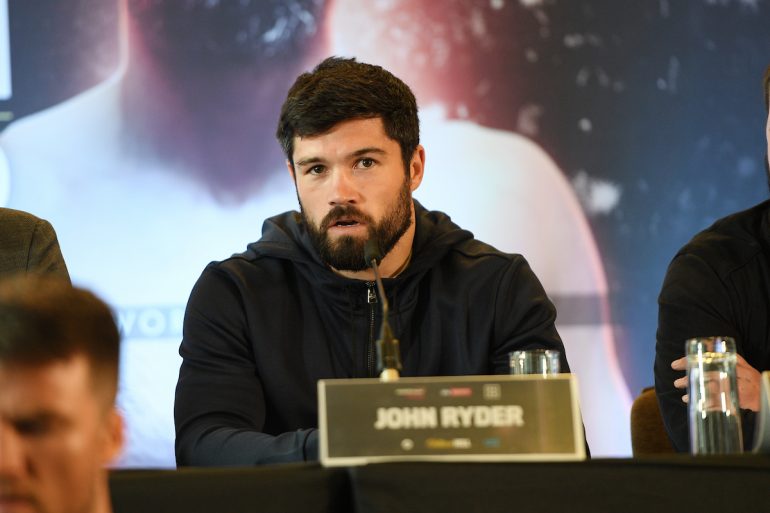 John Ryder has had his share of big fights but they don’t get much bigger than what’s in front of him on Saturday night.

The southpaw known as ‘The Gorilla’ meets Danny Jacobs in London’s Alexandra Palace and he knows full well what he’s up against when he meets the talented and experienced American.

“His career speaks for itself,” said Jacobs during fight week. “He’s been there, done it and done it again and now he is where he is. He’s a future Hall of Famer without doubt, but this is a fight I’ve needed for a long time and it’s a fight I’ve wanted for a long time, a fight of this magnitude. Coming off Covid and a slow two years, it’s great to start 2022 with a fight like this.”

Ryder, 33, has sometimes frustrated. Some felt he was hard done by against Callum Smith in his only world title attempt so far but then he’s not delivered when others expected him to. Trainer Tony Sims thinks he’s a big game player and the better the opponent, the better the performance.

Ryder has won 30 and lost five and admits he’s had his ups and downs.

“It’s a hard thing,” he said, of the change fighting at a high level, then ticking over and then with the environmental changes because of Covid. “Boxing behind closed doors isn’t for everyone. Myself, I found it a bit strange and a bit odd and I think it threw up some strange results but it’s nice to have the crowds back and to see boxing back to where it should be.”

He and Jacobs have plenty on the line, even though they are at differing stages of their careers.

“Massively,” Ryder agreed. “I feel like for both of us… Danny has been there and done something I dream of doing so for him I think it’s just about his legacy, but for me I’ve still got dreams and aspirations in this sport and I still want to go on and be a world champion. If all goes well on Saturday night, I’ll be getting close to a mandatory position and hopefully getting my shot at another world title.”

He will be flanked on the night by Tony Sims, his trainer, and a man he has an immense amount of respect for.

“There’s not many men like Tony Sims,” Ryder said. “I’ve said it before and I’ll say it again, he’s a rare breed and he’s believed in me at times when I didn’t believe in myself and really made me kick on and made me believe I can achieve things in this sport. He made me believe I could go in there against Callum Smith and do a job and I did the job he asked of me. I didn’t get the decision that night but there’s a mutual respect and not enough men in this world are like Tony Sims.”

Should Ryder get by Jacobs, he wants world titles and he also wants to fight the best. His name is often brought up when there are talks of Canelo boxing in Wembley Stadium, should that ever happen.

“If Canelo’s coming to the UK, I’d love to be the man in the opposite corner but obviously we’ve got to take care of business on Saturday,” Ryder said. “I don’t know if Canelo knows what he’s doing next yet, let alone anyone else! Obviously Canelo’s got everything tied up at 168 now. There’s a few eliminators going down but I think he [Jacobs] is the biggest name available at 168 so I think this is the best fight for me.”