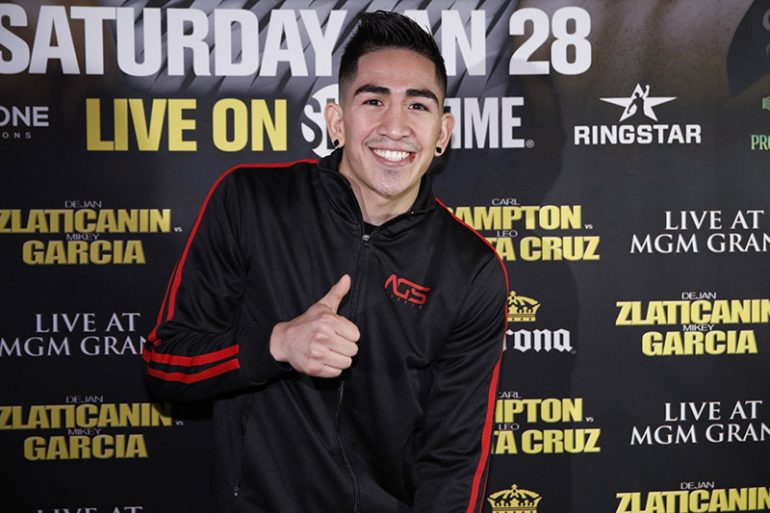 LAS VEGAS — Leo Santa Cruz is back in victory lane.

It was a bumpy ride, but Santa Cruz got the checkered flag. All three judges ruled in favor of the popular Mexican-American for a unanimous decision win.

Santa Cruz was cut in the second round from an accidental headbutt. Following a brief delay, he whacked Carbajal with a
sustained attack consisting of hard right hands to end the round.

He continued his dominance in the third with a sustained body attack. Santa Cruz, who has won titles at 118, 122, 126, and 120 pounds, hurt Carbajal with a left hook to the body, and he looked to hold. Carbajal then continued with his dirty ways with yet another headbutt that opened a cut above Santa Cruz’s right eye.

“The cut over the eye happened in the second or third round. He headbutted me, and then right away I felt it was bleeding,” Santa Cruz said. “The blood was going into my eye. Luckily it was only a little blood, and my vision was slightly blurry at times, but I didn’t want that to stop the fight.

Despite the antics from Phoenix, Arizona’s Carbajal, it was one-way traffic the rest of the way for Santa Cruz (38-2-1, 19 KOs), who seeks to move down in weight for another run at world title glory.

“We’re going to go back to the gym, get better and work on what we did wrong. We want to unify and defend our title. We want all the champions at 126 pounds.”

The streaking junior middleweight contender scored a sixth-round knockout of fringe contender Vladimir Hernandez, who made it
challenging early as he stayed right in Ramos’ chest and didn’t allow his bigger adversary to plant his feet.

Early in round four, Ramos caught Hernandez with a lead left the body that seemed to bother him.

Ramos won the fifth round on his defense alone. Hernandez threw combinations with bad intentions but missed with nearly every punch. Ramos, however, did not miss, as he connected with a counter left hand that nailed Hernandez right on the button.

According to Compubox, Ramos (18-0, 15 KOs), a 20-year-old southpaw from Casa Grande, Arizona, connected on a whopping 53 percent of his power shots, which ultimately ended the fight in round six.

Ramos drilled the California-based Mexican southpaw Hernandez (13-5, 6 KOs), 32, with a big left hook that left him out of his feet. He subsequently followed up with a beautifully-executed combination that forced referee Mike Ortega to call off the fight.

“I was boxing him smartly, and I wasn’t really looking for the knockout,” Ramos said after the fight. “He’s a tough, durable guy. I broke him down round by round. [I landed] a clean shot that hurt him, so I got the job done.

“The plan was to knock him out. I wanted to make a statement, but we didn’t go in looking for it, just to dominate.”

And that he did.

However, one judge somehow scored it for Castro. Tim Cheatham submitted a tab of 95-94 for the Arizona-based Mexican. That was ultimately overruled by Max DeLuca and Steve Weisfeld, who had it 95-94 and 96-93, respectively, for Nery, who won for the first time since losing his previously unbeaten record and the WBC junior bantamweight title to Brandon Figueroa last August in a seventh-round knockout.

Nery, who also held a 118-pound title, dropped Castro off the bat with a straight left hand.

“My experience was definitely a factor,” he stated. “I have three world title fights under my belt and have faced tougher opponents than he has. It showed tonight.”

Castro, who entered the bout unbeaten through 27 bouts, including a 10th-round knockout of former title contender Oscar Escandon last August, seemed lost for the rest of the fight.

“It was my mistake [getting knocked down in the first round],” Castro said. “I thought I could have won the fight, but it’s boxing, part of the sport. I don’t take it as a loss. I take it as a learning experience.”

Nery capped off an impressive eighth frame nailing Castro with powerful, unanswered combinations downstairs and upstairs that sent Castro into the ropes.

“I wanted to show everyone that I’m not just about haymakers. If I wanna brawl and be tactical, I can do that, too.

“I knew I could knock him out, but I wanted to win proving I could box, too. I would counter-punch and attack the way I wanted to.”

Castro had no issues with the cards.

“The scores were fair. He did enough to win. The first round shocked me. I wasn’t really hurt; it was more of a shock. He connected with a good shot. It happens.”