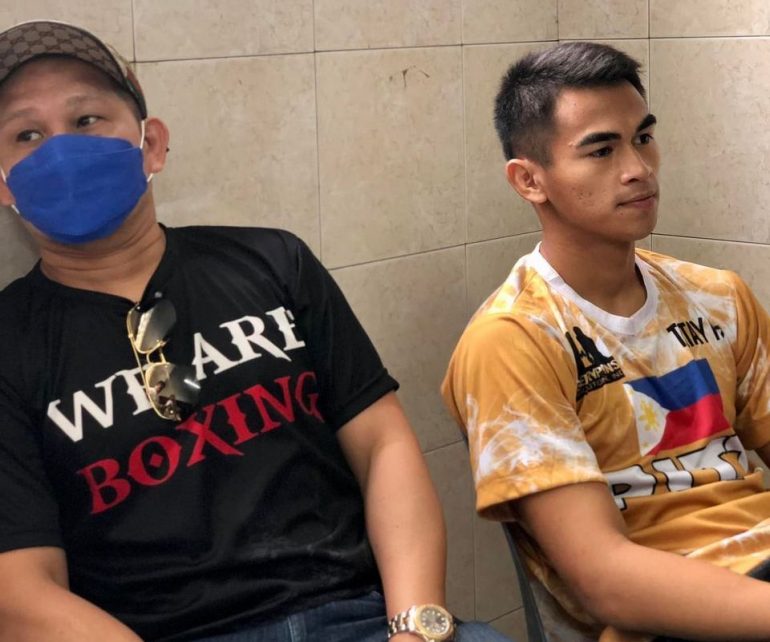 Gerry Penalosa sits with Criztian Pitt Laurente in the dressing room prior to the bout which was canceled.
05
Feb
by Ryan Songalia

The ninth pro fight of former Philippine amateur star Criztian Pitt Laurente was surprisingly canceled at the last minute, causing his promoter to voice his outrage.

According to former champion turned promoter Gerry Penalosa, Laurente was warming up and preparing to step into the ring when a ringside physician who had been licensed by the Games and Amusements Board (the Philippines’ pro sports governing body) requested to see the pre-fight medical scans of the 22-year-old Laurente.

The Cebu-based Dr. Jose Unabia allegedly told Penalosa that there was something “suspect” about one of Laurente’s pre-fight medical scans, and refused to allow the fight to proceed. Penalosa says Laurente’s scans were all up to date, and he had been licensed and cleared to fight by a physician in Manila before leaving to Cebu three weeks before the fight to meet quarantine requirements, and had passed a COVID-19 test.

The GAB medical division chief, Dr. Redentor Viernes, had called Dr. Unabia to advise that Laurente should be allowed to proceed with the fight, but Dr. Unabia insisted on blocking the fight, said a commission source. Penalosa says Laurente was the only boxer whose medicals Dr. Unabia asked to inspect.

Penalosa says he will be bringing the scans to another physician for further opinions before deciding how to proceed.

There were no tickets to reimburse, as the show was to take place in front of an empty crowd. Still, the cancelation of the main event on the evening of the fight could potentially shake the confidence of TV networks and sponsors to invest in pro boxing, Penalosa worries. The fight was set to headline a card on One Sports in the Philippines.

Four other bouts scheduled for the undercard proceeded as planned, with Alex Del Rio knocking out Lenbert Unabia in the first round, Reycar Auxillo knocking out Carlos Agustin in round two, John Mark Tihuk stopping Jeffrey Stella in round 3 and Kenneth Llover knocking out Rollie Dorong in four rounds.

Games and Amusements Board chair Abraham “Baham” Mitra says the incident will undergo an internal investigation, and declined to comment further until then.