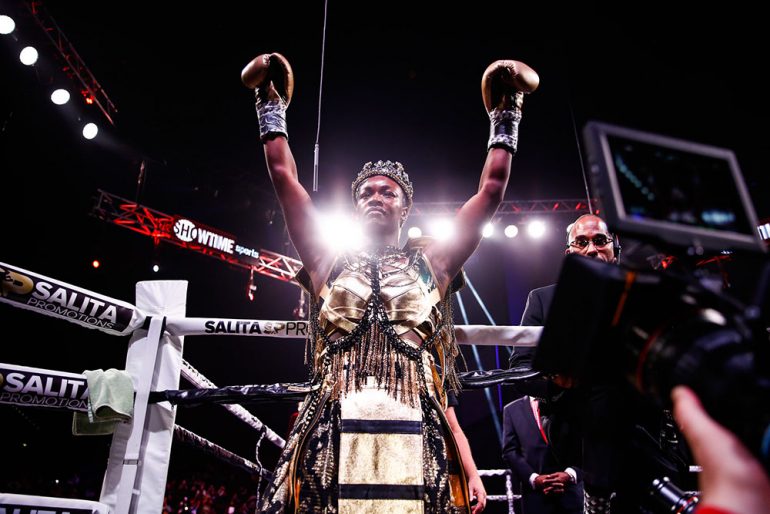 Claressa Shields put on a show and retained her Ring, IBF, WBA and WBC middleweight titles against the game but outgunned Ema Kozin over 10-rounds on Saturday at the Motorpoint Arena in Cardiff, Wales. It was the co-featured bout to the Chris Eubank-Liam Williams middleweight fight.

Shields began well and dictated the action with her jab. By the third round she had her Slovenian opponent backing up and hurt her with a body shot.

The self-proclaimed “GWOAT” intensified the attacks and looked to be breaking Kozin down in the fifth round. To Kozin’s credit she dug in and survived the round.

Shields continued to pepper Kozin in the seventh and landed a hard combination at the end of the round. The 26-year-old two-time Olympic gold medalist seemed happy to go the 10-round distance in her first boxing match in 11 months, cruising to a unanimous decision. Shields won by unanimous shutout scores of 100-90.

The win keeps alive the prospect of Shields facing the only woman, amateur or professional, to have beaten her, Savannah Marshall, later this year. The two engaged in some heated verbal back-and-forth immediately after the fight.

.@Claressashields and @Savmarshall1 having words after #ShieldsKozin.

On the undercard, 2020 Olympian Caroline Dubois made a successful debut claiming a six-round decision over Vaida Masiokaite (2-15-4, 1 KO). Dubois outclassed her Lithuanian opponent, winning a 60-54 decision.

From the opening bell both men traded punches and showed wear and tear as the fight went on. Referee Reece Carter scored the fight 78-75 for the Welshman. Jenkins positioned himself for domestic titles; while Indongo, who has lost for the third consecutive time, is past his prime.

Heavyweight hopeful Otto Wallin (23-1, 14 KOs) scored a routine eight-round decision over Kamil Sokolowski. The 31-year-old Swedish-born fighter stayed in the hunt for bigger and better fights ahead, winning 79-74 on the sole scorecard of referee Reece Carter.