Jesse Rodriguez: “Fighting for a world title was just destined to happen” 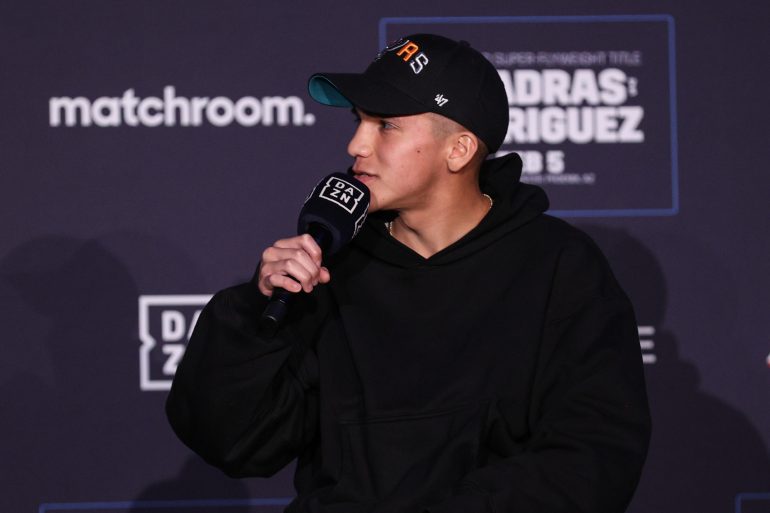 Jesse Rodriguez speaks at the final press conference for the February 5, 2022 Matchroom Boxing card at the Footprint Center in Phoenix, Arizona.Photo by Ed Mulholland/Matchroom.
04
Feb
by Francisco Salazar

It was one week ago today that an announcement was made of Jesse Rodriguez signing a promotional deal with Matchroom Boxing. The news was met with modest banter and little surprise as Rodriguez had previously fought on a handful of Matchroom Boxing cards.

Rodriguez will square off against Carlos Cuadras for the vacant WBC junior bantamweight title Saturday night at the Footprint Center in Phoenix, Arizona. The 12-round bout will headline a Matchroom Boxing card that will stream live on DAZN (8 p.m. ET/ 5 p.m. PT).

Cuadras was originally scheduled to face Srisaket Sor Rungvisai in a rematch of their May 2014 clash, which Cuadras won by technical decision. Sor Rungvisai reportedly backed out of Saturday’s fight after failing to secure a visa to enter the United States and there were sources reporting he also tested positive for COVID-19.

Rodriguez (14-0, 10 knockouts) took the fight Sunday when he was presented with the offer.

The 22-year-old, who resides in San Antonio, Texas, is coming off a knockout win over Jose Burgos on October 19 in Fresno, California. While he has fought and dominated modest opposition, Rodriguez will take a major step-up in opposition when he squares off against Cuadras, who held the WBC junior bantamweight title.

The Mexico City resident would lose the WBC title to Roman ‘Chocolatito’ Gonzalez in September 2016.

Some may think Rodriguez may be in over his head against Cuadras, but Rodriguez believes he is more than ready to face the likes of Cuadras and be victorious.

“This is just another fight for me, but with much more on the line,” Rodriguez told The Ring early Thursday morning. “I don’t let people’s words get to me because at the start of the fight, it’s just Cuadras and I in there. I’m confident in my training and preparation, and I believe it will showcase Saturday night. 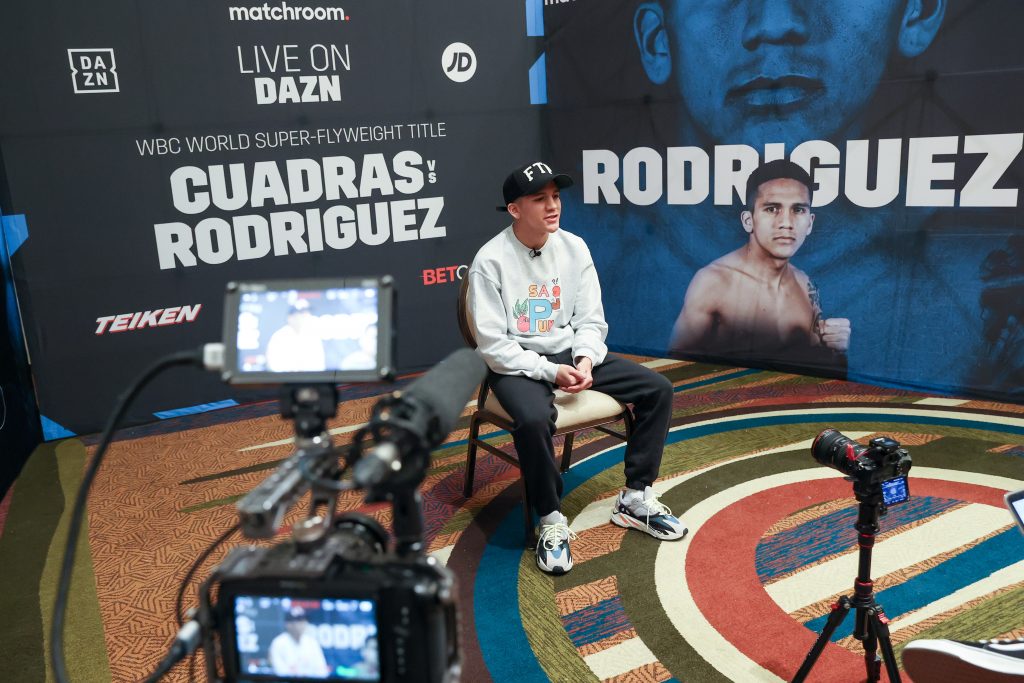 Jesse Rodriguez has grown up under the spotlight since his late teens – Photo by Melina Pizano/Matchroom.

Rodriguez is also co-promoted by Akihiko Honda, who runs Teiken Boxing Promotions. After a stellar amateur career, Rodriguez made his pro debut at the age of 17 in March 2017.

While blazing his own trail in the pro ranks, Rodriguez has also seen the career of older brother and junior bantamweight Joshua Franco rise to contender status with victories over Andrew Moloney and Oscar Negrete. Both are trained by Robert Garcia in Riverside, California.

Rodriguez believes a lot of the development of his career is due to training alongside his brother and the quality sparring he receives at Garcia’s gym.

“I feel like having Robert in my corner is an automatic advantage over any opponent,” said Rodriguez, who is ranked No. 5 by The Ring at 108 pounds. “He’s been in every situation possible, so he knows what to do at any time. Training with Robert has made me the fighter I am today. (He has) helped me with angles, footwork, and jab. Most importantly, my mentality has only gotten stronger, especially with the sparring I get at (the) Robert Garcia Boxing Academy.

“Joshua’s success means so much to me. Seeing him win a (secondary) world title was one of the best moments of my life. I’m so happy for him. I know what he’s been through, in and out of the ring, so seeing him where he is at, it’s amazing. I love training alongside my brother, especially since we have no family in Riverside, where we train. He’s definitely a big part of my motivation.”

Garcia has told The Ring in previous interviews Rodriguez is one of the most gifted fighters he has ever trained. Garcia also believes Rodriguez will win world title belts in at least four weight divisions.

While fighting for a world title may have come sooner than later and in a different weight division, Rodriguez believes he will win at least another world title belt this year.

“After Saturday night, I plan on getting a title at 108 (pounds), then eventually working my way to a world title at 112. The opportunity to fight at 115 came and I couldn’t pass it up.

“When I got the call, I had no hesitation to take this fight. Every training camp, I train as if I’m fighting for a world title. I give 110 percent every day and I know my team and I will be ready for Saturday night.”