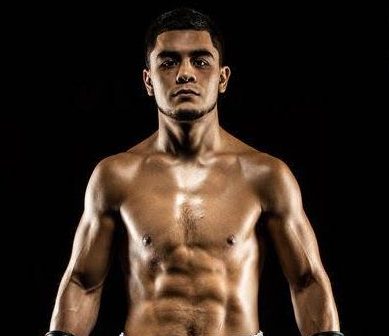 There were many paths Edward Vazquez could have taken. The 26-year-old featherweight from south Fort Worth, Texas, knows that if he took one move to the left, or one to the right, instead of the path he has taken, his life could have gone in a completely different trajectory.

As it stands, his boxing life is heading for an early career crossroads showdown in his first 10-round fight on Saturday (8 p.m. ET/ 5 p.m. PT) against featherweight Ray Ford (10-0-1, 6 knockouts) on the undercard of the DAZN’s Carlos Cuadras-Jesse Rodriguez main event for the vacant WBC world junior bantamweight title from the Footprint Center in Phoenix, Arizona.

Vazquez (11-0, 3 KOs) has a close friend he grew up with who is serving a life sentence for murder. The two still stay in touch. As teenagers, they would talk about one day doing what Vazquez is now doing—fighting on national TV. He defines the southside of Fort Worth as a place you wouldn’t want your car to break down in in the middle of the night.

The youngest boy of five, Vazquez was fortunate to receive great guidance from his parents and older siblings. Vazquez wanted to keep his friend’s name to himself for this story due to a possible appeal of his sentence.

“I grew up with the kid and the two of us were best friends, he pretty much lived with me, and I lived with him,” Vazquez recalled. “I taught him how to box. I had him under my wing for a long time. I considered his mom and dad as my mom and dad, and likewise with him towards my parents.

“We were that close.”

Over time, as Vazquez drifted more to boxing, he watched as the street life clutched his friend. The pair were inseparable from the ages of 12 to around 16, and it was 17 when Vazquez’s friend committed the crime.

“Me and my girlfriend, who I’ve been together with since I was 14, talk all of the time about the fine line we walked. When we were 16, we would drive with him all of the time. I tried talking to him. We saw the s—y path he was taking. There is only so much you can do, and then he made a dumb decision. This was something that happened over some drug deal, and who knows what would have happened.”

What did happen is Vazquez stuck with boxing. His friend took a different path. He’s behind bars. Vazquez and his girlfriend are the newly minted parents of a baby girl who will turn two in March.

Vazquez is fighting on TV. And if he wins, he’ll punch his ticket to bigger opportunities at 126.

He may be considered the “B-side” against Ford, but he’s fine with that.

“Ford looks the part and plays the part. His athletic ability and speed can only get you so far, but we’ll actually see what he can do. I also know that, how do I say this, he doesn’t have the highest boxing IQ. He doesn’t have any brains. I definitely feel like I’m stronger, and I’m more conditioned than him. Me and my team have come up with a better game plan.

“I think my discipline outside of the ring will play a huge part in the fight. I know he’s not going to outwork me. On Saturday, you’re going to see me test his will very early on. He’s a flashy guy, who comes in with a little bit of flash. I’m going to shut that down early. As I start to break him down, I think eventually he’ll look for a way out.

“He’ll start complaining to the ref maybe in around round five or six. If the ref doesn’t stop it, or I don’t stop him, he’ll wound up quitting. He won’t have an answer for me.”