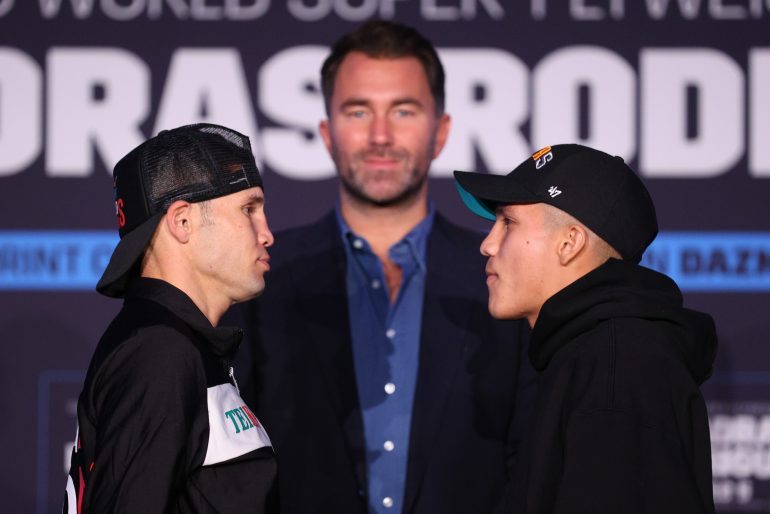 Carlos Cuadras and Jesse Rodriguez pose after the final press conference for their upcoming February 5, 2022 bout at the Footprint Center in Phoenix, Arizona. Photo by Ed Mulholland/Matchroom.
03
Feb
by Diego Morilla

Carlos Cuadras and Jesse Rodriguez were not planning to fight each other on Saturday, but you wouldn’t be able to tell that from their words during the press conference ahead of their vacant WBC junior bantamweight title bout at the Footprint Center in Phoenix, Arizona.

“It’s a one-time opportunity, and when I got the call I had no hesitation. I am ready for this. This is my moment. San Antonio will have a new champion and a star will be born” said Jesse Rodriguez (14-0 10 KOs) who will be taking on former titlist Cuadras on the shortest of notices after being called up three days ago to fill in for Thailand’s Srisaket Sor Rungvisai, who fell ill upon arriving in the US.

Rodriguez had announced a promotional deal with Eddie Hearn and Matchroom last week, with the intention of closing in on a title shot in 2022 with a fight on Saturday night’s bill. Instead, he was pushed right under the spotlight in his very first fight under Hearn as Rungvisai was forced out of the rematch with Cuadras over the weekend through a non-COVID related illness last Wednesday.

Rodriguez, who recently turned 22, didn’t expect it to be so soon but he’s ready to take a golden opportunity with both hands and join his brother Joshua Franco as a world titleholder.

“We trained to fight and defeat anybody at any weight, and Saturday night is going to show” said Rodriguez, who will be jumping up two divisions from his last bout in order to gain access to his first title shot.

Cuadras (39-4-1 27 KOs) was aiming to repeat his victory over Rungvisai where he ripped the green and gold belt from the Thai star in May 2014 in his Mexico homeland, but now the 33-year-old refocuses on a new test in the young Rodriguez.

“What I want the most is to become champion again. I hoped it would be Rungvisai, but we got him and we are ready” said Cuadras during the brief exchange of words hosted by promoter Eddie Hearn. “(Jessie) is a good fighter, I am going to be careful but in the end I am going to give him medicine. I expect Jessie to be prepared so he doesn’t go down quickly and we end up having a great fight.”

This will be the second time that the Cuadras has tried to reclaim the throne and comes on the back of his last battle for the belt where he floored defending champion Estrada in the third round of his defense before the champion prevailed in Mexico in October 2020.

“I am looking forward to it. When you have a Mexican against a Mexican-American, you got war. Just as it happened with Chiquita (Gonzalez) and me” said former champion and local hero Michael Carbajal during the introductory remarks, recalling his legendary bout against one of Mexico’s greatest flyweights of all time. The stage is now set for Cuadras and Rodriguez to repeat all that magic.

Cuadras and Rodriguez will only headline what looks like a big night of action in Phoenix. 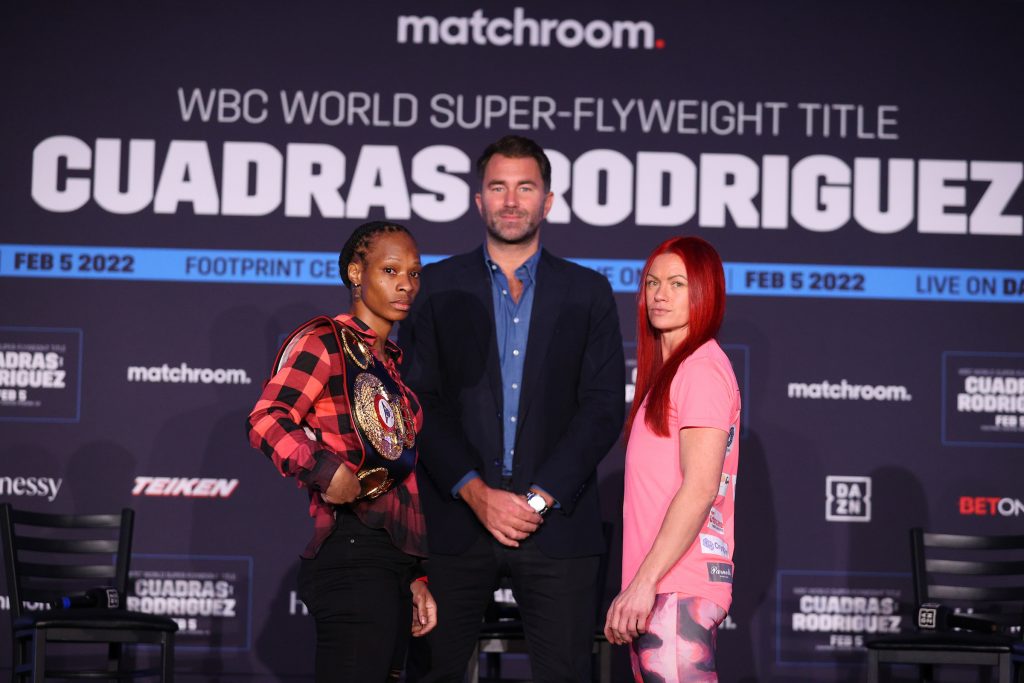 Jamie Mitchell (left) and Carly Skelly pose after the final press conference for their upcoming February 5, 2022 bout at the Footprint Center in Phoenix, Arizona. Photo by Ed Mulholland/Matchroom.

“I am definitely ready to defend my title. She is a great fighter and a great opponent, but I am going to show why I am world champion” said Mitchell ahead of her defense against Skelly, while the challenger replied that “I know that I gotta go in and give everything. It’s going to be an explosive fight”

“This isn’t my first step-up fight, I had three and I won decisively. I am as prepared as I’ve ever been, I am taking that title back home on Saturday” said Edward Vazquez, while Ford replied that “he’s been doing a lot of talking on social media. I want to see that energy in the ring.”