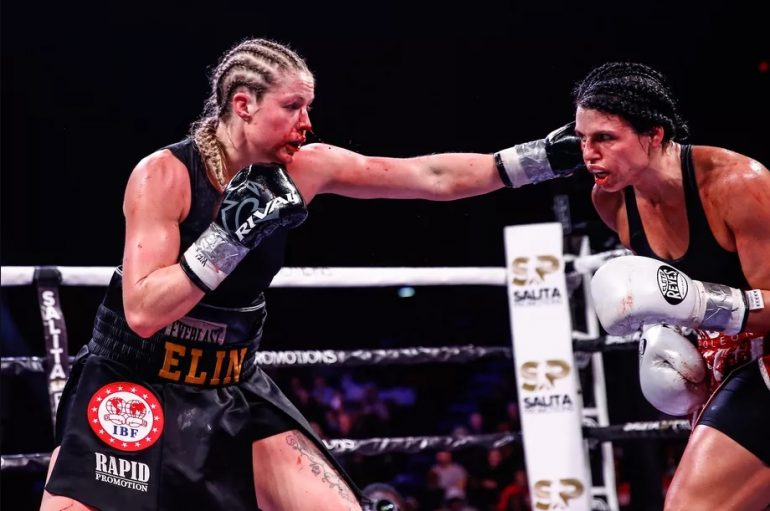 The new undisputed ruler of the 168lb division will be crowned at Madison Square Garden in New York on Saturday April 30, live worldwide on DAZN and on the undercard of the historic clash between Katie Taylor and Amanda Serrano, brought to you by Matchroom Boxing and Most Valuable Promotions.

Cederroos and Crews-Dezurn (rated No. 1 and 2 by The Ring in the super middleweight division) were due to clash in September but the Swede was forced out of the hotly anticipated clash, leading it to be shelved for a second time, having also been slated for June but cancelled for the first time.

WBC/WBO titlist Crews-Dezurn (7-1 2 KOs) officially defends her straps for the first time, after the first defense of her WBO and second of the WBC against Alejandra Jiménez in January 2020 was declared a no contest after Jiménez failed a drug test. Crews-Dezurn won the WBC crown in just her fifth pro fight in August 2018, edging out Maricela Cornejo and added the vacant WBO strap in her first defense of the WBC belt when she rematched Cornejo 11 months later.

IBF/WBA champion Cederroos (8-0 4 KOs) is an undefeated former pro soccer player-turned elite fighter who will be looking to add the Virginia fighter’s belts to her straps and make it back-to-back wins over American fighters in her second fight in the US. The 36 year old made her Stateside bow against Alicia Napoleon-Espinosa in Atlantic City in January 2020, crucially flooring the New Yorker in the second round on the way to unifying the IBF strap with Napoleon-Espinosa’s WBA title by one point on all three cards.

The pair have been itching to get their hands on each other, and now they get their chance on the biggest platform possible, with Taylor and Serrano meeting in the biggest female fight of all time – and both Crews-Dezurn and Cederroos are ready to shine in the spotlight.

“Many iconic moments have happened at MSG, especially in boxing,” said Crews-Dezurn. “So to be alongside to two of the best P4P boxers in the sport and make history becoming the undisputed champion makes everything in my career worth it thus far. I bet on myself in my iconic pro debut and now it’s time bring home the jackpot. New York is where dreams are made of and mine will come true April 30, I am winning all the belts.”

“I have been waiting for this fight for so long now – but this has made it worth the wait,” said Cederroos. “To be fighting at Madison Square Garden is a dream come true and to be doing so on such an historic night for women’s boxing is a real honor.

“I know that Franchon is confident that she will win, but she’s never fought anyone like me. I will be taking those belts back to Sweden and making it a night I will never forget.”

“I am thrilled to be delivering this dream opportunity to Franchon and Elin,” said promoter Eddie Hearn. “What a night it will be for them, Katie and Amanda – truly showcasing the rise of women’s boxing on the biggest of all stages.

“They deserve all the credit in the world for their work in raising the profile of the sport, but this is business – the undisputed champion at 168lbs is going to be in massive fights this year, so they will both leave everything on the line.

“With our main event, Crews-Dezurn vs. Cederroos and the must-win crossroads clash between Jessie Vargas and Liam Smith, we’re building an unmissable night of action in New York on April 30.”

Years in the making, Taylor vs. Serrano is the biggest fight ever in women’s boxing between two of the top pound-for-pound fighters of the world (Taylor being No. 1 and Serrano No. 3 according to The Ring) and one that will not only make boxing history, but women’s sports history. MSG has hosted thousands of fights through its illustrious years, beginning more than a century ago on July 17, 1882; now, 140 years later, this matchup finally marks the very first time two female fighters are headlining a combat sports event at ‘The World’s Most Famous Arena’.