The Neutral Corner: Episode 299 – Previews of Cuadras vs Rodriguez, Thurman vs Barrios 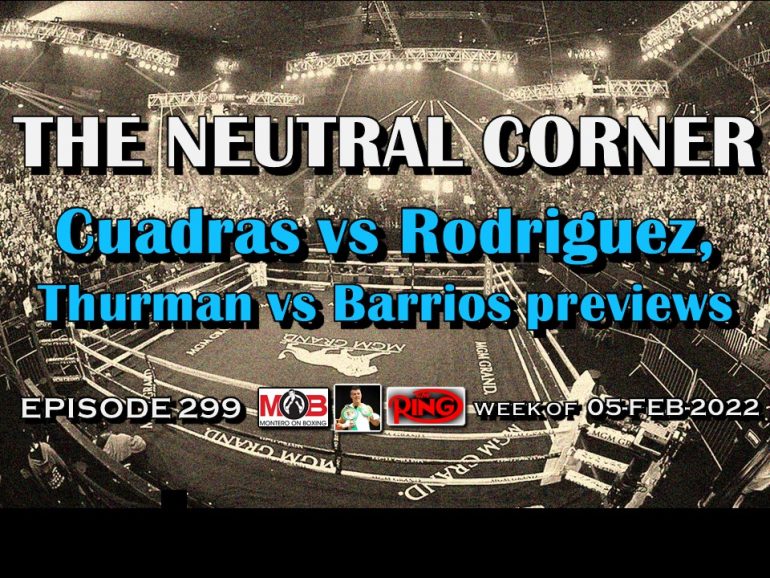 On episode 299 of The Neutral Corner boxing podcast, host Michael Montero briefly gave his thoughts on the NFL playoffs, then got back to the boxing news.

Frank Warren successfully outbid Eddie Hearn for the rights to promote the WBC heavyweight title fight between champion Tyson Fury and mandatory challenger Dillian Whyte. Both Fury and Whyte stand to make career-high paydays if and when the fight comes off.

Also, a highly-anticipated matchup between Katie Taylor and Amanda Serrano is done for April 30 in New York City. Taylor will put her undisputed lightweight championship on the line against Serrano. The winner of this fight, being hyped as the biggest in the history of women’s boxing, will unquestionably be seen as the No.1 pound-for-pound female fighter in the world.

That same night in Ohio, Ilunga Makabu scored a split decision win over Thabiso Mchunu to defend his cruiserweight title. The fight headlined an untelevised show from Don King Promotions.

“The odds on the Thurman vs Barrios fight are interesting,” said Thad. “Thurman is less than a two-to-one favorite, which is mind-boggling because Al Haymon wants to feed him to Terence Crawford. He is going to get this win over Barrios by hook or by crook.”

“Two and a half years out of the ring, Thurman has not been active,” said Nacho. “I don’t care how much time he spends in the gym sparring, that can’t replicate the same conditions of an actual fight. And Barrios has been active.”

“Keith at one time was great, but forget about it, he’s going down,” said Bryan Tate. “I would not be surprised if he gets beat by Barrios.”

“I wouldn’t be surprised if Barrios pulls the upset over the weekend,” said Rich. “I think it just goes back to the inactivity of this era of fighters. I feel like these guys just fight for a paycheck.”