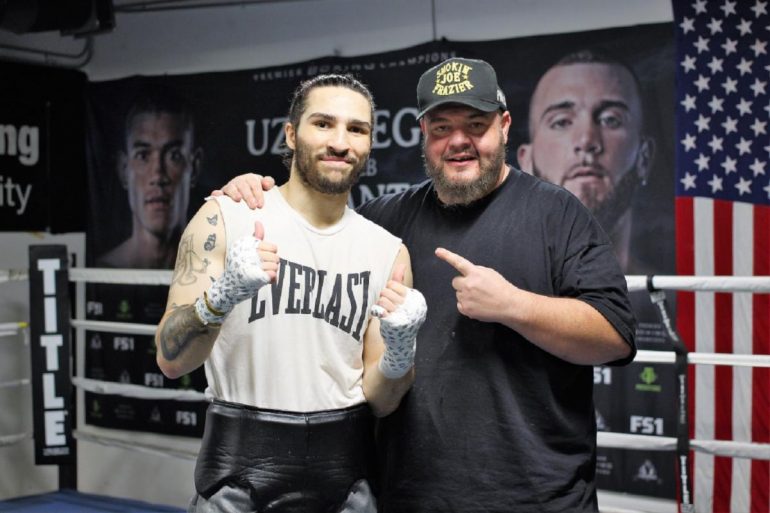 For close to a decade, Richard T. Slone would hear the diatribe every day at 2917 N. Broad St., above Glenwood Avenue, right smack in the eye of North Philadelphia’s urban blight. The teenaged English chap with the zeal to become a heavyweight world champion went to his idol, Joe Frazier, for guidance and wound up living in Frazier’s Gym from 1990 to ’98.

Each day, he would hear “Smokin’ Joe” curse out his rival, Muhammad Ali.

So, this is fitting.

Ali Walsh will be facing Jeremiah Yeager (1-1-1, 1 KO) in a four-rounder on the undercard of the 10-round Robson Conceiçao-Xavier Martinez junior lightweight clash from the Hard Rock Hotel Casino in Tulsa, Oklahoma, live on ESPN & ESPN Deportes (simulcast on ESPN+ at 10 p.m. ET/7 p.m. PT).

Slone, a noted artist for Ring, the International Boxing Hall of Fame and the BWAA, takes over for SugarHill Steward, who parted ways amicably with Ali Walsh, with the open possibility of training him again in the future.

“I was Joe’s fighter a long time ago. I left England when I was 16 to become a fighter and I had to fall back on the artwork when it didn’t work,” said Slone, who went on to work with the late Hall of Fame trainer Emanuel Steward at the fabled Kronk Gym. “I love Nico, who I came to know through his uncle, Mike Joyce, from Chicago. I found out he had a little nephew called Nico.”

Ali Walsh is coming off an admitted subpar performance in his last fight, a four-round majority decision over previously undefeated Reyes Sanchez on the Vasiliy Lomachenko-Richard Commey undercard in December 2021 at Madison Square Garden.

Ali Walsh, 21, had five finals that week, working on his bachelors’ degree in business entrepreneurship at UNLV. He’s not about to use that an excuse, though he said he had a lot on his mind that week. There were some managerial entanglements that needed to be smoothed out, along with tackling business management, economics, accounting, management and business law. He got Bs in all five—and he never gets Bs, he always gets As.

He was doing a business las final on his computer the night before his fight.

“That’s not an excuse for how I fought,” Ali Walsh said. “I should have performed better than I did. School has never been a problem for me. I had a lot on my mind. I have a great relationship with SugarHill, and I always will. I love the guy for everything he has done for me, and that will never change.

“I was on edge that entire week leading into that fight.”

Ali Walsh was so displeased with his performance that as soon as he returned to his hotel room, he took out his phone, found a replay of the fight and fought the fight again on the edge of the bed, moving his head, throwing punches in the air, ducking the punches coming at him on the phone.

“It killed me, and I’ve watched that fight six or seven more times since it happened,” Ali Walsh said. “I know Richard, and I know his background is with Joe Frazier. It is amazing that kind of stuff happens in boxing.

“Richard and I communicate really well. I know he cares about me. He brings that old-school training, and that old-school spirit and style. He worked with Joe Frazier and Emanuel Steward. I get a nostalgic feeling with him, and I wasn’t even alive when they were around.”

Ali Walsh is academically ahead of schedule, graduating this summer. He was doing homework this weekend in Oklahoma.

“I feel really good, I have the peace of mind, and I am more confident,” Ali Walsh said. “I won my last fight. I wasn’t at my best and I still won, and I learned a lot from it. I gained a lot from it. The experience from my last fight makes me like this is my 10th fight. I’m glad it happened. No wants to skate by a fight like that, and because I did, I don’t ever want to go through that again.”