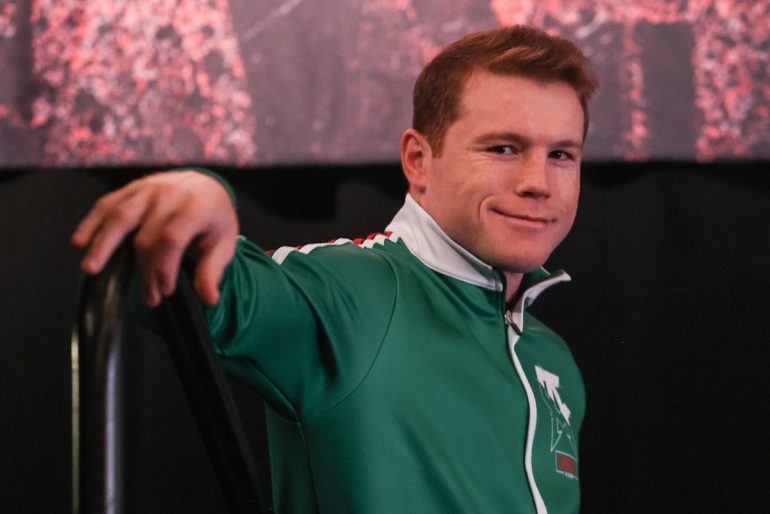 As a free agent, pound-for-pound king Canelo Alvarez has been the target of all kinds of offers from boxing’s top players, and 2022 will not be the exception.

A recent report by ESPN’s Mike Coppinger suggests that Alvarez is currently weighing two different scenarios for his 2022 schedule, with a one-fight deal being offered by Al Haymon’s Premier Boxing Champions outfit and a two-fight proposition on the table by Eddie Hearn’s Matchroom Boxing.

According to Coppinger, the PBC deal involves an already discussed May 7 bout against middleweight titlist Jermall Charlo, who would jump up to super middleweight to face Canelo for all the marbles in that division, including his Ring magazine championship belt.

Coming in on line 2 on the old Canelo intercom there is a blinking red light behind which the Matchroom big wigs are holding for an answer on their own proposal: a mouth-watering two-fight offer involving a Canelo-Dmitry Bivol light heavyweight clash on May 7 followed by the third installment of Canelo´s heated rivalry with Gennadiy Golovkin in the other big Mexican holiday weekend in mid-September.

The 31-year-old Alvarez (57-1-2, 39 KOs) has become known for dragging his decision-making process well beyond reasonable deadlines. The current deadline looming for him is the no-less-than 3-month period required to properly promote a fight of the magnitude of a blockbuster pay-per-view. With May 7 as the proposed fight date, that deadline is fast approaching.

Still up in Canelo’s sleeve, however, is a potential cruiserweight title bout against WBC kingpin Ilunga Makabu, who is schedule to defend his now uber valuable trinket against Thabiso Mchuno on Saturday, January 30.

With millions on the table and the main source of income for some of the biggest companies in the boxing industry on the line, Canelo is obviously fully concentrated in the most pressing issue for him at the moment: playing golf.

If the offers are real, there will be plenty of invitations for a martini in the clubhouse once his day on the green is over.