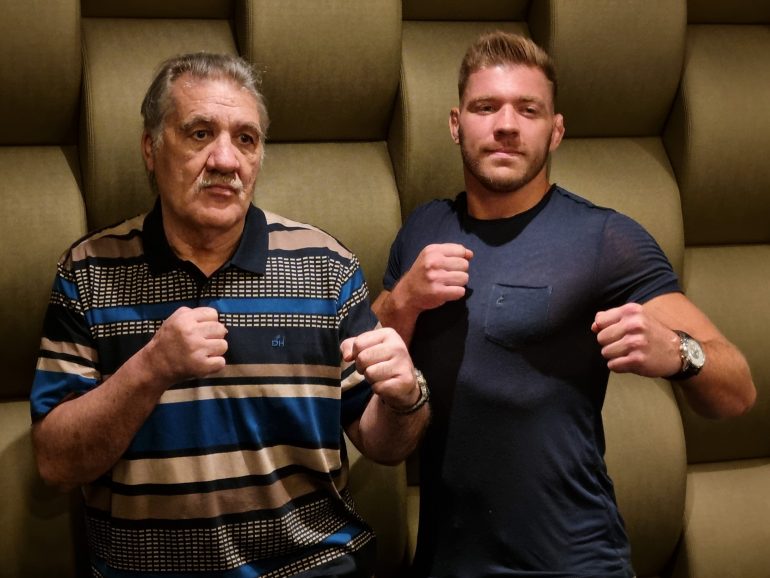 “Against all Odds,” a movie on the life and times of former WBA heavyweight titlist Gerrie Coetzee, is ready to roll, it was announced at a well-attended press conference at the Radisson Blu Hotel in Cape Town, South Africa, on Wednesday afternoon.
Filming is set to start in South Africa over the following months, and it will then move to Washington DC and wrap up at the Richmond Coliseum in Ohio. That is, of course, the venue where Coetzee had his greatest victory, knocking out Michael Dokes in ten rounds to win the WBA world title in September of 1983. The bout was named The Ring’s “Upset of the Year” and was Coetzee’s third attempt at the crown, having failed in two previous attempts against John Tate and Mike Weaver.
Coetzee, accompanied by his wife, Rina, was in a jovial mood as he recounted his greatest night. “I was at my very best for Dokes. No one would have beaten me on that night.” When asked by the writer what made the difference in his third attempt, Coetzee puts it down to training. “I overtrained for Tate and Weaver. My South African trainers made me run twice a day; morning and afternoon.” He goes on to give a detailed explanation of a draconian running schedule that included him pacing his trainer’s car at a set speed for several miles. “By the time I got into the ring for those fights, I was half spent, and it got me in the later rounds. For Dokes, I trained with Jackie McCoy in the States. I showed him my running schedule (Coetzee had it all written down in a notebook) and he immediately said, ‘This is too much.’ My training schedule was completely different, and it worked.” 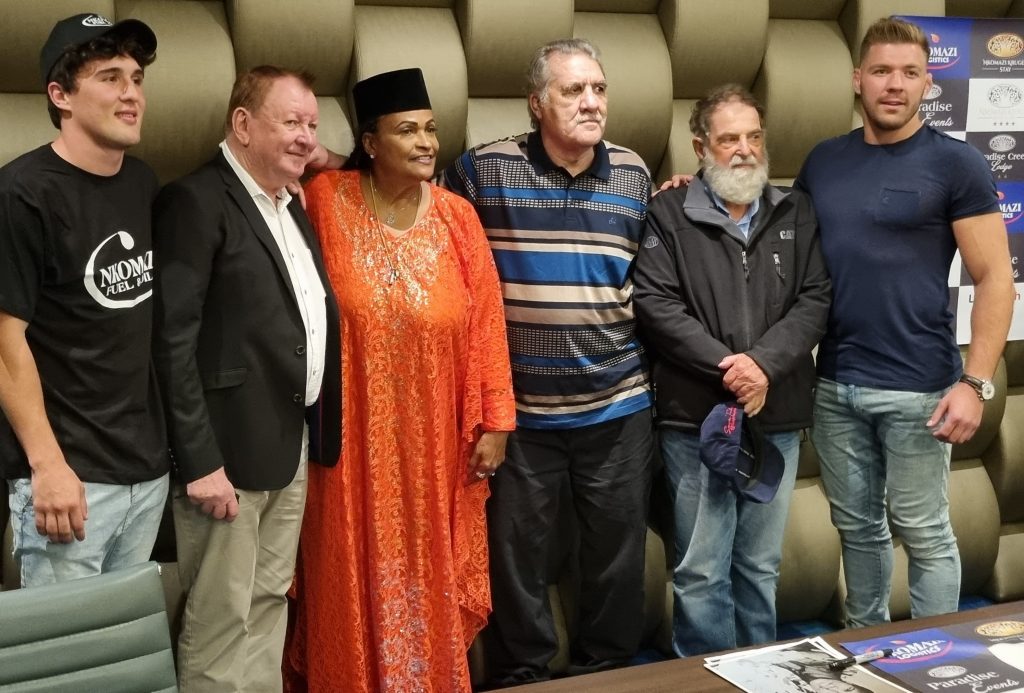 Coetzee is a throwback to a Golden Age of South African boxing, where the sport was second to only soccer in popularity. A recorded 83,000 attended his maiden challenge against John Tate. There were even more in reality, as security lost control of the throngs of people outside the stadium who simply gate crashed.
Coetzee was more than just a fighter though. He lived through a tumultuous era at the height of Apartheid and director, Koos Roets, captured the gist of it well: “This is more than just a boxing story. It is a great human-interest story. Gerrie always had three opponents. There was his opponent in the ring. Then there were his hands. He suffered fractures in over 60 percent of his fights. And then there was the sporting boycott. Everywhere they went (he was often accompanied by his wife, parents, as well as his dog at the time, a Cocker Spaniel named Wendy) there were protests, insults hurled at them and even bottles thrown and attempted attacks by ringsiders. For one fight they even had to sneak him into the venue in the back of a fish delivery truck!”
At the time South Africa was, quite understandably, reviled for its Apartheid policies. However, Gerrie Coetzee the private individual, somewhat like Max Schmeling at the time of his rematch with Joe Louis, was a lot different than what the world expected from a white South African.
“Few people know that he adopted a black kid,” narrates producer Kenddrie Utuk of Hartquist Productions. “This boy pitched up on his doorstep one day and when Gerrie asked him what he wanted, he told him that his parents had died. His father apparently told him that if anything should go wrong, he should go look for Gerrie Coetzee (to train him). Coetzee invited him into his home and when the police got wind of it, he was told, ‘Either the boy goes or you adopt him,’ to which Coetzee replied, ‘Send those papers.’”
“They (the police) were so full of it,” Coetzee explained. “They came to my house and wanted to know, ‘Where does he stay? Where does he eat?’ and so on. Then they wanted to know where he sleeps. By that time, I was starting to lose it and I took them to my bedroom, pointed to the bed and said, ‘There, he sleeps in our bed between myself and my wife.’ Of course, it wasn’t true, he had his own room with its own bathroom, but that finally got rid of them after they threatened me to go to the papers. I called my lawyer and he told me not to worry, let them run the story. They will be the ones who will look like fools.”
Like so many, Coetzee has a fondness for Muhammad Ali. Ali’s second wife, Dr Khalilah (formerly Belinda) Camacho Ali, who incidentally also has a book entitled, “The Forgiveness,” on her life with Ali out later this year, was in attendance as a guest of honor. “Ali was a tremendous fighter inside the ring,” said Coetzee, “but where he was really ‘The Greatest’ was outside the ring. He had a way with people. He could make you feel great or make you feel terrible in an instant. I was in Las Vegas and got invited to his hotel room. I stood there and then he came into the room. He held up his hand and said, ‘Hit my hand.’ I knew he was going to do some sort of trick and when I hit his hand, he pulled it away and said, ‘No, you’re too slow to be a boxer,’” laughs Coetzee. “You box, son? What do you box? Apples? Oranges? Bananas?” interjected the former Mrs Ali, doing a stellar imitation of her late husband. “Yeah, that was him,” Coetzee acknowledged with a smile.
Then, the million-dollar question on everybody’s mind: Who will get to play Coetzee? The lead will be played by South African UFC star, Dricus du Plessis. “It was very unexpected, this project, but I am very honored to do it. I am in MMA, but boxing is also a combat sport that I very much respect. Coetzee is an icon in South Africa, and it will be a privilege to play him,” said Du Plessis. “I looked at one of his fights and thought, ‘Yeah, this kid could play me,’” Coetzee continued. “In the movies you are not supposed to hit each other hard but sometimes they hit you a little harder than is necessary. Here is a young guy who can put them in their place,” winked the former champ.
As the film industry people started thinning out, the writer finally got the chance to talk some more about boxing with Coetzee. He shows me his hands and makes two fists next to each other on the table. His famous “Bionic Right” that had several steel pins inserted, is distended and larger than the already sizable left fist. It is a slammer that will make Hellboy proud!
Who was his best opponent? “It is hard to say. Mike Weaver was very strong. I would say he was the hardest puncher. John Tate couldn’t really hit, but he was a wonderful boxer.”
That was all I could get on the day as Coetzee, who is recovering from leg surgery, eventually left with wife, Rina, daughter and two grandsons in tow. One of those grandsons, Dillion Coetzee, is due to make his pro debut as a light heavyweight.
Let us hope that the movie will do the story of Gerrie Coetzee justice. He certainly lived in interesting, if not harrowing times.
As for Dricus du Plessis, he had better start growing that mustache!
The press conference was hosted by Thinus Strydom of World Sports Promotions, Kenddrie Utuk of Hartquist Productions and journalist Herman Gibbs.