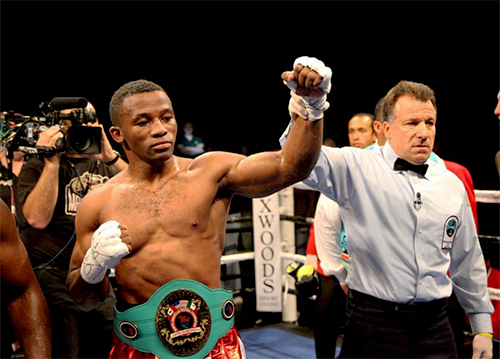 Mchunu, who is rated No. 4 by The Ring at 200 pounds, is looking forward to facing his old rival for a second time.

“I think it a fantastic opportunity,” Mchunu (23-5, 13 knockouts) told The Ring. “[I’m] very happy to [have the chance to] avenge my loss and become world champion.”

The 33-year-old South African lost to Makabu in May 2015 but feels it will be different this time.

“It was a tough fight,” said Mchunu, who spent nine days in Mexico City, while waiting on confirmation of his visa to enter America. “Because he was so easy to hit, I went for the KO and made it hard for myself down the stretch.

“I need to be disciplined throughout. If I use my boxing skills – I know I’m the better boxer which can lead me to victory this time around.”

There is the added incentive of a potential fight with pound-for-pound king, Canelo Alvarez, who stated before Christmas, that he may jump cruiserweight in search of another world title.

“It’s quite interesting,” he admitted. “Let’s see what happens. If that’s the route Canelo chooses it will be great, I will be ready for him.”Mchunu’s manager, trainer, Sean Smith is happy to finally get the fight over the line after months of arduous talks.

“I’m pleased to be in this position again,” said Smith. “It’s for the big one – The WBC cruiserweight world championship.

“We know what to expect this time. Both fighters have bounced bag from major disappointments and I’m happy we have the opportunity to set the record straight and explore the world of opportunity beyond this should we be successful.”

Makabu worked his way through the ranks, scoring impressive wins over Eric Fields (KO 5), Glen Johnson (TKO 9) and Mchunu (KO 11) to earn a shot at the vacant WBC title in May 2016. But although he dropped Tony Bellew in the opening round, Makabu let things slip and was stopped in three rounds.

The 34-year-old responded by winning seven fights, including two in Russia over Kudryashov (TKO 5) and Alexsei Papin (MD 12). Those triumphs saw him rewarded with a second title opportunity, and this time Makabu edged past Michal Cieslak (UD 12) to capture the WBC title. The Congolese-born power-puncher has since defended his title against Olanrewaju Durodola (TKO 7) to take his record to (28-2, 25 KOs)

The Pay-Per-View event which will also feature Trevor Bryan vs. Jonathan Guidry in a heavyweight special attraction is available on Donking.com, DKPBoxing.com or itube247.com for $49.99 beginning at 6 p.m. ET/ 3 p.m. PT