Amir Khan vs. Kell Brook is finally on, February 19 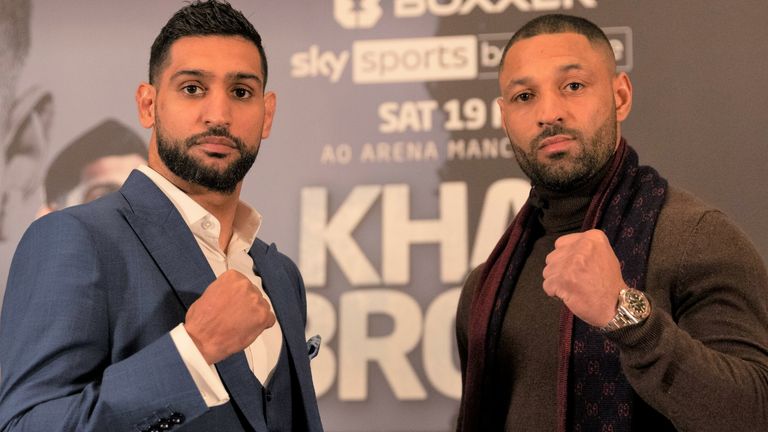 The decade-long rivalry between Amir Khan and Kell Brook will finally result in punches being thrown.

The British superstars will go head-to-head in a 149-pound catchweight battle Saturday, February 19, at AO Arena in Manchester, England. 20,000 fans are expected to attend the fight, which sold out within 10 minutes when tickets went on sale in December.

It was also announced Tuesday afternoon that Khan vs. Brook and select undercard contests would stream live and exclusively in the United States on ESPN+.

“I think Kell Brook is very bitter and this is a good time for me to put the issue straight between us because he has always thought he is the better fighter than me,” Khan told Sky Sports. “He’s always said he should have had the recognition that I had and believes that should have been him but, at the end of the day, my skills made me the name I am today.”

Brook added, “This is a real grudge match. There’s no love lost in this fight and we both don’t like each other. The fans and the pundits can’t split us and that shows how even this fight is going to be.”

The 35-year-old Khan (34-5, 21 knockouts), from Bolton, England, who captured an Olympic silver medal at the 2004 Games in Athens when he was just 17 years old, has built a reputation throughout his professional career for being willing to face anyone. He unified titles at 140 pounds and fought myriad top fighters, including Marcos Maidana, Danny Garcia, Lamont Peterson, Zab Judah and Paulie Malignaggi.

Although he failed to win a major title at welterweight, Khan still picked up impressive victories over former titlists Luis Collazo and Devon Alexander before a courageous attempt to challenge then-The Ring middleweight champion and WBC middleweight titlist Canelo Alvarez in May 2016. Although he arguably was ahead on points entering the sixth round, the Mexican had begun timing Khan to the body, which gave the impression that it was only a matter of time. Indeed it was, as Alvarez flattened him with a right hand to secure a sixth-round knockout.

Khan is coming off a fourth-round stoppage of Billy Dib in July 2019. In the fight prior, he was stopped by reigning WBO welterweight beltholder Terence Crawford in Round 6.

Brook (39-3, 27 KOs), 35, of Sheffield, England, made three successful defenses of the IBF 147-pound title he snagged from Shawn Porter in August 2014. Like Khan, he also embarked on an adventure to middleweight, in September of 2016, that ended in a brutal loss when he challenged then-unified 160-pound titlist Gennadiy Golovkin, who fractured Brook’s right eye socket in the second round en route to a fifth-round TKO. Brook has arguably never been the same since. He subsequently lost his welterweight title to Errol Spence Jr. via 11th-round knockout the following May.

After winning his next three fights at junior middleweight, Brook accepted an offer to return to 147 pounds to face the aforementioned Crawford in November of 2020. While he was leading on two of three scorecards, Crawford wiped out Brook in the fourth round.