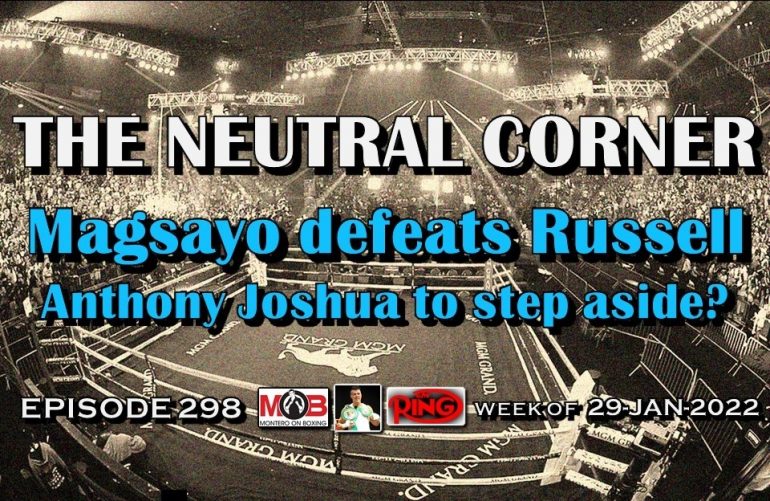 On episode 298 of The Neutral Corner boxing podcast, host Michael Montero gave his thoughts on rumors of a step-aside deal being worked out to make way for a full heavyweight unification.

According to a report from The Telegraph, an unprecedented step-aside fee is being negotiated for former unified titleholder Anthony Joshua, who is currently slated to face Oleksandr Usyk again this spring. If AJ were to accept the fee (rumored to be at over $20M), it would make way for a fight between Usyk and Tyson Fury.

Montero urged TNC listeners to take caution with these premature reports, as nothing has been confirmed at this point.

On Saturday, January 22 in Atlantic City, New Jersey, Mark Magsayo scored an upset majority decision win over Gary Russell Jr. Most fans and media felt Magsayo clearly won the featherweight title belt, and that the judges should have rendered a unanimous decision. Either way, Magsayo (24-0, 16 knockouts) took Russell’s featherweight title back home to his native Philippines.

Russell claimed that he entered the bout injured. In fact, he said that his right shoulder has been compromised since he fought in the 2008 Beijing Olympics. The Russell vs Magsayo fight headlined a PBC card on Showtime.

“If it were up to the WBA, we wouldn’t have seen the Kansas City Chiefs versus the Buffalo Bills NFL playoff game last night,” said Thad. “It would have been the Detroit Lions versus the Jacksonville Jaguars. That’s the way these people mandate fights.”

“I thought that Sakaria Lukas got robbed against King Tug,” said Nacho. “He should have been credited with that knockdown that referee Eddie Claudio screwed up. You could clearly see the Lukas hit Nyambayar with a shot on the jaw and he went down.”

“It seems like every two or three months, we get a fight like Russell versus Magsayo, where it’s close or controversial, and people on social media have all kinds of crazy takes,” said Chad. “Obviously Magsayo won. The idea that some people think it should have been a draw is just crazy to me. Four rounds for [Russell] would have been a gift.”

“I think Subriel Matias is very game,” said Carlos. “I feel like he would be in very good fights against the top of the 140-pound division, whether it be Josh Taylor, Jose Ramirez or Regis Prograis.”