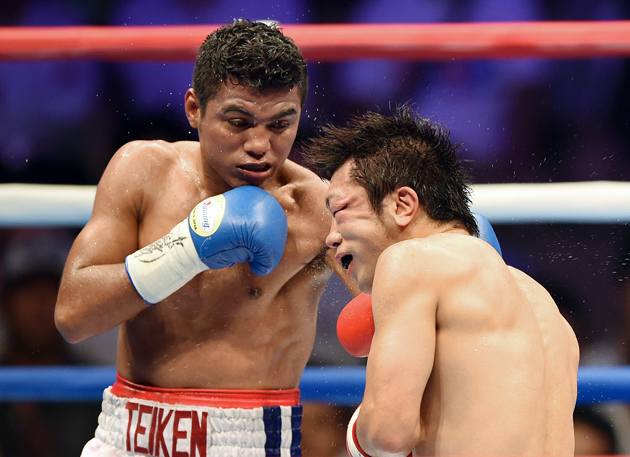 One of seven losses came courtesy of Chocolatito. Zero shame in that fact.
25
Jan
by Ryan Songalia

The fight will take place on March 5 at the Pechanga Arena in San Diego, and will be broadcasted live in the United States on DAZN.

Promoter Eddie Hearn of Matchroom Boxing announced the news Tuesday afternoon, confirming rumors that had been circulating for the past week.

“Still in shock that this fight is happening but I cannot wait!,” tweeted Hearn. “Huge respect to both men for accepting the challenge.”

Martinez (18-1, 14 knockouts) is coming off a wild war with McWilliams Arroyo in November where both men went down in the first round before the bout was ruled a no contest in round 3 due to an accidental headbutt.

The 26-year-old from Mexico City, Mexico has defended the WBC flyweight title four times since winning the belt with a ninth round stoppage of Cristofer Rosales in December of 2019.

Gonzalez (50-3, 41 KOs) is in the later stages of a Hall of Fame career, having won world titles at every weight from 105 to 115 pounds. The 34-year-old from Managua, Nicaragua is enjoying a late career renaissance after he dominating Kal Yafai in February of 2020 to win the WBA junior bantamweight title.

Gonzalez is coming off a split decision loss to Estrada that many felt he deserved to win. The loss was a rematch of their 2012 bout, which Gonzalez won by unanimous decision, and a third bout was expected to be the rivalry’s tie-breaker.