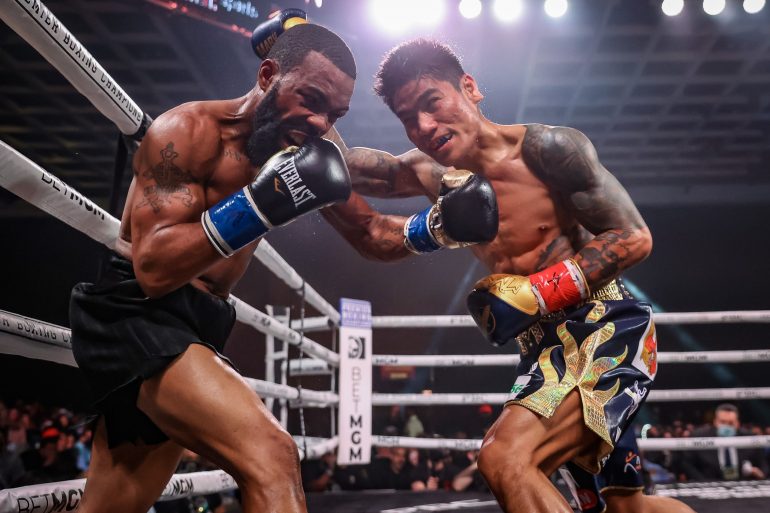 “This is my dream. My dream just came true. Ever since I was a kid, this was my dream. I’m so proud that I’m a champion now. Thank you so much to the Filipino fans for the support,” said Magsayo, who was a 4-to-1 betting underdog with some outlets.

Magsayo, a protege of Manny Pacquiao from Tagbilaran City, Philippines, appeared much bigger than Russell, a crafty southpaw from Capitol Heights, Md. Magsayo got off to a quick start in the first two rounds, landing heavy shots to the body, which opened up bigger punches upstairs. 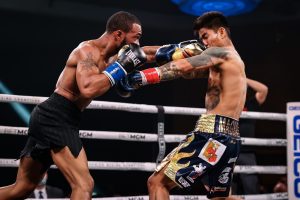 Russell was outworked by Magsayo, in part because he couldn’t use his right jab, but he operated well with his straight left. Photo by Amanda Westcott/SHOWTIME

Early in the fourth round, the injury Russell had hinted at before the bout manifested itself in the fourth, when a right jab from Russell caused him to wince in pain and go into a defensive shell. Russell did not throw a single jab after the fifth, but the slick Russell fought competently with just his left, landing counters seemingly at will.

Russell didn’t have the power to hurt Magsayo, but his ability to land accurately began to frustrate Magsayo. The fight appeared to be narrowing even, before Magsayo returned to fighting more disciplined, feinting to get inside and using body punches to open up Russell upstairs.

Magsayo dominated the eleventh, as Russell reverted to a defense first shell, and seemed to outhustle Russell towards the final bell.

Russell, 33, said afterwards that he believes he injured a tendon in his right shoulder about two weeks, but says he refused to withdraw from the bout. Russell also had to contend with his father/trainer Gary Sr. being limited in his appearances at the gym during training camp after having one of his feet amputated due to complications from diabetes.

Russell said the injury was an old one that he had suffered prior to the 2008 Olympics, but had never been surgically repaired. He vowed to return after his shoulder is healed, and says he will pursue a rematch. Russell believes that he got the better of the action, and should have retained his belt.

Pacquiao, who promotes Magsayo, congratulated his fighter on Twitter afterwards. “Thank you for bringing honor to our country by becoming the latest Filipino world boxing champion. Welcome to the club,” said Pacquiao, an eight division world champion.

MP Promotions President tells The Ring that Magsayo will likely make a voluntary defense in June or July, while a mandatory defense against former WBC junior featherweight titleholder Rey Vargas (35-0, 22 KOs) lingers on the horizon.