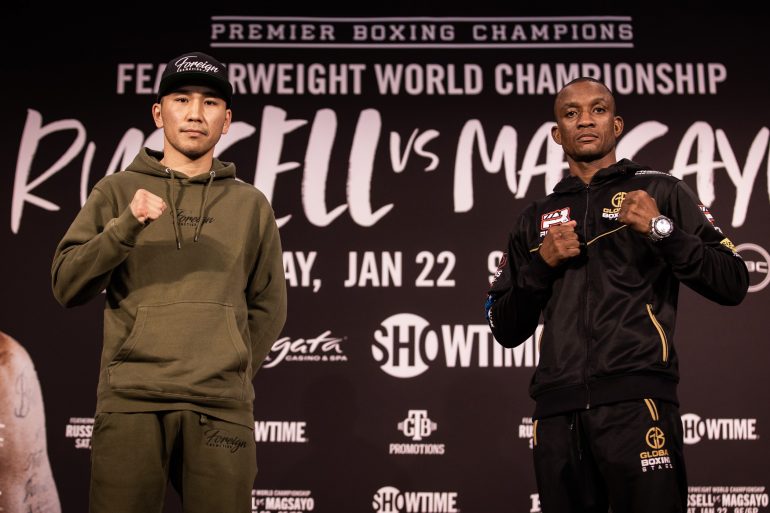 ATLANTIC CITY, N.J. — Sakaria Lukas stepped in to the opening bout of a Showtime Championship Boxing card, replacing the COVID-compromised Vic Pasillas in a ten-round featherweight bout against former title challenger Tugstsogt Nyambayar on less than a week’s notice.

After ten rounds, many felt the Namibian underdog had done enough to earn the win. One scored the bout in his favor, 96-94, while the second had the same score, but for the 2012 Olympic silver medalist from Mongolia, and the third had it even at 95-95, rendering the bout a split decision.

The result came down to one flaw from respected referee Eddie Claudio, who ruled a clear knockdown in round 8 by Lukas a slip. Had he gotten the call correctly, the resulting 10-8 round would have earned Lukas a split decision win.

Claudio, when confronted by Showtime interviewer Jim Gray with video replays from multiple angles, claimed not to see the left jab that landed flush on Nyambayar and put him down on the canvas.

“I didn’t see a shot,” said Claudio, before adding “in real time.” Asked to clarify if he saw it on the replay, Claudio said “On the replay I didn’t see him get hit.”

The draw puts into question the future of Nyambayar (12-2-1, 9 KOs), who was seeking to get back into contention following losses to Gary Russell Jr. and Chris Colbert in his last three bouts.

“I thought I won the fight and I didn’t believe it was a knockdown. It was a hard fight, especially against an opponent on short notice. My goal is to fight for the world title again,” said the 29-year-old Nyambayar, who is now based out of Los Angeles.

Despite not emerging with the victory, the 37-year-old Lukas (25-1-1, 17 KOs) raised his stock, impressing observers in his first bout on U.S. soil since his unanimous decision loss to Isaac Avelar in December of 2020.

“Everyone saw it was a knockdown that should have given me a split decision win. I fought my heart out and I deserved the win,” said Lukas.

Nyambayar made the first statement of the fight midway through the opening round, when he slipped a Lukas jab and countered with a left hook which had him momentarily wobbly. Lukas rebounded with a strong second, and began landing power punches in the third which were set up off of his consistent jab.

Nyambayar seized back control in round five, opening the stanza with a flurry that was highlighted by an uppercut that knocked Lukas’ head back. Another uppercut later in the round wobbled Lukas, but the Namibian didn’t come to Atlantic City just to lay down. He opened the sixth with back to back right hands which Nyambayar absorbed well.

Lukas took firm control in round 8, rocking Nyambayar with an overhand right before dropping him with a short jab inside that Nyambayar coming in.

The bout opened up a tripleheader broadcast that is headlined by Gary Russell Jr. making the sixth defense of his WBC featherweight title against mandatory challenger Mark Magsayo.