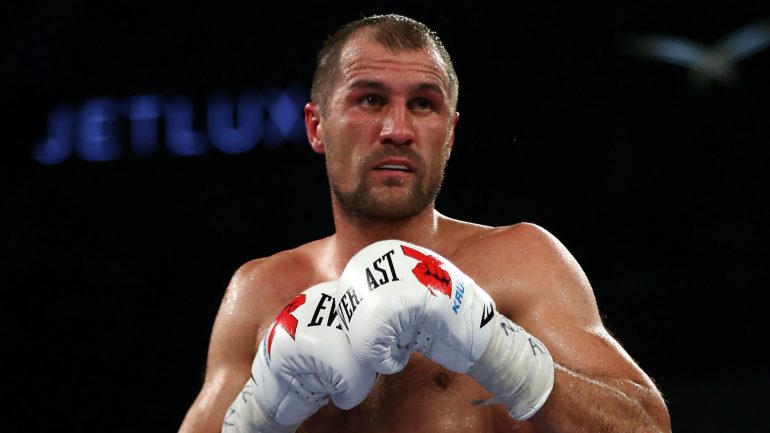 When Sergey Kovalev released training footage last week, the initial reaction was that he looked bigger than usual.There’s a reason behind it.Kovalev is set to make his cruiserweight debut — sort of.Russia’s Kovalev (34-4-1, 29 KOs), a former light heavyweight champion, and China’s Meng Fanlong (17-0, 10 KOs), a light heavyweight contender, have agreed to meet at a catchweight initially reported at 185 pounds and later confirmed at 188. The cruiserweight limit is 200 pounds.ESPN was first to report the story.The 38-year-old Kovalev hasn’t boxed since the sport’s biggest star, Canelo Alvarez, knocked him out cold in the 11th round of their WBO 175-pound title fight in November 2019 in Las Vegas. The fight was a close, tactical affair leading up to the knockout. But this was followed by a lull in his career in which he can only blame himself.Last January, Kovalev was slated to fight then-undefeated Bektemir Melikuziev (8-1, 6 KOs) in a DAZN main event. However, he was removed from the fight after testing positive for synthetic testosterone, a banned substance, in a random drug test conducted by the Voluntary Anti-Doping Association.That eventually led to a contractual dispute between Kovalev and Golden Boy Promotions. As part of the deal to fight Alvarez, the company agreed to pay him $2.5 million for a comeback fight. An arbitrator could rule on the matter as early as March.His life outside the sport has also been tumultuous. Three months after losing to Alvarez, Kovalev was arrested for driving under the influence of alcohol in Los Angeles. His problems didn’t end there or start there, either. In October 2020, Kovalev pled guilty to allegations he became violent with a woman who rebuffed his sexual advances and kicked her dog. However, he cut a deal with prosecutors to avoid jail time and instead was convicted of misdemeanor charges and sentenced to three years probation.During his prime, Kovalev was one of the most dominant fighters in boxing, albeit his reign was short-lived, but memorable. After knocking out Nathan Cleverly to win the WBO title in August 2017, he made three defenses before taking on the all-time great Bernard Hopkins in a three-belt unification showdown in November 2014. He dropped the legendary fighter in the opening round and easily outpointed him to take the belts. Four defenses later, he lost his titles to Andre Ward via controversial decision before Ward stopped him in a subsequent rematch.Fanlong, a 33-year-old southpaw from the prefectural-level municipality of Chifeng in China, will finally get his first significant test. COVID-19 cost him an IBF mandatory shot at undefeated IBF/WBC champion Artur Beterbiev in March 2020. The fight was rescheduled for October. However, when Fanlong could not secure a travel visa to Russia, he was replaced by Germany’s Adam Deines, who lost a 12-round IBF elimination match to Fanlong by unanimous decision in June 2019. Beterbiev (17-0, 17 KOs) scored a 10th-round knockout of Deines last March in Moscow.

The Ring contributor Francisco Salazar collaborated in this report.