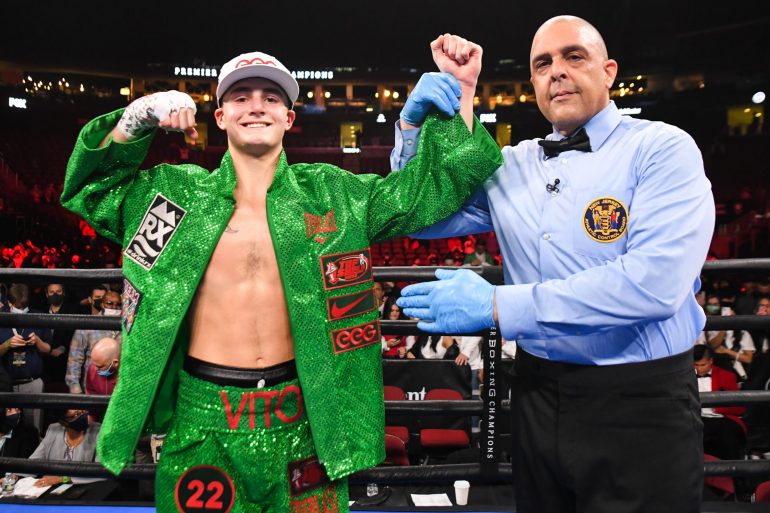 The way Vito Mielnicki, Jr. views it, what happened in the third round of his Christmas Day victory over Nicholas DeLomba could have been worse—far worse.

The talented 19-year-old welterweight looked in the best shape of his life, and for the opening three rounds, fought his best in his young career. Then something occurred on the way to going 10 rounds for the first time in stopping DeLomba at 1:49 on the FOX PBC Fight Night telecast from the Prudential Center in Newark, New Jersey.

Mielnicki (10-1, 7 knockouts) felt a warm sensation through his right arm and felt what he thought was a tear. That’s exactly what it was—a tear in his right biceps as he was pounding DeLomba (16-4, 5 KOs) in the third. Mielnicki’s corner iced his right arm between rounds, until it began to numb.

Mielnicki basically fought the following seven rounds with one arm. An MRI later confirmed he had a tear, and a week later he found out that the injury does not need surgery. What he thought was the worst, missing six to eight months due to surgery and rehab, has now been reduced to six weeks of recovery.

“It’s why I was using my jab so much (in the DeLomba) fight,” Mielnicki said. “I think I definitely displayed something in that fight that not many saw before, using my legs and using my jab. I thought I could have had a higher work rate, but I know now why I couldn’t.

“My arm was an issue, but I learned how to block out the pain. If I didn’t smother (DeLomba) as much, I don’t think I would have hurt my arm. I can’t wait to get back to the gym. In a week after the fight, the swelling went down, and I felt good. I just have to watch myself in the weeks ahead.”

The injury could not have come at a worse time. Mielnicki treated himself to a great Christmas present—a white Porsche SUV with a cool red interior.

“It’s really one of the first things I bought since I turned pro, and it was a Christmas gift besides winning the fight,” Mielnicki said. “I got it at a Porsche dealership near me. It’s a nice little comfy car. I’m going to get the wheels dipped.

“I’m just going to have to drive it with my left hand for the time being.”

“The doctors said I have a time frame of six weeks and I’m back in the gym, and I can’t wait,” Mielnicki said. “If this required surgery, it would have taken six to eight months I was told. The swelling has gone down a lot more since it happened. I’m loose and ready to go.”

The aim for Mielnicki is to begin training again in early March and possibly be back fighting again by the spring.

“Knowing what held me back on Christmas, and knowing I could have done even better, that’s motivation,” Mielnicki said. “I went 10 rounds for the first time in my career, and it’s the best my jab looked. DeLomba told me after the fight that he wanted to do more, but my jab kept him at a distance.

“There were things I liked in the DeLomba fight watching it over again, and there were a lot that I still need to work on. But, hey, I did win.”

Using one arm for seven rounds.