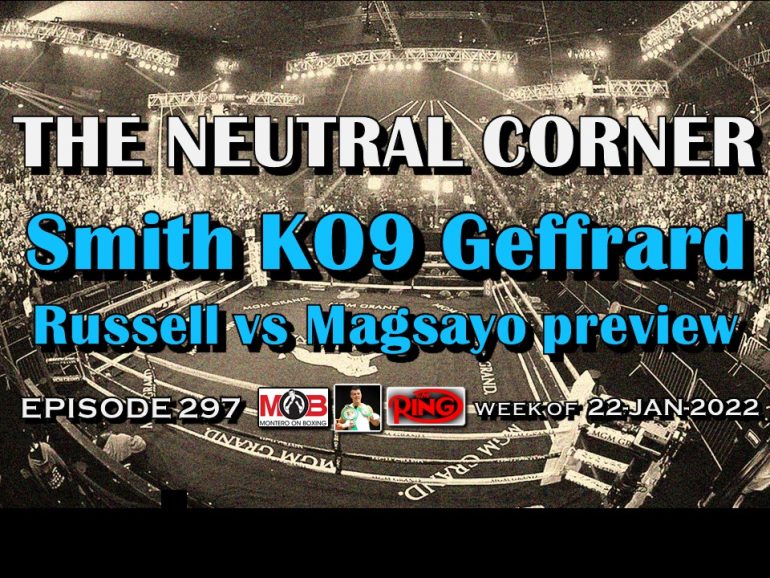 On episode 297 of The Neutral Corner boxing podcast, host Michael Montero caught up on the upcoming fight news.

According to reports, Jessie Vargas tested positive for COVID and his bout with Liam Smith, which was scheduled for February 5 in Phoenix, has been postponed. But a highly-anticipated rematch between Srisaket Sor Rungvisai and Carlos Caudras was signed to take the spot. Same date, same city.

Also, an interesting super middleweight fight between Daniel Jacobs and John Ryder is set for February 12 in the UK. And a super fight between Katie Taylor and Amanda Serrano is nearly done for late April in New York, according to promoter Eddie Hearn.

“If Crawford doesn’t end up getting the fight with Spence, can he pivot back to a Josh Taylor fight, or is that dead because of the lawsuit?” asked Andrew. “That’s a fight that I’d really love to see, I think it’s better than the Spence fight. I believe Crawford and Taylor are two of the top five fighters in the world.”

“I liked the fact that Abraham Nova came to the ring with his own cheerleaders and his own mascot,” said Nacho. “That was kind of cool; you don’t see that too much in boxing. That’s a good way of promoting yourself as a fighter when people don’t really know who you are.”

Michael Montero can be found on social media via @MonteroOnBoxing. His show “The Neutral Corner” can be seen every Monday on TheRingDigital YouTube channel, and heard on audio podcast platforms around the world.v