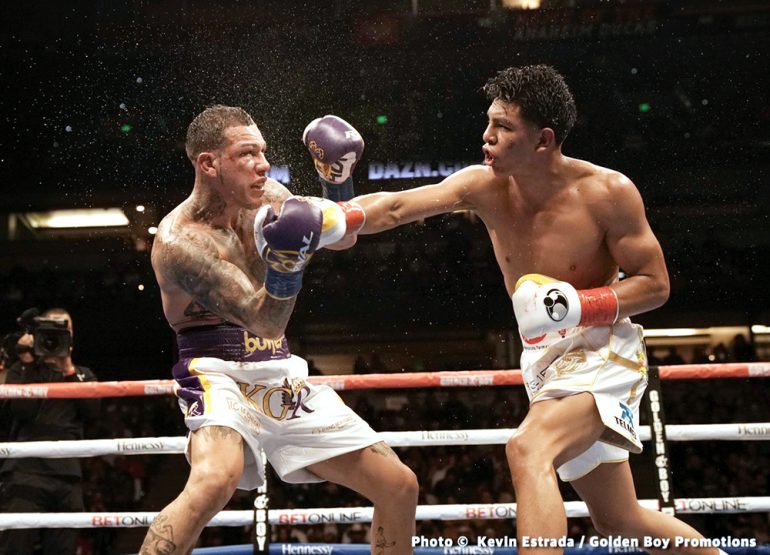 LOS ANGELES, CA (January 12, 2022) – The pride of Tijuana, Jaime Munguia (38-0, 30 KOs), will make a grand homecoming when he faces undefeated middleweight contender D’Mitrius “Big Meech” Ballard (21-0-1, 13 KOs) in a 12-round fight for Munguia’s WBO Intercontinental Middleweight title. The fighters were originally slated to face each other in 2021, but the fight was postponed due to an injury Ballard sustained during training camp. Now the rescheduled fight will be a winner-takes-all event set to take place in the iconic Plaza Monumental de Playas de Tijuana in Tijuana, Mexico, on Saturday, February 19, and will stream live exclusively on DAZN worldwide, excluding Mexico.

“Ballard is a good, hungry fighter who will try to keep his undefeated status,” said Jaime Munguia. “He is going to be a dangerous rival, but I won’t let him come take what’s mine. I respect him, just like all my rivals, but I will be prepared to protect my belt and my reputation.”

“I am blessed to have this opportunity to prove I have what it takes to be among the elite in the middleweight division,” said D’Mitrus Ballard. “I believe our styles will make for a great and entertaining night of boxing. Scared money, don’t make no money!!”

“This is a winner-takes-all, high-stakes fight for both Munguia and Ballard,” said Oscar De La Hoya, Chairman, and CEO of Golden Boy. “Ballard has been waiting for an opportunity like this to prove he has what it takes to become a serious contender in the middleweight division. He will come with everything he’s got to ensure a victory on February 19. Munguia will need to step up to ensure his title and undefeated record are not taken away from him. He will have to come in full defense mode to protect what is his. Both fighters have a lot to lose here, and this fight will prove to be an exciting, winner-takes-all event for fight fans.”

“We are very excited about the return of Jaime Munguia to the city where he was born,” said Fernando Beltran, CEO, Zanfer Boxing. “We believe that Ballard will not be easy at all, he is a complicated rival, but we are sure that Munguia will come out with his hand up in victory and give a great night of boxing to all his fans in Tijuana”

Having been away for more than four years, former world champion and undefeated fighter Jaime Munguia is eager to return to Tijuana and show off all he has accomplished in a grand homecoming event at the Plaza Monumental de Playas de Tijuana. One of the most exciting fighters to come out of Tijuana, Mexico, and currently ranked fifth worldwide in the middleweight division, Munguia is a skilled fighter who most recently proved to be among the elites in the middleweight division in a fantastic outing against ‘King’ Gabriel Rosado in Nov. 2021. Already having claimed a world title at 154lbs., Munguia is ready to take on another challenge by facing D’Mitrius Ballard at 160lbs. to kick-off 2022.

After a minor setback in early 2021 due to an injury, D’Mitrus Ballard is ready to start 2022 in a major battle to prove he deserves a spot among the elite of the middleweight division. A native of Temple Hills, Maryland, the undefeated 28-year-old boasts a decorated amateur career and has faced tough competition like Victor “Sina” Fonseca, Alan “Amenaza” Campa, and Olympic bronze medalist Yamaguchi Falcao. Ballard was last seen in the ring fighting against Paul Valenzuela Jr. in November 2021, winning the fight unanimously.