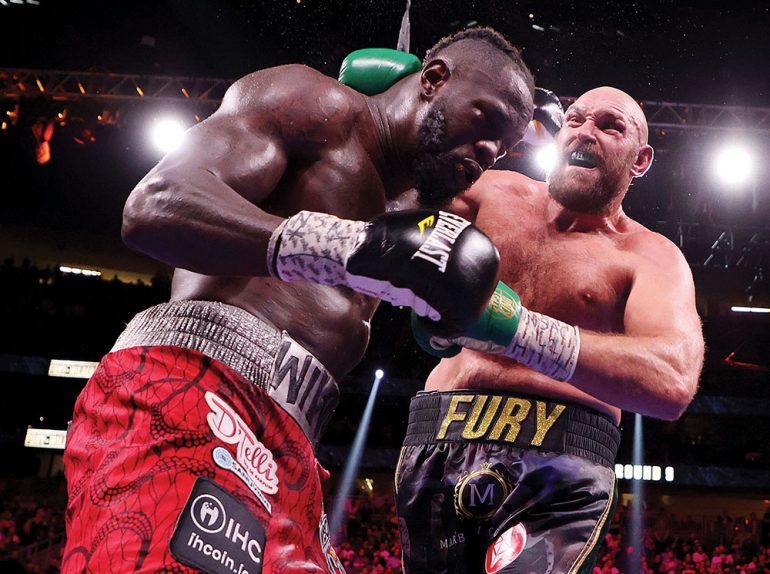 Tyson Fury is the king of two empires. As The Ring Magazine heavyweight champion, he can lay claim to being considered the best in his division. However there also isn’t a single man who can out-trash-talk the Manchester native.

Fury, who also holds the WBC heavyweight title, unleashed on divisional rivals Oleksandr Usyk and Anthony Joshua during a treadmill workout early Tuesday. An animated Fury first aimed at Joshua, who dropped his three belts to the southpaw Usyk last September in London.

“You know what I can’t believe? That [Anthony Joshua] has gone and [given] Ukraine all the heavyweight belts back after all my hard work in [retrieving] them,” Fury said in an Instagram story. “You big useless dosser!”

The 33-year-old Fury (31-0-1, 22 knockouts), who was once a four-belt (including The Ring championship)unified champion after he defeated Wladimir Klitschko in 2015, prior to his much-publicized hiatus due to drug and alcohol addiction, subsequently accused the fellow unbeaten Usyk of steroid use.

“You’ve let a little steroid man come up from middleweight and sit above you and take all your belts,” Fury said, “but it’s gonna have to take a real British Lancaster bomber like me to go and relieve the useless little stedheads of the belts and get them back to Britain. You little useless dossers!”

Usyk has never formally tested positive for any banned substance, while Fury – along with cousin Hughie – can’t say the same. The duo tested positive for nandrolone, an anabolic steroid, in 2015, after Fury scored an eighth-round stoppage over Christian Hammer in London.

Fury eventually served a backdated two-year suspension, which coincided with his aforementioned hiatus. During the height of his addiction, Fury was 398 pounds and still maintains to this day that the positive test was triggered by consuming uncastrated wild boar.

Fury is coming off an 11th-round knockout of Deontay Wilder in their heavyweight trilogy championship bout last October.

“Honestly bring ‘em to me, the ‘Gypsy King.’ Bring ‘em to me! And I will put ‘em into place. I’ll relieve ‘em of the belts again.”

Usyk (19-0, 13 KOs) and Joshua (24-2, 22 KOs), The Ring’s No. 1 and No. 2-ranked heavyweights, respectively, are expected to rematch in the spring. While Fury is also planning a spring return, it is unclear against whom. Fellow countryman Dillian Whyte is his WBC mandatory but they have not yet struck an agreement. However Tuesday revealed some positive news.

The WBC announced both teams had been allocated an extra week to finalize a deal.

A WBC statement read: “If there is no agreement between the parties, a purse bid will be held on Tuesday, January 18, at noon, in Mexico City WBC headquarters.”

THE RING AWARDS – ROUND OF THE YEAR: TYSON FURY-DEONTAY WILDER 3 (ROUND 4)