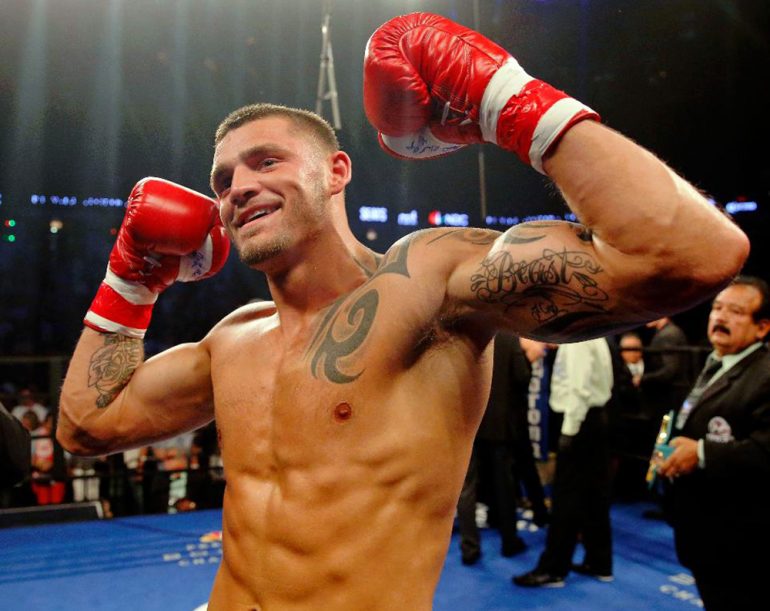 At this point, WBO light heavyweight titleholder Joe Smith Jr. figures him and his opponent might as well be placed in bubble wrap to make sure nothing happens between now and fight night.

COVID-19 has wreaked havoc on Smith’s first title defense, which is scheduled to be against late replacement Steve Geffrard in the main event of the Top Rank Boxing on ESPN card on Saturday (ESPN/ESPN Deportes/ESPN+, 10 p.m. ET) at the Turning Stone Resort Casino in Verona, New York.

Because of the coronavirus, Smith has not fought since April 10, 2021 in Tulsa, Oklahoma, where he eked out a majority decision in an action-packed battle against Maxim Vlasov to claim the vacant 175-pound belt that Canelo Alvarez relinquished. The fight had been delayed from Feb. 13 to April because Vlasov tested positive for COVID-19 prior to the weigh-in. That was far from Smith’s last issue with COVID-19.

After Smith won the title, his first defense was scheduled to be against mandatory challenger Umar Salamov on Oct. 30 at the Hulu Theater at Madison Square Garden. But that fight was also postponed when Smith became ill with COVID-19.

The fight was rescheduled for Saturday, but Salamov’s visa issues kept him from fighting in the United States. So, while Salamov wound up getting a shot at WBA titlist Dmitry Bivol in a one-sided loss on Dec. 11 in their native Russia, Smith was instead lined up to face British banger Callum Johnson, a former world title challenger, who traded knockdowns in a fourth-round knockout loss challenging Artur Beterbiev for the IBF title in 2018.

In the view of many, a fight between Smith and Johnson was far more attractive than one against Salamov, mainly because of the performance Johnson (20-1, 14 KOs), 36, turned in against Beterbiev, a foe Smith has designs on eventually facing to unify titles. He figured he could make a good fight with Johnson and have fans and media compare his performance against Johnson to Beterbiev’s.

But last Thursday Johnson was ruled out of the bout when he tested positive for COVID-19 – the third time Smith has had a fight impacted by the coronavirus. Johnson’s diagnosis paved the way for Geffrard after Star Boxing’s Joe DeGuardia, Smith’s co-promoter, said about a dozen others turned down the fight for various reasons. 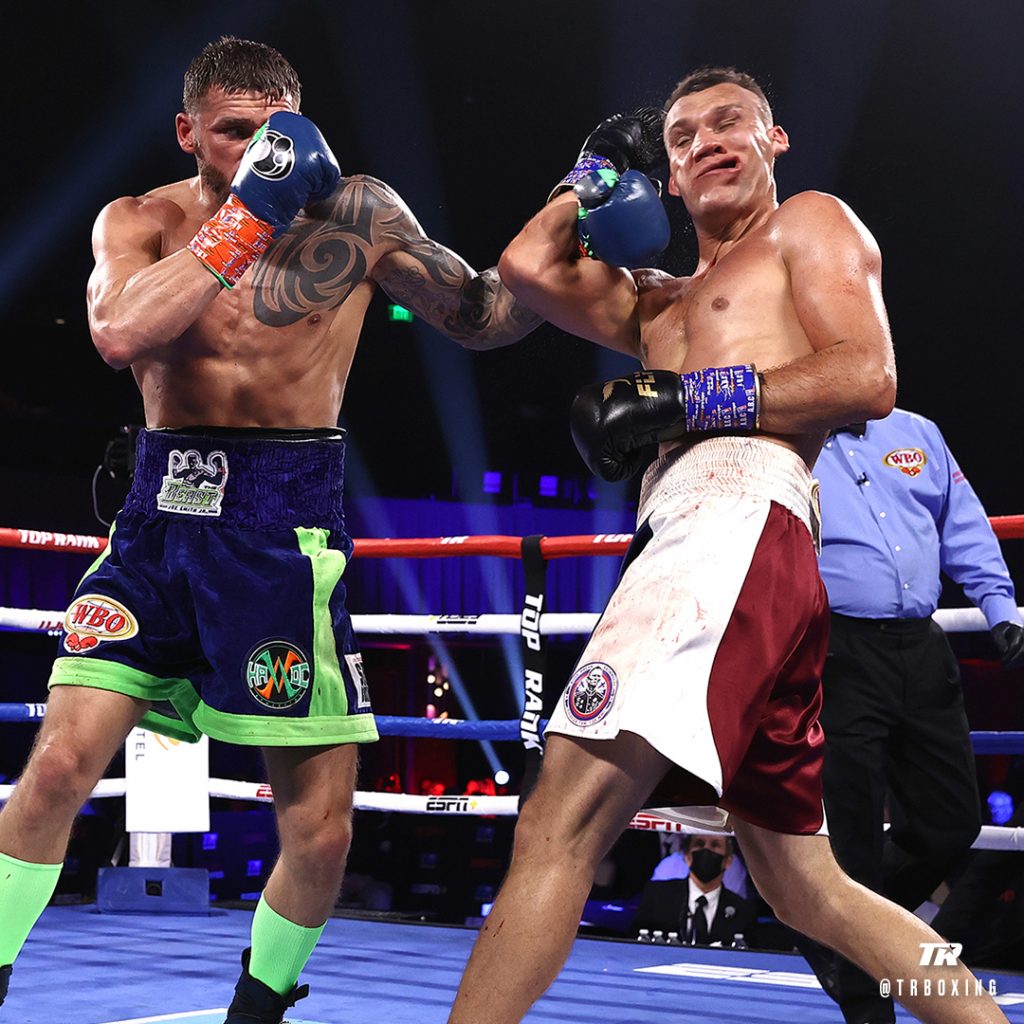 Now, Smith is counting down the hours until the fight and praying nothing derails it.

“I’m doing everything I can to make it to this fight without getting Covid or sick or anything again,” Smith told The Ring. “We’re so close. My wife (Kelly) took off of work and she’s been staying home and I’ve been going to the gym when no one’s there, training on my own with just my trainers.”

Smith (27-3, 21 KOs), 32, of Mastic, New York, on Long Island, said his wife, whom he married the week after the Vlasov fight was postponed and then went back to training for the rescheduled date, took off time from her job as a school administrator for the duration of this training camp. The reason was so she would not come in contact with anyone and risk bringing COVID-19 home.

Smith’s bout with COVID-19 last fall was serious enough that he had to be hospitalized.

“It was pretty bad,” Smith said. “I was sick for a little over two weeks. I wasn’t getting better and I just kept getting worse and worse. My wife actually forced me to go to the hospital and they kept me overnight and gave me some antibodies. The reason I was getting so bad was my blood cells weren’t fighting off the virus or were very low, so they had to give me some antibodies to help.

“I started to get better and within a week after that I was good. I took another week and started getting back into it and here we are and I’m feeling pretty good.”

Smith said despite the illness, he has made a full recovery and is ready to go for the fight.

“I have the normal weariness from training once in a while but other than that I feel great. Just ordinary stuff,” Smith said. “I don’t feel any different. I feel in great shape.”

The delay in his first defense has just made Smith more excited to fight again after achieving his goal of winning a world title. It came in his second opportunity after he challenged Bivol, coincidentally also at Turning Stone, in March 2019 and lost a one-sided decision.

Smith has won three fights in a row since, a decision over contender Jesse Hart, a ninth-round knockout of former WBO titleholder Eleider “Storm” Alvarez and the vacant title bout versus Vlasov.

“It’s like a weight lifted off my chest a little bit,” Smith said of his winning a world title. “I accomplished the main goal of becoming a world champion, but now I have other goals set for myself. I want to eventually try to unify. I’m hoping after this fight I get a shot at Beterbiev or redeem myself against Bivol or even fight the pound-for-pound king, Canelo.” 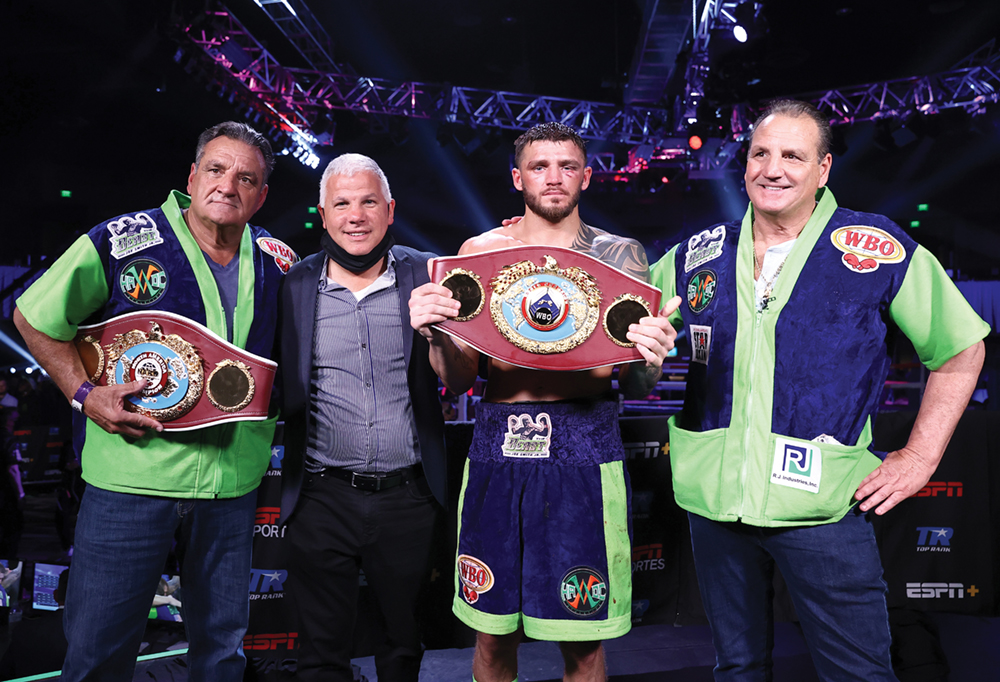 Life has not changed a whole lot for Smith since winning his title but if he keeps winning he knows it will.

He said it has “opened up new doors for” him and that he is finally about to get “to that next level of finally making some real money and also becoming known in the sport more.”

First up is Geffrard (18-2, 12 KOs), 31, who was already scheduled to face Gonzalo Andreasen in an eight-round bout this past Saturday night in his hometown of Delray Beach, Florida, so he should be in shape and on weight for the title opportunity.

Geffrard has not faced a top opponent but he has sparred with former unified titlist Sergey Kovalev and reigning unified titleholder Beterbiev.

“I give Steve credit for taking this fight on short notice,” Smith said. “He is a tough guy, and I expect him to bring everything he has for this opportunity. I’m ready to fight regardless of who is in the ring with me. My goal is the same, which is to defend my world title and keep it on Long Island where it belongs.”

A win could propel Smith into an all-New York showdown with former middleweight titlist Daniel Jacobs (37-3, 30 KOs), who is campaigning at super middleweight and is scheduled to fight John Ryder in London on Feb. 12 but would move up to light heavyweight to challenge Smith.

That fight is fine with Smith but he would prefer to unify.

“If that fight (against Jacobs) happens, great, but I want these big fights,” Smith said. “We just have to wait to see what happens. All I do is focus on my fight and see what comes of it.”

“(Beterbiev is) definitely tough. He showed that he’s got a lot of heart, but I believe anybody is beatable,” Smith said, referring to Beterbiev’s ninth-round knockout of Marcus Browne on Dec. 17 in which Beterbiev fought through a horrendous cut from an accidental head butt. “I believe I can be the man to beat him when I get a shot at him.”

As for Bivol, Smith has yearned for a rematch and believes he is a lot better now. “Every fight since my loss to Bivol I feel like I’ve improved,” he said.

Of course, a fight with Alvarez, the undisputed super middleweight champion and boxing’s biggest star, is Smith’s ultimate fight.

“That’s a big goal. That’s the fight everybody wants,” Smith said. “You hear him talking about possibly coming back to light heavyweight and trying to take over this division and it’s motivation to work hard and be prepared for it. I believe he’s the best, the No. 1 pound-for-pound fighter. He seemed to carry the weight well when he moved up (to fight Kovalev in 2019). I think he’ll make for a tough fight with anybody.”