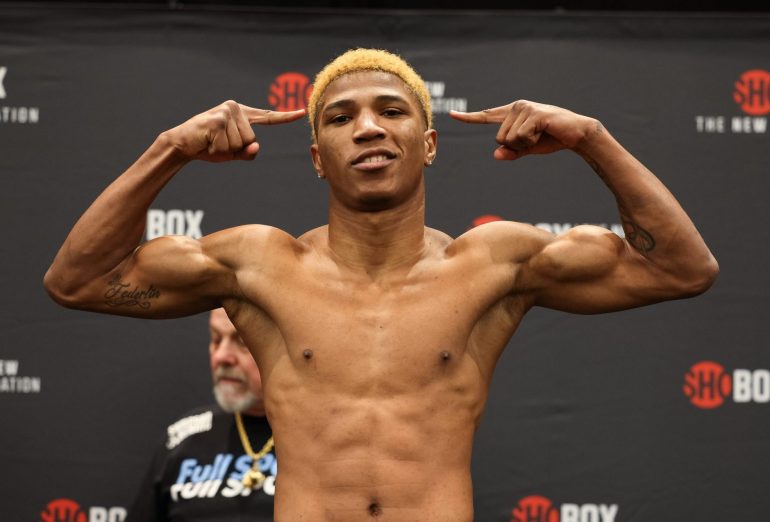 On Friday night from the Caribe Royale Resort in Orlando, Florida, Showtime’s ShoBox: The New Generation served up a bouquet of six fighters with unblemished records that promised to be sorted out as to who were real and who were not.

The spotlight was certainly on Luis “The Twist” Nunez.

Another undefeated fighter was placed in front of Nunez on Friday night in Carlos Arrieta, and “The Twist” showed once again that he may be a burgeoning talent at 130 pounds, stopping Arrieta at 1:41 of the 10th.

“The plan was to work (Arrieta) and I saw at the end that he was fading, and that’s when I started to attack,” Nunez told The Ring after the fight. “Then came the kayo. I hope for a lot of good things in the future, but everything is up to my manager (Antonio Tineo Sr.) and my promoter (Sampson Lewkowicz).”

Arrieta (14-1, 8 KOs) began opening up in the second, attacking the body. Nunez may have had the heavier hands, though Arrieta had the greater activity. Between the second and third rounds, Chelo Betancourt, Nunez’s trainer, told his fighter he sensed that Arrieta was tiring after two rounds. Betancourt told Nunez to let Arrieta come forward and catch him coming in. It was sound advice that carried prescience.

Nunez worked up well up and down, landing a big left to the head with 1:28 left in the third. Arrieta’s work rate appeared to slow down in the third. He didn’t answer Nunez as quickly as he had in the first two rounds. Arrieta, however, still kept investing in the body.

In the fourth, Arrieta began coming forward again. Nunez, by then, seemed to find his range. His jab kept Arrieta at a comfortable range, and that opened the overhand right, sneaky body shots and short uppercuts.

Round after round, Nunez’s superior skillset won out over the Arrieta’s gritty approach.

Where Nunez admitted there was hesitance in stepping on the gas against Garnett in September, he didn’t this time. With 1:57 left in the 10th round, Arrieta, his left hand down despite getting smacked with overhand rights all night, got caught with a pulverizing counter right to the face.

The punch buckled Arrieta’s knees and Nunez, seeing Arrieta in trouble, attacked and this time closed the show, raining a barrage of punches on Arrieta. Referee Frank Gentile saw enough and waved it over at 1:41.

“That was the final nail when I hit him with that straight right hand,” Nunez said. “Once I landed that, I knew he was gone.”

In the co-feature, Otar “Pitbull” Eranosyan had surprising ease beating Starling Castillo by eight-round unanimous decision in a lightweight bout 80-70 (2) and 79-71.

In the first round, Eranosyan (11-0, 6 KOs) knocked down Castillo down twice. The first came from a picturesque left hook, catching Castillo (16-1, 12 KOs) cleanly on the jaw. In a stunned state, he tried hanging on to Eranosyan to prevent himself from falling. Eranosyan shook him off and down went Castillo. Later in the round, Eranosyan caught Castillo flush on the chin with a counter right.

Once again in the second, Eranosyan plowed Castillo with a left, but the 26-year-old from the Dominican Republic absorbed it better.

Eranosyan wouldn’t let Castillo breathe. The 28-year-old Georgian constantly smothered Castillo. He closed the sixth with a blunt right, which Castillo nodded, implying the shot didn’t hurt, when it was pretty evident that it did.

Judges Erik Larsen and Alexander Levin each had Foster by 77-74, while judge Efrain Lebron somehow saw it 77-74 for De Los Santos.

A southpaw, De Los Santos, 22, started well in the opening two rounds, landing the heavier punches. But Foster, 28, climbed back by the fourth, when a headbutt opened a cut over De Los Santos’ left eye with 1:33 left in the round. After being warned for holding, referee Frank Gentile deducted a point from De Los Santos for excessive holding.

In the fifth, Foster (14-0, 9 KOs) turned into the stalker, pecking to the body to shrink De Los Santos’ resolve. By the sixth, De Los Santos (13-1, 12 KOs) looked like he was out on his feet. His energy level appeared to be depleted.