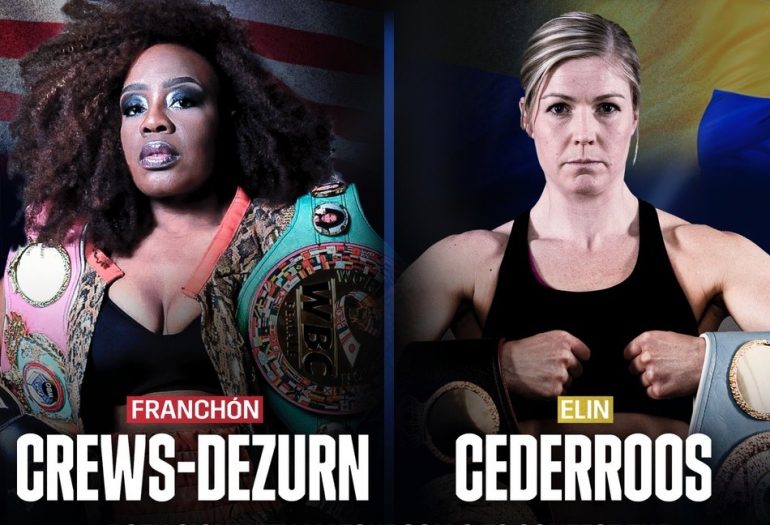 Months after its original scheduled date, The Ring’s inaugural women’s super middleweight championship fight is closer to becoming a reality.

Franchón Crews-Dezurn and Elin Cederroos have signed promotional deals with Eddie Hearn and Matchroom, and they will meet for the undisputed title in the spring.

All four major title belts will be at stake, and since they are the top two super middleweights in The Ring’s Women’s Ratings, the winner will also lift the first-ever Ring belt in the history of this division.
WBC/WBO champion Crews-Dezurn (7-1 2 KOs), rated No. 2 by The Ring at 168, officially defends her straps for the first time, after the first defense of her WBO and second of the WBC against Alejandra Jiménez in January 2020 was declared a no contest after Jiménez failed a drug test. Crews-Dezurn won the WBC crown in just her fifth pro fight in August 2018, edging out Maricela Cornejo and added the vacant WBO strap in her first defense of the WBC belt when she rematched Cornejo 11 months later.
IBF/WBA champion Cederroos (8-0 4 KOs), rated No. 1 by The Ring, is an undefeated former pro soccer player-turned elite fighter who will be looking to add the Virginia fighter’s belts to her straps and make it back-to-back wins over American fighters in her second fight in the US. The 36 year old made her Stateside bow against Alicia Napoleon-Espinosa in Atlantic City in January 2020, crucially flooring the New Yorker in the second round on the way to unifying the IBF strap with Napoleon-Espinosa’s WBA title by one point on all three cards. “It’s no party without The Heavy Hitting Diva!” said Crews-Dezurn. “I’ve worked and earned everything I have so if Elin or anybody else think they will take shit from me they truly have me mistaken. “I really don’t wanna talk, I’m just going to bring that action for the main attraction and get everything I deserve. It’s about legacy and survival so I appreciate Eddie Hearn, Matchroom, DAZN and Peter Kahn for making this happen. It’s my time to live up to my own expectations I’m great!” “I have been ready for this fight for a long time now,” said Cederroos. I am grateful that Matchroom and DAZN has given us the opportunity to make it real. It going to be a prestigious fight for the world of boxing and a big step for women’s boxing. “Hopefully I will be able to show my true power. We come from the land of the ice and snow.” “This is a great unification fight between two top class fighters,” said Hearn. “I am delighted to welcome Franchón and Elin to the Matchroom stable, and one of them is going to have all the belts at 168lbs in the spring and can use that as a springboard to becoming a household name and a global force.” A date and venue for the undisputed clash between Crews-Dezurn and Cederroos will be announced soon.