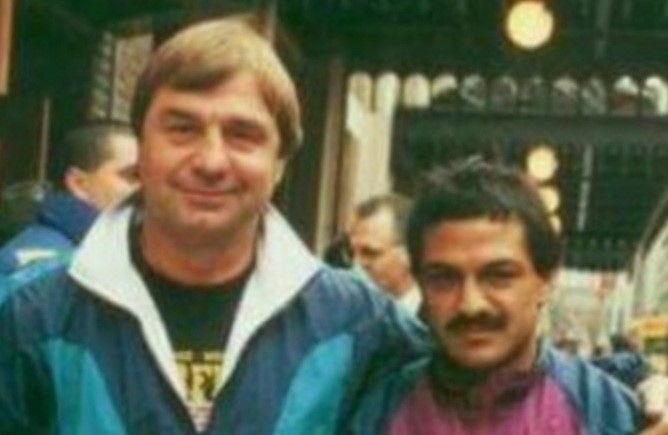 Reid, the oldest of three children, was born in East Los Angeles on July 5, 1942.

“We didn’t have a lot of money but we all stayed together,” Reid told The Ring. “We lived in the back house and my grandmother had the front house. Every Sunday we’d get together, eat and have fun.”

When his parents divorced, Reid lived with his father, who had a drinking problem. He needed to provide for his younger siblings and was heavily influenced by his uncle.

“When I was 13, I was working on my uncles rubbish route in East LA,” recalled Reid. “He owned rubbish trucks that picked up DuPont paint. I’d get up at three in the morning and go to work with him. I worked for him and then I’d go to school.”

As well as working a manual job in his teens, Reid graduated from school and excelled in sports.

“I played baseball, football and basketball at LaPuente high school,” he said. “I was all-state quarterback and a defensive free safety.

“I had [future Los Angeles Dodger manager] Tommy Lasorda scout me in high school. [He] wanted to sign me with the Dodgers. I was a catcher. We won the CIF championships and I hit a grand slam against Chaffey high school and he was at the game scouting me. My mother yelled out Tommy Lasorda was there and I’ve been a Dodger fan ever since. I told him I didn’t want to play baseball; I want to play football.”

Reid, however, was drafted into the navy in 1964 and served for three years.

During this time Reid was stationed in Japan and looked to be heading for Vietnam. He was told by the chief of naval personnel that he needed to find another sport to keep him in temporary duty assignment. It was then that he first came across boxing.

“In boot camp, they had what they call smokers (unregulated boxing matches),” recalled Reid. “I had never fought but I had trained with my uncle, who fought in the army. He taught me how to hit the heavy bag and to get into shape, but I never really had training. I ended up winning four fights in smokers and I got a lot of attention from it.

“I thought, I’ll try boxing, and once I got into it, I loved it so much, I didn’t even think about football anymore. All I did was box.”

Reid estimates that he had over 200 amateur bouts and won two national titles while in the services. He had aspirations of fighting at the 1968 Olympics, but a cut curtailed those plans.

The scrappy youngster would eventually be given honorable discharge from the navy to pursue a professional boxing career.

Reid got in touch with Jackie McCoy, who was a highly regarded boxing manager out of the famed Hoover Street gym in LA. McCoy was only too happy to sign Reid and the two worked together for a few years. However, after Reid lost to Rudy Robles in a state title fight, the old sage used his greater knowledge to point Reid in a different direction, one that would change his life and allow him to find his true calling.

“He told me, ‘You’re not a boxer, you’re more of a fighter and I don’t want to see you get all beat up. Would you like to coach?'” Reid remembered. “I had never thought of it. He said, ‘Let’s try it.’ The first fighter I trained was Rodolfo Gonzalez in the 1970s. He had 12 fights with me and I turned him around. He beat Chango Carmona for the [WBC lightweight] world title. Jackie McCoy says, ‘You son of a gun. I’ve been in this business almost 30 years, I had three world champions and your first fighter wins a world title.’

Albarado won the undisputed junior lightweight title from Koichi Wajima in Japan and although he lost them in a rematch, Reid’s star continued to rise.

Bruce Curry reached out to Reid and asked if he would manage him. Reid bought Curry’s contract from Dave Gorman for $1,200 and within a couple of years, Curry also became a world champion.

The good work didn’t go unnoticed and he became the in-house coach of the HBA (Houston Boxing Association), fronted by Josephine Abercrombie.

“They were signing a lot of amateur fighters,” Reid said. “They gave me a list: Calvin Grove, Iran Barkley, Frank and Thomas Tate, Gabe Canizales, and they said there’s a young brother, Orlando. My son said, ‘There’s something about [Orlando], he’s very special.’ I took a look at him, he was 14 or 15. They signed him and I spent a lot of time with him and within four or five years he was winning everything. It developed into a great relationship. He didn’t talk too much, [but] when he got in the ring, he kicked the shit out of everything that was in front of him. Just a beautiful guy to work with.” 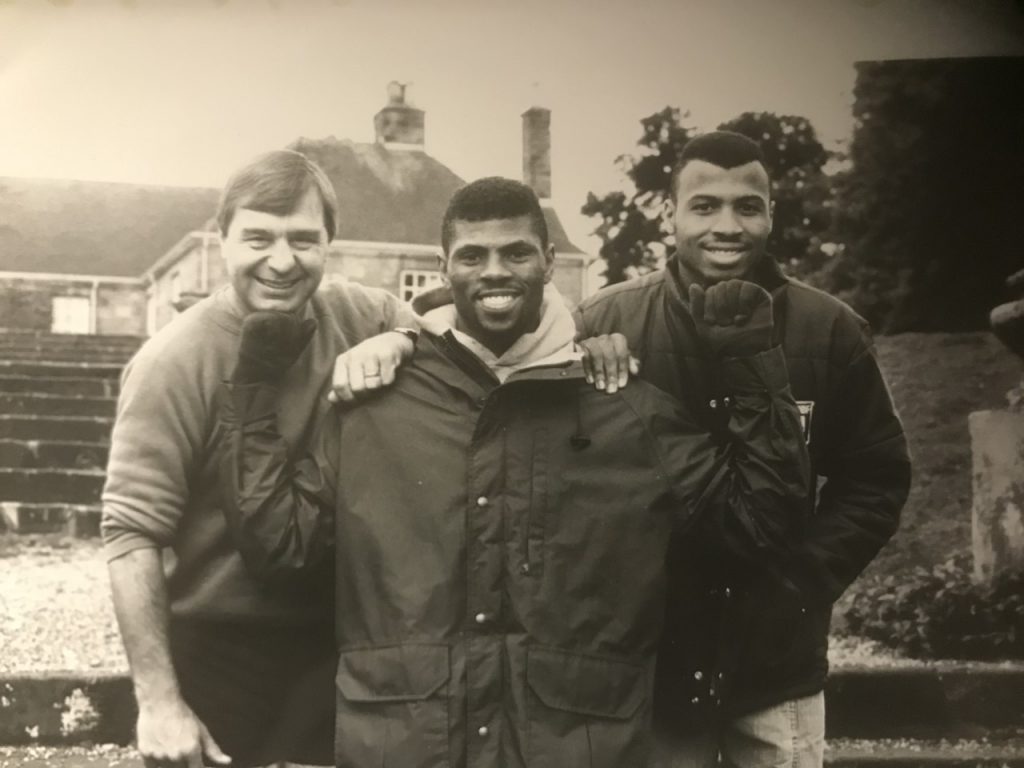 Canizales flourished under Reid’s guidance and went on to make a record 16 defenses over a six-and-a-half-year title reign.

Reid’s impressive work with Canizales ingratiated him with the late, great Johnny Tapia. They worked together ahead of the eagerly anticipated grudge match with fellow Albuquerque native Danny Romero in July 1997.

Reid was an integral part of the infamous sparring session between his fighter Paul Spadafora and Floyd Mayweather Jr. at Richard Steele’s gym in Las Vegas in the summer of 1999.

“Floyd Sr. came over and said, ‘Would you like to box my son?’” Reid recalled. “I said, ‘Great idea, but I can’t do that now. In two weeks we’re fighting [Israel] Cordona for the [vacant IBF lightweight] title. He started talking shit and Paul heard it and said, ‘What do you think about it, Jesse? Me and Mayweather boxing together?’ He didn’t like what they were saying and wanted to do it.”

Both sides agreed to rendezvous at the same venue for a high noon sparring session on the Saturday.

“Everyone came to see Mayweather kick the shit out of Paul Spadafora,” continued Reid. “I told Floyd Mayweather Sr., ‘I’m so confident you’re going to be sorry for what you’re doing, I’m going to tape it.’ He said, ‘You can do anything you want, we’re going to knock him out in the first round.

“After the second round was over, I looked at all those bullshitters talking their crap and every one of them was as quiet as a lamb. Mayweather come over in the fourth round and said, ‘Jesse, I’m tired, I can’t go six rounds.’ I said, ‘If you don’t go the six rounds, I’m going to tell everybody what a coward you are.’ He’s a proud guy so he said he’d do it. He was exhausted, he had a black eye and his nose was bloody. I taped it for like two minutes of him laying on the ground. He saw me taping it and jumped up. I was the one who put it on YouTube.

“They say he was in no shape; you don’t get in the ring out of shape. Top Rank wanted the tape. I told them it was my tape and they were mad as hell.

“[Mayweather’s] such a smart guy, he never got out of shape after that. He stayed in shape the rest of his career. It taught him a lesson.”

Reid, 79, is married to Sheryl and the couple live in Las Vegas. They have a daughter named Karen, but their son Jesse Jr., who also boxed, tragically passed away in 2018.

Looking back, Reid, who still dabbles in training, is thankful for his career in boxing.

“It was a lot of fun training,” he said. “I worked with guys like Johnny Tapia, Roger Mayweather and [Hector] Camacho. Even though they were crazy dudes, I had a way of making relationships with them. They trusted me and fought their arses off.”

The veteran trainer graciously took time to speak to The Ring about the best he trained in 10 key categories.

BEST JAB
Jesse Burnett: His jab was like a piston. He set the table with that jab, your head popped up and he’d take your head off with a right hand or hook. He had a really sneaky jab. I had a lot of fighters who had a good jab: Orlando, Johnny Tapia, but none of them could do what Jesse could do with a jab.

BEST DEFENSE
Orlando Canizales: Orlando was kind of sneaky. He had tremendous speed, great angles. He was probably one of the best angle fighters. Orlando was a great feinter. Reggie Johnson and Johnny Tapia had great defense.

BEST HANDSPEED
Johnny Tapia: Extremely quick hands and boxed better than people give him credit for.

BEST FOOTWORK
Canizales: Definitely Orlando. I worked with him for three or four years on his angles and his footwork on a tire, shifting his feet, and being more aggressive. He was more a counter puncher when he was an amateur.

SMARTEST
Paul Spadafora: He had reflexes like a mountain lion. When he was clean, nobody could touch him. If Paul had stayed away from the drink and drugs, there’s no telling how many title defenses he would have had. He could read fighters and know what he could do with them. He just had a way about him. He was very relaxed and confident. He wasn’t even a puncher and he would stop guys. He was clever and would wear you down.

STRONGEST
Lamon Brewster: He was so strong and such a big puncher. He asked me how to beat the bully and I said, ‘You bully him.’ He went out there in the first round and dropped [Andrew] Golota three times and stopped him. He was a very strong guy.

BEST CHIN
Tapia: Johnny Tapia and Orlando both had great chins. Orlando was never hurt or knocked down but he didn’t get hit a lot. Johnny Tapia had a great chin; he fought a lot of big punchers. They both had great chins, but Johnny got hit and went right through it – it didn’t even phase him. He’d take the blood off his nose, lick it and want to kill [the opponent] – just a tough guy.

BEST BOXING SKILLS
Reggie Johnson: He could box his arse off. Reggie went from middleweight to light heavyweight champion. I have a lot of respect for his boxing ability.

BEST OVERALL
Canizales: He was a trainer’s dream. I had him from when he was 14 years-old. He did so many things, he was a great fighter. There’s a lot of great fighters I had, but he was champion six-and-a-half years. He has to be the best.