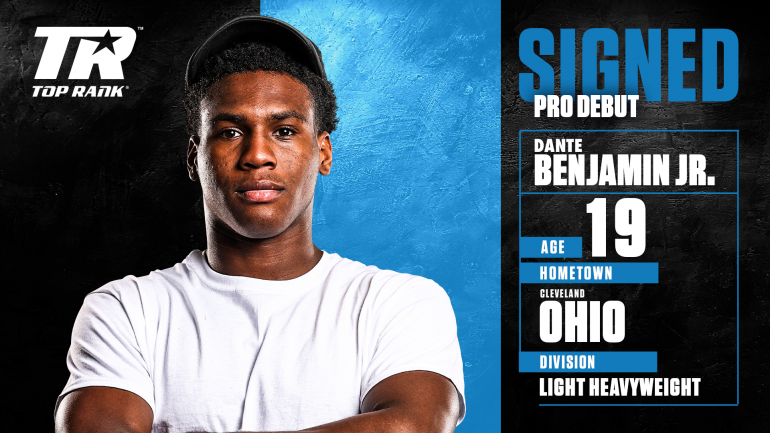 The 19-year-old will make his professional debut in a four-round bout Saturday, Jan. 29 on the Robson Conceição-Xavier Martinez undercard in Tulsa, Oklahoma. Benjamin is the latest young talent from Cleveland to sign with Top Rank, joining 17-year-old lightweight Abdullah Mason (1-0, 1 KO) and welterweight U.S. Olympian Tiger Johnson (1-0, 1 KO). “I’m going to take advantage of this opportunity. Being a professional boxer at the highest level is something I’ve wanted to do since I was a kid,” Benjamin said. “I’m living out one of my dreams, and I am driven to win a world title. I’m proud to represent my city. I’m hungry to be great, and that’s why I bust my butt in the gym every day.” Benjamin starred for USA Boxing, notching more than 100 amateur victories and winning gold at the 2016 and 2017 Junior Open Championships, 2018 Youth National Championships, and the 2019 Emil Jechev Memorial Tournament in Botevgrad, Bulgaria. He first walked into an East Cleveland boxing gym at the age of 7, where he met noted trainer Renard Safo. More than a decade later, Safo is still Benjamin’s head trainer.Benjamin embarks on his professional journey with a heavy heart. His father, Dante Benjamin Sr., battled kidney disease for a decade before passing away last March at 49. It was Benjamin Sr. who brought his son to Safo’s gym and encouraged him to continue after early struggles in sparring. Benjamin won his first Silver Gloves title roughly one year after picking up the gloves. Benjamin said, “My father taught me how to work. He got me into boxing, and when times got hard, he still took me to the gym every day. Before he passed away, we talked about me turning pro. If he was still here, I know he’d be proud of me.”

“Dante Benjamin Jr. has the makeup and the amateur pedigree to be a tremendous professional,” said Top Rank chairman Bob Arum. “Cleveland has produced some of our nation’s top emerging fighters, and I look forward to Dante, Tiger and Abdullah bringing big-time boxing to their city for years come,” stated the veteran promoter about his new charge, who has also excelled as a basketball player.